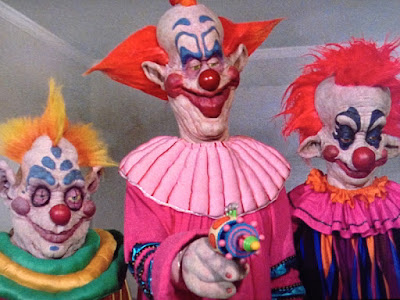 I should say at the outset here that I went into this with my eyes open. With a movie called Killer Klowns from Outer Space we’re talking less Citizen Kane and more The Terror of Tiny Town; less The Lost Weekend, more Weekend at Bernie’s. There aren’t going to be a lot of surprises with this film given its name. It’s clearly going to be at least partly comedy, and it’s not going to be the highbrow sort.

So, what’s the story? A town gets invaded by clown-themed aliens. These aren’t aliens that have something vaguely clown-like about them; these are full-on clown themed. They have clown hair, red bulbous noses, wear clown outfits, and attack with clown-themed weapons. These include a gun that wraps up its victims in a cotton candy-like substance, a gun that shoots popcorn, and thrown pies that are apparently made out of some sort of acid.

This is also a movie that depend on the idea that virtually everyone in the town that is being invaded is stultifyingly stupid. No one seems capable of looking at the mutant space clowns and figuring out that they aren’t really clowns. These things are clearly not human. They’re misshapen, have gigantic teeth…there’s something hugely off about them, and no one seems to notice that they are horrifying monsters. Why? Because everyone in this movie is really dumb.

Killer Klowns from Outer Space starts pretty much like you expect an outer space invasion movie to start. It’s the alien invasion starting point that we’ve seen in The Blob, or Slither, or The Day the Earth Stood Still, or just about any other outer space invasion movie you can think of. A group of kids at the local small-town make out point see something that looks like a meteor land close by. Naturally, this is first encountered by a farmer, who goes to investigate and finds out that rather than a meteor, there is a giant circus tent.

From there, we are introduced to our various heroes and our villains. The heroes include the improbably named Mike Tobacco (Grant Cramer), his girlfriend Debbie Stone (Suzanne Snyder), her local cop ex-boyfriend Dave Hansen (John Allen Nelson), his partner Curtis Mooney (John Vernon), and the two local pranksters Rich (Michael Siegel) and Paul Terenzi (Peter Licassi). The town itself has more than its share of circus-themed things, including the Terenzi’s ice cream truck and a circus themed restaurants.

The bad guy clowns are, well, clowns. As mentioned above, everything they do is overtly clown-like. There’s even a suggestion at some point that they may have once been ancient visitors and our own notions of clowns come from earlier contact with them. The clowns (or, technically, Klowns) use a variety of clown-y traps and weapons to capture and kill humans for food. The humans fight back after the initial problem of dealing with getting people to believe in evil space clowns. A little less than 90 minutes later, roll credits with the outer space evil defeated.

So let’s talk about just how dumb everyone is. I’m going to take as my subjects for this the Terenzi brothers. While they are fully aware that there are evil clowns, but the only way they’ll even consider helping to fight them off and try to rescue Debbie when she is captured is because Mike tells them that Debbie has two large-breasted roommates that might be in danger as well. Toward the end of the film, the Terenzis encounter a pair of female Klowns, and their first thought is to wonder if those might be Debbie’s roommates. Because of course Debbie is rooming with a pair of evil space clowns. Of course she is.

The movie can’t even remember its own narrative thread in places. Remember that there is a sort of love triangle here; Mike is dating Debbie now, and Debbie used to date Dave. By the end of the film, it’s Dave who is nuzzling the rescued Debbie while Mike seems unbothered by the fact that these events have caused him to lose his girlfriend.

The ultimate sad truth of Killer Klowns from Outer Space is that it is not smart enough nor stupid enough to really be any good. If it were smarter, we’d end up with something potentially like Slither or Shaun of the Dead that had a strong humor element but still managed to be a horror movie. Even aiming for something like Night of the Comet would get us to that place. But it’s not that smart. If it were a lot dumber, it would work entirely as camp, but it doesn’t go that way, either. Instead, it’s in a middle ground where the characters are too dumb to be believable and too smart to be parody. It needed to be much more one way or the other.

This isn’t one I feel the need to see again.

Why to watch Killer Klowns from Outer Space: If the name of the film makes you smile even a little, this film was made for you.
Why not to watch: It’s even dumber than you think it’s going to be.