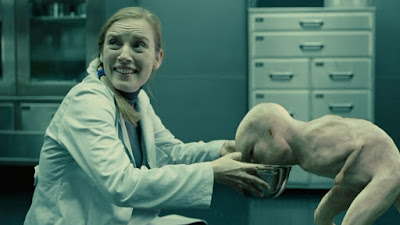 I really don’t like Splice. I didn’t like it the first time I saw it, back when Nick Jobe and I did a podcast together and I didn’t like it this time when I watched it. While I think it gets the creature effects done pretty well, it gets everything else wrong. Splice only works as a story if we have a bunch of very, very smart people acting in very, very stupid ways and making the absolutely wrong decision every time a decision needs to be made. People make mistakes; I get that. But these people make literally every mistake they can, including a few that are so ridiculous they almost defy coherence.

Elsa (Sarah Polley) and Clive (Adrien Brody) are both a couple and a couple of genetic engineers who are attempting to create new life by, well, splicing DNA from a bunch of different species to make a new species. The hope is that all of the splicing and genetic synthesizing will create new critters that will be little biological factories for new medical marvels (think Alzheimer’s and diabetes cures). The movie starts with the “birth” of Fred, a male blob critter, to match up with their previous blob critter, Ginger. Fred and Ginger meet, imprint on each other, and everything seems to be good.

Elsa and Clive take their findings to their bosses William Barlow (David Hewlitt) and Joan Chorot (Simona Maicanescu) with the hopes of moving to their next obvious experiment—adding human DNA to the mix. The bosses immediately nix that idea, since it’s illegal. The position of the scientists is that using human DNA is necessary for creating creatures that can produce substances that will work for human diseases. Naturally, despite being told not to go there, they do, and create a new creature.

This creature, ultimately dubbed Dren (played by Abigail Chu initially, then by Delphine Chaneac) grows rapidly and has a number of human characteristics, including intelligence. Dren becomes essentially full grown in a few months. Meanwhile, the Fred and Ginger creatures become an embarrassment when, at a public unveiling, they kill each other because Ginger has transformed into a male. Neither Elsa nor Clive realized this because they were spending so much time with Dren. By this time, Dren has been moved to a farm owned by Elsa to keep her out of public scrutiny, despite Clive’s brother Gavin (Brandon McGibbon) having discovered her.

I’m going to stop with the plot rundown here and jump right into the problems with what the characters do. It’s a common problem with many movies that things happen not because of the choices the characters make, but the characters make choices because of a particular place the filmmakers want the story to go. That’s absolutely the case here. Virtually every decision these characters make happen because the plot demands that certain events take place. To get there, we have to have our scientists—specifically Elsa and Clive—make the stupidest choices possible time after time.

This starts, of course, with their decision to create Dren in the first place. When Dren is “born,” it attacks Elsa with a poisonous stinger it possesses. Why the hell would they create a creature with a poisonous tail? At every opportunity, when the clear choice is to destroy Dren (especially before Dren is named), Elsa refuses. Once taken to the farm, Dren escapes and kills and eats a rabbit. In Elsa’s world, though, Dren does not eat meat and has no carnivorous or hunting instincts. Elsa treats Dren like a human child, educating her, and at one point putting cosmetics on her despite discovering that Dren is clearly becoming both a sexual being and is obsessed with Clive.

This doesn’t even get to the fact that Clive eventually has sex with Dren. Roll that around in your head for a second.

One of the most common tropes for movies that mix science fiction and horror is that science is to blame ultimately for the horrors that happen. I get that. We mess with things that we don’t fully understand, and terrible things can result. In the better versions of this story, it’s science that eventually corrects the problem as well. In the lower-rent version of this story, the scientists are to blame at every step in the unfolding problem. Science creates the problem and science continues to make the problem worse. More significantly, the scientists are not merely dumb and creating the problems being experienced, they are repeatedly reckless, a word that in the real world is typically not used with actual scientists.

I get it: science can be scary and difficult. I also don’t care, because it’s lazy. We already live in a world (and Americans live in a country) where science is seen as the enemy over and over again. Millions of people willing to accept the fruits of science are also quick to claim that science is evil or wrong because of what their holy book happens to say. It doesn’t help the conversation when over and over, science is turned into the villain. It especially doesn’t help in a case like Splice where the worst fears of an uniformed public are given an alien face, fueling even more resistance to the potential benefits of genetic work.

Splice is a stupid movie filled with stupid characters. Worse, those stupid characters are supposed to be smart and are presented to us not only as accomplished scientists but as what scientists are really like. Worse than being simply a bad movie, it’s a damaging movie, one that hurts the conversation that needs to be had.

Why to watch Splice: The creature effects are pretty good.
Why not to watch: It may as well have a banner across it saying, “Science is bad.”