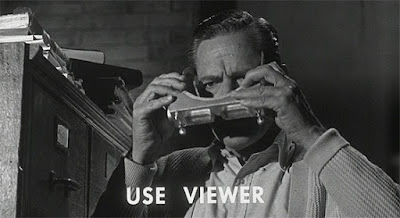 I do have a warm, squishy soft spot for William Castle. None of his movies were ever really that great, but they were pretty much all a lot of fun. Castle was the master of the gimmick, creating electrified seats, floating skeletons, selling life insurance to the audience in case they died of fright, and more. With 13 Ghosts, the gimmick was something Castle called “Illusion-o.” It was more or less a play on 3D glasses. At certain times in the film, the audience could put on the glasses and see the ghosts on the screen. I’ve seen the film both with the optional ghosts (note the text on the picture above) and where the ghosts simply appear. Honestly, it’s pretty much the same film either way.

Like most of Castle’s pictures, 13 Ghosts much more about the staging than it is about the actual scares. The ghosts here are pretty laughable, my favorite being the ghost of a French chef who is adorned with the most ridiculous comic mustache seen outside of a pantomime melodrama. I honestly don’t see how much of this could have been frightening even in 1960. No, like most of Castle’s films, this is the veneer of horror. It’s a carnival spook house ride dressed up with the supernatural.

This is a haunted house story, so the first thing we have to do is get our hauntees into the house. Enter the Zorba family. Father Cyrus (Donald Woods) is a paleontologist and appears to be a decent guy and a good father, but he doesn’t have much of a head for money. When the film starts, his wife Hilda (Rosemary DeCamp) is phoning him at work, telling him that all of their furniture is being repossessed because they are three months behind in their payments and have only a couple of dollars in the bank. That night happens to be son Buck’s (Charles Herbert) birthday. He wishes for a house with furniture, much to the delight of his older sister Medea (Jo Morrow).

Before you can blink, a telegram shows up telling Cyrus to head to the law offices of Benjamen Rush (Martin Miler!) the next day. He and Hilda go and discover that Cyrus’s eccentric uncle Plato has died and willed him his completely furnished (and paid for) house, complete with housekeeper (Margaret Hamilton!). It also comes with a dozen ghosts. It seems that Cyrus was quite the man for the supernatural and had discovered a way to not only find ghosts, but to capture them. His notes suggest that he has captured 11 of them, but his untimely death has made him the 12th ghost. To be freed, they need a 13th. Oh, and for added fun, a month or so before he died, Plato liquidated his assets, converted everything into cash, and hid it somewhere in the house.

One of the joys of William Castle movies in general is that it was never really clear if there was anything supernatural going on or not. Some of his films have entirely mundane explanations while others actually do delve into the supernatural. 13 Ghosts does both. We’re led to believe that the ghosts are really haunting the Zorba house and, at least for the characters on screen, are not being produced by some mundane means. There’s also a non-supernatural element here as well. Sadly, because Castle never had a huge budget to work with and probably didn’t have a great deal of time to bust out a script, it’s not that hard to figure out who might be responsible for what is happening. There are legitimately only a couple of people it could be.

13 Ghosts is probably not going to be anyone’s favorite movie, but it’s also going to be the sort of film that I think most people will have a little soft spot for. It’s fun, and that’s exactly what it’s supposed to be. We’re supposed to understand that Buck is the sort of gullible child who really only exists in movies because we need Buck to be that way to move the plot along. We need to buy into Cyrus’s boss (John Van Dreelen) to completely buy into the paranormal and also to be completely versed in obscure Latin because again, the plot needs it. It’s not supposed to make sense. It’s supposed to be entertaining.

I wish they had done more with the ghosts. They don’t show up very often, and they’re not very scary. In fact, Buck encounters a lion ghost and a headless lion tamer, then walks up the basement stairs and has breakfast, commenting on the experience like it was seeing his friend down the street. They’re not only not that scary, they aren’t around enough to make more than a simple impression except for the séance scene near the end. Even then, it’s over too quickly.

Truthfully, 13 Ghosts needed to be about 10 minutes longer, and that 10 minutes should have dealt entirely with the ghosts themselves. As it is, it’s fun and harmless, and not a bad way to kill 82 minutes.

Why to watch 13 Ghosts: William Castle was a treasure.
Why not to watch: It’s not really that scary.