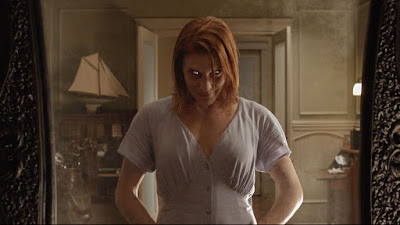 It’s been a pretty constant mantra on this blog that I tend to like horror more when it doesn’t go for gore but goes for genuinely scary instead. Sure, there are exceptions to that, but it’s a lot harder to genuinely scare an audience and it’s easy to gross them out. Gore is fine when it makes sense or, in those rare cases when it’s clearly the point of the movie. Oculus is a movie that eschews gore and goes for creating an atmosphere of dread and terror. It does this by never really letting the audience know what is going on at any time, or just giving us glimpses here and there. It’s all about the atmosphere here, and all about using that atmosphere to keep the characters (and the audience) off balance.

Oculus takes place in two different timelines that are of roughly equal importance. There is a current timeline that takes place in roughly the film’s present of 2013. The earlier timeline takes place in 2002, focused on much younger versions of our two main characters. Rather than jumping back and forth here, it’s probably easier to handle the stories in a more linear fashion. The truth is that the early timeline story exists mainly to give us context for the present-day story, so it’s actually pretty quick to understand.

And that’s what we’re going to see in the flashback. The Lasser Glass seems to get energy by absorbing life from things around it, generally starting with the easier targets. In the Russell household, such low-hanging fruit is the plants around the house and eventually the family dog. The mirror also puts a number of strange and terrible visions in the heads of the parents. Eventually, mother Marie (Katee Sackhoff) goes completely insane and ends up locked and chained in her bedroom. Alan has his own issues, though, essentially ignoring everything around him until children Kaylie (Annalise Basso) and Tim (Garrett Ryan) are forced to call neighbors for help. But the power of the mirror prevents even this from helping. Eventually, Alan and Marie go completely off the deep end. Alan shoots Marie and prepares to kill Kaylie. Instead, in a moment of clarity, he gives the gun to Tim, who shoots his father.

Now, in the film’s present, we’re about a dozen years past those initial events. Tim (now played by Brenton Thwaites) has just been released from a mental facility, since he not only killed his father (while that would be justifiable given the situation), but also because he claims his parents went crazy because of the mirror in his father’s office. Kaylie (Karen Gillan as an adult) has spent a great deal of the past dozen years looking into the history of the mirror. She’s even gotten a job at an auction house and has tracked down the mirror itself. Using her influence, after the mirror is sold at auction, she has it transferred to the family house that has remained unoccupied since 2002. Now, with Tim out of the facility, she wants to confront the demons inside of the mirror once and for all and put them to rest. But, importantly, she wants to first prove that her brother was not insane and that he was not responsible for his actions in 2002.

Oculus works for a number of reasons. One of the main reasons it works is because of the differences between the 2002 story and the 2013 story. The mirror doesn’t really affect Kaylie and Tim in the earlier story, spending more of its efforts on the parents. Because of this, the 2002 story is very linear. The mirror shows up, things start to get weird, and eventually all hell breaks loose. However, in the 2013 story, the mirror is actively screwing with the minds of Kaylie and Tim. What we see happen to their parents from their perspective in the first story we see happening from their point of view in the second. This is really interesting.

What’s also done really well here is exactly what it means for the mirror to play with someone’s mind. Kaylie, having done her research, knows what the dangers are. She has set alarms for herself and Tim to make sure that they eat and drink regularly. She’s set up plants around the house to determine the mirror’s area of effect. Her fiancé (James Lafferty) calls her regularly on the hour. What Kaylie hasn’t taken into account is that the Lasser Glass not only plays with the mind of its potential victims, it also plays with their reality. As the film progresses, we see over and over that what we think is happening, what Kaylie and Tim think they are seeing and what is actually happening are often very different.

This is specifically why Oculus works as well as it does. Rather than being given a story where there is an “evil thing” that we need to see destroyed with lots of gore and nastiness, instead we’re given a story that really is there to play with our perceptions and the reality of what we are experiencing. This is what makes everything in the film work as well as it does. We, as members of the audience, are pretty much always willing to accept what we see on the screen in front of us as what is happening. Over and over again, we’re shown that we should trust nothing, and that Kaylie and Tim should trust nothing, either. How does Kaylie know that the phone call she just received was from her fiancé? How does she know she’s really drinking water when she thinks she is? We’re shown over and over that the mirror can make people think what it wants and can alter their perceived reality.

By going for upsetting and creepy, by trying to play mind games with its audience rather than going for inducing vomiting, Oculus proves itself to be smarter than the average horror film. I appreciate that and wish more films would do it.

Why to watch Oculus: Goes for scary instead of gross.
Why not to watch: It’s a little hard to follow at times.