Ten Days of Terror!: Taste the Blood of Dracula 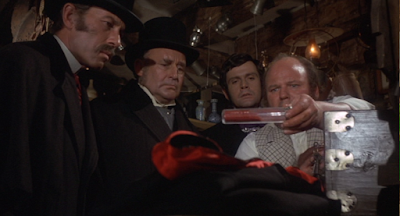 Evidently, Christopher Lee played Dracula more than anyone else in film history. I think that makes sense. He also apparently ended each film by claiming that he’d not play the role again until Hammer Studios convinced him to take it up just one more time. Taste the Blood of Dracula is clearly a film in that vein, since Lee, the titular character, is barely in it and has only a couple of lines. There are times when this works—in Horror of Dracula, Lee is absent from much of the film, but he casts a huge shadow over everything that happens. Here, he simply doesn’t. He’s there, but in most cases, he’s almost a non-factor in everything that happens.

We start by watching Dracula (Lee) die. The witness to his demise is a merchant named Weller (Roy Kinnear), who goes to the remains of Count Dracula and takes his cape, ring, and brooch that has essentially powdered blood on it. This will all be important eventually, even though the scene is going to shift radically after this.

We are next going to be introduced to our collection of characters. William Hargood (Geoffrey Keen) is a strict and moral man on the surface, and keeps a tight rein on his daughter Alice (Linda Hayden). Alice is in love with Paul Paxton (Anthony Corlan) and her father refuses to let her even see him. Paul’s father Samuel (Peter Sallis) is an associate of William Hargood. He also has a daughter named Lucy (Isla Blair), who is about to be engaged to Jeremy Secker (Martin Jarvis), son of Jonathan Secker (John Carson). Those three men have an odd little thrill seeking club that more or less just drinks a lot and hangs out in brothels.

One night, their revelry is interrupted by Lord Courtley (Ralph Bates), who was disowned by his father when he was caught holding a Black Mass. The men are intrigued by Courtley’s obvious willingness to push boundaries. Courtley suggests a true thrill that will require all three of the men to literally sell their souls to the devil. They agree, and also are asked to put up money to buy what is needed. Remember that stuff from the opening scene? That’s what they need, because Courtley is the servant of Dracula.

So, they go through the ceremony, but all three of the men panic, and instead of completing the ritual, they beat Courtley to death and flee. Nonetheless, Dracula inhabits the body of the dead man and, since the three thrill seekers have killed his servant, he vows revenge. How? Well, by killing the men eventually and by corrupting their children, specifically Alice and Lucy.

As I said at the top, there’s not a great deal of Christopher Lee in this film. How that translates is that when someone needs to die at the behest of Dracula, someone else is going to do it. Dracula hypnotizes Alice and turns Lucy into a vampire, so he has those two to do his nefarious bidding. Generally, the two women do the deed (each kills her own father) while Dracula observes approvingly.

When the film was originally planned, Lee didn’t want to don the cape again, and it was planned to be filmed without Dracula at all. Truthfully, it would have worked that way since he is in it so little. Once Lee was convinced into the role, naturally he needed to be used, but for the small amount that he’s on camera, it would have been virtually the same film to have Courtley wake up as the vampire after he was killed. Sure, Lee was a commanding presence on the screen and he has that gravitas that the role genuinely requires, but filmed without him, it might make a little more sense, and we’d only be out maybe 20 minutes of screen time for Lee.

The story itself is kind of fun, if predictable. The only real question from moment to moment is which person is going to be attacked next. We know that Dracula always dies at the end of the film (it’s a tradition!) so that he can be brought back to unlife at the start of the next film. In this case, though, he’s not brought back until a good halfway through. Instead of getting us to the vampiric goodness, we’re stuck watching scantily clad women dancing around middle-aged guys, which is even less exciting than it sounds.

Taste the Blood of Dracula isn’t bad. It’s not great, though, but I did enjoy it. It either needed to commit fully to Lee or not have him at all. Because he really doesn’t show up until the film is half over, he doesn’t cast the shadow over the film the way it is needed. At that point, he’s kind of an expensive prop more than anything else, and Christopher Lee should be more than that.