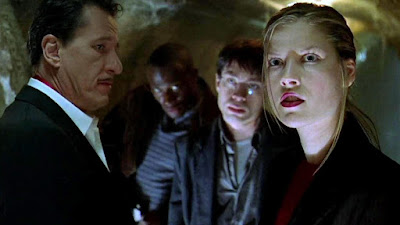 I tend to be leery of remakes. There are plenty of remakes that are good, of course. The John Carpenter version of The Thing, for instance, or The Fly. Even The Maltese Falcon is the third version of that story brought to the screen. However, more often than not, remakes are worse than the original version. I was doubly nervous when it came to the remake of House on Haunted Hill. That trepidation can be summed up in two words: Chris Kattan. I stand by my opinion that no movie featuring Chris Kattan or Rob Schneider can be any good. That this is actually Kattan’s best performance doesn’t say much, but actually does work slightly in the film’s favor.

The basic set up here is kind of the same. We have a rich couple, in this case Steven (Geoffrey Rush) and Evelyn Price (Famke Janssen). As in the original film, these two are married, but just barely in the sense that they actively hate each other, but for some reason are not divorced. It’s a running gag between them that they’d like to kill each other. As an added bonus this time, Steven Price, rather than being randomly rich, runs a group of fear-based amusement parks.

Again, as in the original film, Evelyn’s birthday is fast approaching, and she’s decided to throw her party at the Vannacutt Institute. At the start of the film, we get a little on this place. It was a “hospital” for the criminally insane, but was more or less a torture chamber for Dr. Vannacutt (Jeffrey Combs) and his sadistic staff to perform horrible experiments on the inmates. One day, the inmates revolt and overthrow the place, killing just about everyone. Anyway, Evelyn wants her party there for some reason. Steven rips up her guest list and makes his own, but even this ends up not being the list of guests who are invited.

Our guests arrive and are all promised a cool million from Steven Price if they survive a night in the house, with the added incentive that any survivors will split the cash of those who don’t make it. Those guests, aside from the Prices, are ex-baseball player Eddie Baker (Taye Diggs), alleged studio executive Jennifer Jenzen who is actually her assistant Sara Wolfe (Ali Larter), former celebrity Melissa Margaret Marr (Bridgette Wilson-Sampras), medical doctor Donald Blackburn (Peter Gallagher), and house owner Watson Pritchett (Chris Kattan). So far, same set up, right?

Sadly, this is where the similarities end for the most part. The conceit in the original (spoiler alert!) is that there were no ghosts. The whole thing was an elaborate ruse for the rich guy and his wife to attempt to bump each other off, with one of them coming out on top. In this remake, the house actually is haunted and the ghosts are real. There really is an undead version of Dr. Vannacutt walking around the premises continuing his horrible experiments and suddenly graced with the presence of seven new, live bodies.

I’ll be honest; I made the decision that I would base at least a part of my opinion on whether or not Chris Kattan was horribly killed. I’m not proud of that, but I feel it’s only fair to admit it.

The truth is that House on Haunted Hill isn’t good. Since it’s going to play merry hob with the original story in pretty much every important way beyond the main set up, it loses any nostalgia factor it might have going in. Because of that, it has to rely on a few other potential factors to be any good at all. There are certainly some actors here who have the chops. Geoffrey Rush has won a damn Oscar, after all, but nothing he or anyone else does can help on the acting front. That Chris Kattan (as I said earlier) gives his career performance here says little. That he’s not close to the worst thing on the screen says a lot more.

So how about the effects? Since we’re going to have real spooks here, the effects should be good, right? Well…no, not so much. House on Haunted Hill is one of those films that used those camera trick tropes where someone shakes his or her head really fast and frames are removed so that the head movements are completely unnatural and too fast. In scenes that flash back to Dr. Vannacutt, frames are removed as well to make him look like an old movie missing small pieces. These are genuinely the best effects in the film. When the monster actually shows up at the end, it’s so clearly bad special effects that it brings down a film that wasn’t that high to begin with. I don’t know how they played in 1999. I can only tell you that they don’t play at all today.

So, gore then? There is some, but it’s mostly blood. We get a tasty electrocution scene at one point and a few moments that look like they could be gore but aren’t. The rest is just blood and a severed head (sort of a nod to the original) at one point. One moment that should be filled with gore—the discovery of one of the houseguests dissected and placed on display—is literally bloodless. Even here, it disappoints.

It’s clear what the attempt was here. It’s also pretty clear that it really didn’t work at all. This is a disappointment all the way around. If you want to watch a film with this name, watch the original. It’s cheesy, but it’s also very charming. This remake loses all of what made the original fun and replaces the cheese with weak acting and weaker effects. It’s not worth your time.

Why to watch House on Haunted Hill: Mild gore?
Why not to watch: Everything that was fun from the original is gone.