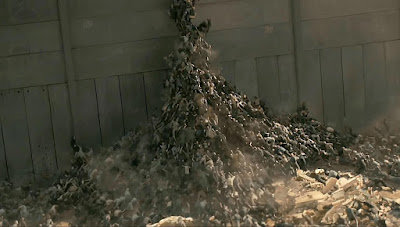 I didn’t really want to watch World War Z for a number of reasons. The primary one is that I’ve read the book, and Max Brooks’s episodic novel is absolutely the best piece of zombie literature that has been produced, at least to my knowledge. It’s smart, it covers the zombie plague from several dozen perspectives, it offers real, human heroes and villains, and manages to be politically incisive as well as entertaining. The minute I realized that the movie was going to be an action movie with zombies, I threw my hands up in disgust. That’s not what Max Brooks wrote.

What Brooks wrote—and I can’t recommend the book enough—is a survivors’ oral history. The book posits that the zombie war is over and has been more or less won, humanity having started pushing back against the undead and reclaiming territory. The book is a series of interviews with survivors at all levels: government officials, children, doctors, soldiers. Each person has a particular perspective on what happened and survived in his or her own way. The story goes from the opening moments of the plague, one of the first victims in rural China to the clearing of the American continent, the rescue of pockets of survivors, and the continued cleansing of the planet from the undead menace.

Had World War Z been done that way, a series of documentary-style interviews rather than an action movie, I can say two things, one of which is clearly true and one of which I think is true. The first is that it wouldn’t have made any money. The second is that it would have been a better and more important film. It would have had depth and heart and soul, three things the actual movie lacks. In fact, aside from the name and the inclusion of zombies, there is very little here to connect to the source material other than a few isolated details.

Rather than following multiple people, we’ll instead be following Gerry Lane (Brad Pitt), a former U.N. official. The zombie plague, which has been slowly building based on some news reports that we hear suddenly breaks out in a big way, causing mass chaos, destruction, and millions of people suddenly becoming undead. Gerry and his family are out at the time and caught in traffic. When the plague starts sweeping through the streets, they are forced to run. Thanks to his U.N. contacts, Gerry gets hold of Thierry Umutoni (Fana Mokoena), a high-level U.N. official, who agrees to rescue the family via helicopter. A close call or two later, and the Lanes are aboard a ship. Gerry is recruited, being told that if he doesn’t more or less resume his old position and start investigating the plague, and his family will be returned to Philadelphia to almost certainly be killed.

From here, we go on a world tour, with Gerry arriving at military bases only to have them consistently overrun. He goes to Israel to meet with Jurgen Warmbrunn (Ludi Boeken), head of Mossad, who ordered Israel walled off just as the plague was starting. Of course, the zombies get in here, too, climbing over the walls and attacking the people below. Gerry leaves once again to find a W.H.O. facility in Cardiff, bringing along Israeli soldier Segen (Daniella Kertesz), whose hand he lopped off when she was bitten, saving her from infection. Of course the plague breaks out on the plane as well, leaving Gerry and Segen the only survivors. They make it to the facility only to discover that half of it is infested as well.

See, Gerry is working on a hypothesis that the zombies won’t attack people who are already ill. He observed several cases where they simply avoided people, and he guesses that those people are diseased, and thus not a good carrier for the plague. His goal is to see if he (or someone else) injected with some deadly pathogen will be avoided by the living dead.

And that’s where I did pretty much throw up my hands and wonder what the hell I was doing still watching this movie. This has absolutely nothing to do with the source material at all. It also doesn’t make any damn sense. The plague kills its victims, after all. Who cares if they have beri-beri or rickets? They’re going to be dead anyway.

World War Z attempts to bring in some ideas from the book. Israel is walled off in the book, for instance, and does take in survivors from surrounding nations, but the country isn’t overrun with zombie swarms climbing over the walls. The zombies in the book aren’t capable of that. There is a strong desire to bring in as much of the world as possible in a two-hour movie, but of course a great deal is left out. So much of the backstory is missing here as are all of the personalities that make the book what it is.

I give full credit to the filmmakers for not whitewashing anything. The Israeli characters, for instance, are played by Israeli actors. The people manning the Cardiff W.H.O. facility are international, as are the U.N. facilities. There isn’t any British-for-African going on here, and I appreciate the hell out of that.

But it’s a disappointment. It would be a decent but flawed zombie movie in any event, but when it’s given the name of a genuinely good book and attempts to capitalize poorly on someone else’s inventiveness, I don’t understand the point. Give this a different name, and my opinion rises a touch. Expectations killed it.

Why to watch World War Z: No whitewashing.
Why not to watch: It has as much in common with its source material as I do.