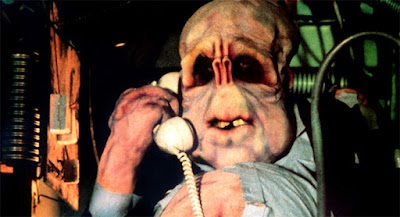 It can be fun to see an actor’s early films, especially for actors who eventually become very prominent and start out in low/no-budget films. It’s even more fun when those movies are cheap horror movies. The same can be said of directors. A director’s early films often show interesting promise. Sometimes you get something shockingly good, like Blood Simple from the Coens or Play Misty for Me from Clint Eastwood. And sometimes, you get something completely crazy, like John Carpenter’s Dark Star or Peter Jackson’s Bad Taste, the subject of today’s review.

Bad Taste was written by Jackson and filmed on weekends over a four year period while Jackson was working on a newspaper. The budget appears to be “whatever Jackson found in the couch cushions.” The cast consists of Jackson himself and some friends, who also doubled as the crew. Had Jackson gone on to do nothing, Bad Taste would be a weird little footnote that no one ever saw. However, since Jackson went on to do the Lord of the Rings movies, this early curiosity has become something of a cult favorite.

The basic story is, as much horror seems to be, pretty simple. A team called the Astro Investigation and Defense Service (or AIDS) is investigating the disappearance of all of the people in a small New Zealand town. The team consists of four members. These are Barry (Pete O’Herne), the guy with the facial hair; Ozzy (Terry Potter), the guy with the ‘80s hairdo; Frank (Mike Minett), the one with the cigar; and Derek (a beardless Peter Jackson), the dorky one with the glasses. As the film starts, Barry and Derek are investigating the town while Ozzy and Frank are on their way in.

The investigation turns up an alien infiltration. Further investigation reveals that the aliens are attempting to test-market a new fast food product: humans. It’s up to the team to defeat the aliens and prevent them from getting their new snack food back to their interplanetary restaurant, or the human race will soon be deep fried and served with a side of onion rings.

What’s going to follow from this is a lot of strange behavior, the kind that only happens in comedy films. As often seems to be the case with comedy, there’s a lot of pratfalls and physical comedy, particularly with the Derek character. The truth is that it’s ultimately not very funny. The real humor here comes from other places. For instance, near the end of the film, the AIDS crew, along with a charity collector named Giles (Craig Smith) have a massive gun battle with the aliens. The aliens shoot and shoot and always miss while the humans seem to hit everything they shoot at without a problem At one point, one of them takes a massive amount of fire from a tree, but emerges unscathed. He fires a burst into the tree, and about half a dozen aliens fall out dead.

There’s also a lot of gore here, and it’s of the comic variety. It’s something that Jackson would build on for a film like Dead Alive. The effects are purely amateur hour, but they’re kind of expected to be. Part of the charm of Bad Taste is that the effects are so low rent and amateur.

The effects aren't the only thing that are amateur here. The acting is universally unprofessional, mainly because no one in the film was a professional actor. Reactions are exaggerated throughout, and while that’s often played for comedy, it also has a tendency to fall flat.

Honestly, there’s not really a lot to say about Bad Taste. There are inklings here of what Peter Jackson would become as a director, but there are really just inklings. Bad Taste was a film that he made to prove that he could do it, something that eventually propelled him into Dead Alive, Beautiful Creatures, The Frighteners, and the Lord of the Rings trilogy. In a sense, Bad Taste is a step above a student film, but that’s what it’s supposed to be. If Jackson had not amounted to anything, no one would know much about it.

It’s a curiosity, and really, that might be enough. It’s disgusting and while not all of the humor works, enough of it does.

Why to watch Bad Taste: Even in something this cheap, you can see the beginnings of Jackson as a director.
Why not to watch: No budget for the movie, not much talent in the actors.