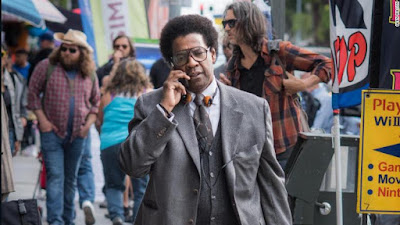 I’ve said a number of times on this blog how much I enjoy it when an established actor plays significantly against type. That’s at least a big part of the appeal of Roman J. Israel, Esq. for me, even if this isn’t that big of a difference for many of the acclaimed roles of Denzel Washington of the past few years. He’s a straight bastard in Fences and a drunk and an addict in Flight, so in that respect, where this character goes runs at least in part in the same circles in this film. It is different in a lot of ways, though, and it’s different in that way that Oscar tends to like a great deal.

Denzel Washington plays our title character here, an aging lawyer who works for a firm that consists of himself, another lawyer, and a receptionist. Roman, who makes about $500 per week, spends his days essentially writing briefs and doing a great deal of the legwork for cases, frequently dealing with their defendants’ civil rights. The other lawyer is William Jackson, and it is he who takes the cases to trial. In moments of his spare time, Roman works on a massive brief that has occupied him for years. This brief is in regard to a class action suit about the complete overhaul of the plea bargaining system.

When the movie begins, Roman’s boss/partner has suffered a heart attack, forcing Roman to go to the courtroom to deal with their clients. It soon becomes evident that being in a courtroom is not Roman’s forte. It slowly becomes apparent that this is because Roman is a high-functioning autistic. Honestly, that’s never actually said in the film, but that conclusion explains everything about the character. He doesn’t do well with other people. He’s not good in public situations. He doesn’t seem to understand nuance or emotion that well, and tends to take everything literally. It makes him a very good behind-the-scenes lawyer, but a terrible one in front of a jury.

It’s soon evident that William Jackson is not going to survive the effects of the heart attack, and it is also soon evident that the firm is broke because of all of their pro bono work. Jackson’s niece (Amanda Warren) gives the task of liquidating the firm and handling the various clients to George Pierce (Colin Farrell), a former student and admirer of Jackson’s. Recognizing the unique talent that Roman has, he offers him a job, which Roman initially refuses. Since much of Roman’s work has been in the area of civil rights, he attempts to get a job with a local activist group headed by Maya Alston (Carmen Ejogo). The interview goes badly, but Maya is intrigued by Roman’s unique perspective.

The upshot of all of this is that eventually, Roman is hired by George and put in front of actual clients. He doesn’t handle this that well initially, clashing with other members of the firm. One of his clients, a young man accused of first-degree murder (DeRon Horton) attempts to roll on the wanted criminal who actually pulled the trigger. When Roman fails to arrange a suitable plea bargain, the boy is killed in prison. Frustrated by the way his life has turned, Roman uses the information he received from his client to call in an anonymous tip about the location of the real killer and collects a $100,000 reward. This, incidentally, is illegal.

The end of the second act deals with the initial fallout of Roman’s decision, which include him urning his back on his life’s work and enjoying a little bit of the money that he gets from the reward. The third act deals with the rest of the consequences, and serves as an interesting moral tale. Much of this third act consists of George realizing the value of Roman’s old work and passion and moving his firm to change their fee structure, provide more personal service, and even take on pro bono work. It’s as if the film wants to say that if Roman had merely held on for a few more days, his years of toil would have been rewarded.

And so, as often happens with a movie like this one, Roman J. Israel, Esq. has put me in a difficult position in terms of my opinion. It’s a hell of a good performance from Washington. In so many of his roles, regardless of the person he is playing, Washington is a man in charge, a man used to dealing with power and wielding it. In this film, he has a much different sort of power, and the man wielding it does so with much discomfort. It’s a fascinating thing to see him get into this character’s headspace. I’m also surprised at the decent performance from Colin Farrell, an actor who I often find unappealing at best.

And yet I hate this story a great deal. I don’t like where it goes and I’m not sure I entirely buy the decisions the characters make. It seems to be entirely plot-driven rather than character driven. Things happen because that’s the story that is being told rather than happening realistically and organically. That’s an issue.

See it for Denzel, and don’t worry about needing to see it again.

Why to watch Roman J. Israel, Esq.: This is a very different role for Denzel Washington.
Why not to watch: I don’t know how much I really buy the plot.