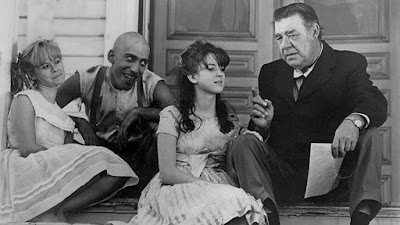 What’s most interesting to me about Spider Baby isn’t what happens on the screen, the presence of Lon Chaney Jr. in one of his last appearances, or the presence of a very young (and beardless) Sid Haig, but the obvious influence this weird little film had on horror that followed. You can draw a straight line between this and the original Texas Chainsaw Massacre within the first couple of minutes of the start. You can also connect it to The Hills Have Eyes, and not just because the young Sid Haig looks a little bit like Michael Berryman.

We start with a sort of introduction of a smug guy named Peter Howe (Quinn K. Redeker) telling us about something called Merrye Syndrome. According to him, Merrye Syndrome occurs only in the Merrye family. Its sufferers, starting in late childhood, begin to regress down the evolutionary ladder, becoming less human and more animal-like as they get older. As it happens, Peter is a distant cousin and stands to inherit the Merrye family fortune.

So, we’re introduced to the surviving Merrye family. These are Virginia (Jill Banner), Elizabeth (Beverly Washburn), and Ralph (Sid Haig). All three are post-adolescent, meaning that they’ve started to suffer from Merrye Syndrome, with Ralph, who moves through the house in a dumbwaiter and communicates exclusively with leers and grunts, the furthest along. We also learn eventually that a few members of the older generation, now completely devolved, live in the family basement. We get our first taste of Merrye Syndrome when Virginia kills a delivery driver with a pair of butcher knives.

Overlooking the Merrye children is Bruno (Lon Chaney Jr.), the family servant and chauffeur. Bruno does his best to keep the three younger Merryes in check and to clean up after their mess. So what we’ve got is a crazy family bent on killing and other people who stand to inherit. If you think this means that those other people are going to show up and all sorts of crazy shit and murder is going to happen, well, you’ve seen a movie like this before.

Our four guests who will soon be tormented by the insane Merrye clan are Peter from the introduction, his sister Emily (Carol Ohmart), a lawyer named Schlocker (Karl Schanzer), and his assistant Ann (Mary Mitchel). Mayhem, which includes Ralph’s sexual assault on Emily and a dinner of garden weeds and roast house cat are soon to follow.

For all of its low-rent origins and prurient intent, Spider Baby does a lot of things right. First and foremost is the presence of Lon Chaney Jr. Chaney’s career was filled with monstrous roles in terrible movies, so it’s easy to forget that he could have real talent as an actor. Chaney, as demonstrated in The Wolf Man had real qualities as an actor. He was capable of being incredibly sympathetic, almost reassuring, and that’s the role he’s been placed in for Spider Baby. He’s genuinely good in this. It’s also worth noting that Sid Haig is great in his scenery-chewing role as Ralph.

Another good point is the casting of both Beverly Washburn and Jill Banner. Neither one were great actresses in this, but they possess a quality that is essential to making Spider Baby work at all. They are completely psychotic, of course, but also possess a sort of child-like innocence. Sure, they kill people with butcher knives, but they also don’t have the mental capacity to understand what they’ve done. That they were both young and pretty only adds to this. It makes it believable that the other characters in the film (especially Peter) wouldn’t realize just how horrifying they are until it’s too late or almost too late.

Truthfully, though, Spider Baby is not a good movie. It’s cheap and aside from Chaney and Haig, the acting is as low-rent as the film’s budget. This was made specifically to shocking and weird, not to be a great piece of cinematic art. And that’s okay. It’s a great example of the “crazy, murderous family” subgenre of horror films, and one that is still making its influence felt today. And for that, you kind of have to love it a little bit.

Why to watch Spider Baby: You can see the influence it had on horror that followed.
Why not to watch: It’s almost unexplainable.