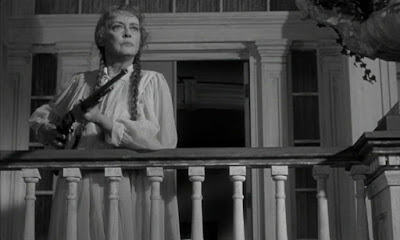 When I started this blog, I didn’t really consider myself a fan of Bette Davis, mainly because I didn’t know a great deal of her work. Now, having seen a ton of her films, I fully understand why she had the reputation she did. Davis was capable of playing just about anything, but she was at her best and her most Bette Davis-y when she had a good, bitchy role to sink her teeth into. Hush…Hush, Sweet Charlotte gives her the chance to bitch things up and also deal with some potential insanity. It’s a great combination for her.

We start in 1927, when young Charlotte Hollis (Bette Davis) is being romanced by a married man named John Mayhew (Bruce Dern). Charlotte’s father Sam (Victor Buono) understands precisely what this sort of scandal could mean to his societal standing in 1920s Louisiana, and demands that John call off his plans to run away with Charlotte. John agrees, and at a party at the Hollis house, he does so. Shortly thereafter, John is attacked by an unseen assailant, who chops off his hand and head with a meat cleaver.

The townspeople naturally suspect that Charlotte is the guilty party, especially when she shows up to the party drenched in blood. No charges are ever pressed, though, and when her father dies the next year, Charlotte becomes a recluse in her giant, antebellum house, seeing virtually no one but her servant Velma (Agnes Moorehead). We’ve moved decades into the future, roughly present-day for when the film was made (mid-1960s) to find that Charlotte is still a recluse in her house, but will soon be forced to move. The city is putting up a bridge through the middle of where her house now sits, and Charlotte has done everything she can to stay put and not let them kick her off her property, including taking pot shots with a rifle at the building crew chief (George Kennedy).

Seeking help, Charlotte has reached out to her last remaining relative, her cousin Miriam (Olivia de Havilland), who lived at the house when the murders occurred but has since moved to New York. Miriam arrives and almost immediately re-establishes her former relationship with former beau Drew Bayliss (Joseph Cotten), now the town doctor. Miriam discovers that Velma is pretty feisty and defensive of Charlotte and that Charlotte herself seems to be sometimes detached from reality. She appears to have visions of her dead lover and of her father.

The final thing to throw into the mix here is Harry Willis (Cecil Kellaway), an insurance investigator who has been privately interested in the Hollis case for nearly four decades. With the Hollis house about to be destroyed, he’s arrived to finally put his curiosity to rest, hoping to find time to interview Charlotte as well as John Mayhew’s widow Jewel (Mary Astor, in her final role before retirement).

That’s a lot, and I’ve really only touched on the surface of what is going on in Hush…Hush, Sweet Charlotte. The fact that I’ve classified this as a film noir should indicate that there’s a great deal more going on under the surface. One of the joys of the movie is seeing all of the different puzzle pieces fall into place.

The main emphasis of the film seems to be the creation of an atmosphere where things that are unexplained continue to happen. We hear, for instance, a song that John Mayhew wrote for Charlotte being played on the harpsichord, and it’s not clear until the very end whether or not that is simply in Charlotte’s head or if it’s someone actually playing the instrument. In fact, we’re not really sure if Charlotte herself is actually losing her mind (or already lost it) or if she is simply playing the Hamlet card and faking it for some other, ulterior motive. In the main, the film is really successful at creating this atmosphere, and while the entire story of what is actually happening is eventually expositioned for us at the end, things really aren’t clear until that point.

Is there an issue here? Well, there usually is, and with Hush…Hush, Sweet Charlotte, that issue is the vast amount of screaming. Bette Davis plays this role turned up to 11 all the time, and while that works sometimes, it doesn’t always work and soon because oppressive and screechy. There is some requirement for her to be on edge all the time, but she’s never not on edge the whole time.

Still, it’s a hell of a fine movie all the way around. I’d say that Agnes Moorehead is the unsung hero of this film except that she’s the only person in the cast who managed an Oscar nomination, and she deserved every bit of it. But beyond that, the film is so beautifully cast all the way through. Having Olivia de Havilland and Joseph Cotten in prominent roles makes the film that much better, and even small roles like the road crew foreman and John Mayhew filled with good talent brings the whole thing up a notch.

It’s also worth noting how cleverly this was filmed. I suspect that Davis was used in the early scenes as Charlotte, a fact that should have presented a potential problem. Finding a young actress who looked enough like Davis to play a younger version of her would be a tremendous feat since Davis was such a unique and unique-looking performer. Instead, in those early scenes, we never see Charlotte’s face. Is it Davis? Is it a stand-in? It doesn’t matter because she’s always filmed from the back or with her face in deep shadows. It’s a smart move and allows us to easily conflate the younger and modern versions of the character as the same person.

This is a hard film not to like. It’s not perfect by any stretch, but it’s a lot of crazy fun.

Why to watch Hush…Hush, Sweet Charlotte: Southern Gothic noir.
Why not to watch: Lots of screaming.