Ten Days of Terror!: The Craft 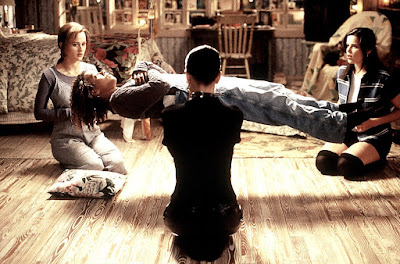 I’m not sure why I like The Craft as much as I do. Some of it is that it seems like the greatest culmination of the 1990s in a single film. It also has a surprisingly entertaining soundtrack that is also the most ‘90s soundtrack imaginable. I like the effects that are used, and I like the way the story builds. I also really like Fairuza Balk and I wonder why her career didn’t build off both this movie and American History X. For whatever reason, I like The Craft a lot more than it deserves to be liked.

I’m going to make the plot rundown quick here because I really want to try to figure out why I like this movie as much as I do. Sarah Bailey (Robin Tunney) and her family move from San Francisco to Los Angeles. Enrolled in a Catholic high school, Sarah soon befriends a trio of girls who she soon discovers are the school’s weird triad. Bonnie (Neve Campbell), Rochelle (Rachel True), and Nancy (Fairuza Balk) are into the occult, sometimes popping down to a local store run by Lirio (Assumpta Serna) and shoplifting a few items to play around with magic. When Sarah, who appears to have some natural gift at witchcraft arrives, the can complete something like a coven.

At first, it’s all fun and games for the four. They start invoking magic to get what they want. Sarah, who is attracted to a student named Chris (Skeet Ulrich) and is the victim of rumors by him, wants him to be attracted to her. Bonnie, who has burn scars along her back, wants them to disappear. Rochelle would like to get even with Laura (Christine Taylor), a racist bully she has to deal with at school. As for Nancy, she wants out of the trailer she lives in with her mother and wants real power in the world.

Of course, the power turns out to be real, and for everyone but Sarah, that power proves to be intoxicating and addictive. It’s not too long before they start using that power in dangerous and unhealthy ways. When a death or two happens and Sarah starts to balk at continuing to use magic for what she sees as evil ends, her three friends and coven-mates turn on her, leading to an ultimate confrontation at the end of the film where Sarah has to tap into what she sees as the true magic available to her and use it to defend herself.

The Craft is sort of like a middle ground between Heathers and Mean Girls. It definitely takes a lot of its vibe from the earlier film, with the high school weirdos taking out their revenge and frustration on the beautiful people. Of course, it also throws magic into the mix, which lends it a much different quality than the funny and edgy Heathers. There is a menace underlying what happens in The Craft, which is why I don’t at all have a problem labeling it as a horror movie. This isn’t a group of girls who start down a dangerous path innocently. All of them quickly become aware that they are dealing with extremely powerful forces.

One of the main things that makes the film work is exactly that—these girls aren’t innocents who get sucked into something that spins out of their control. All four of them start walking down this path with their eyes open, knowing exactly what might be at stake in terms of what they are doing. They see that the powers they are starting to wield have real-world consequences and, at least for three of them, that reality becomes so powerful that they continue to push as hard as they can, knowing that there could be an inevitable backlash. The fact that they know this and continue to push only adds to the believability of the characters despite the presence of real magic in the film. Bonnie, Rochelle, and Nancy are surrounded by that sort of presumed invulnerability of youth, and this is handled really well.

Robin Tunney is perfectly fine as the main character, but anyone who has seen The Craft knows that the real star here is Fairuza Balk, who is an almost perfect physical representation of what everyone thinks of when they think of a Goth-ed out high school girl. Balk’s turn as Nancy is a truly great psychotic performance. She’s appealing specifically because she is so crazy and because she does it so well. While Nancy may be crazy (okay, is crazy), this role made Balk the default fantasy girlfriend for every nerd boy in high school in the 1990s.

It’s also worth mentioning the special effects. Not all of them are as seamless today as they were 20 years ago, but some of them are still pretty good. The film does devolve into a special effects extravaganza toward the end, culminating in a lot of technical shots in the final 20 minutes or so. But that’s okay. They’re great for the time they are in, and some of them are pretty inventive.

I like The Craft a lot, and while I know that I probably like it more than I should, I also kind of wonder why it isn’t talked about more as an important film for its era and genre.

Why to watch The Craft: There’s something about this movie that is endlessly appealing; at least 50% of that is Fairuza Balk.
Why not to watch: Like Heathers, it doesn’t go far enough.