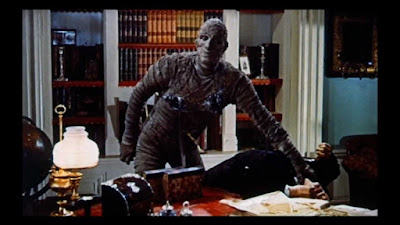 When Hammer Studios started to remake the classic Universal monster movies, it may have ben a risk, but they did them right. One of the big benefits was that they got Christopher Lee and Peter Cushing to act in them. That cures a lot of ills. They also seemed to go all out on presenting something that looked appropriately Victorian in terms of the sets and costumes. It’s no surprise that they eventually got around to The Mummy. It is, after all, a classic love story in its own way.

We start at a dig in Egypt where John Banning (Peter Cushing) has broken his leg, but has refused to return to the base camp to get treatment. He, his father Stephen (Felix Aylmer) and his uncle Joseph Whemple (Raymond Huntley), are just about to break into the tomb of Princess Ananka. Ananka was dedicated to the priesthood of Karnak, and there are naturally some significant warnings against breaking into her tomb. In fact, those warnings are delivered to Stephen and Joseph by Mehemet Bey (George Pastell), a warning that is ignored.

The pair break into the crypt (John is still nursing his broken leg) and discover the sarcophagus of Ananka. Joseph goes to tell John the good news, but when he returns, Stephen is catatonic. Three years later, we’re back in England. John has a permanent limp and is married to Isobel (Yvonne Furneaux). His father has just awoken from his catatonic state and has sent for his son. He reveals to him that he found and read from the Scroll of Life an Ananka’s tomb and it caused a mummy there to come back to life.

Sure, no one believes him, but this is a mummy movie, which means that Stephen is telling the truth. Mehemet Bey has arrived in England as well, bringing with him the mummy of Kharis (Christopher Lee). Mehemet’s goal is vengeance on the three men who violated the tomb of Ananka. This is despite the fact that John never entered the tomb himself.

And so, vengeance happens. Since John is our hero, he’s going to be the third victim of the mummy, and he’s probably going to live. Also, because this is a mummy movie, we get a flashback into how Kharis became what he is. As the forbidden lover of Ananka, he tried to resurrect her when she died. He was punished by having his tongue cut out and was walled into the tomb to serve as her living dead protector for all time. This is essentially why Mehemet Bey has the ability to send him after potential victims. Also, because this is in some respect a love story, it naturally follows that Isobel Banning is a dead ringer (no pun intended) for Ananka, which means she might have some ability to control him herself.

The Hammer horror movies were at their best plucking these strings of the old Universal films, here no less than anywhere else. The sets and costumes are surprisingly sumptuous and make the entire thing work as well as it does. Well, that and the casting. It’s very difficult to go wrong when your monster is played by Christopher Lee and the hero is played by a young(-ish) Peter Cushing.

The most surprising thing I found about The Mummy is how the Egyptian culture is handled. It would be easy and almost expected for this to be incredibly patronizing to the Egyptians and the worship of the ancient gods. Instead, we’re given a very impassioned and surprisingly reasonable speech by Mehemet Bey about the cultural appropriation of the mummies and the tombs by the British. Instead of respecting the rites and religious practices of the ancient people, Bey claims, the English are disrespecting, something little better than scavengers and thieves. John’s response is that without archaeology, there would be no known history of these people and that the study is important for that respect. In short, they both make legitimate points. It’s surprising that Bey is given that reasonable and legitimate a platform for his revenge.

The truth is that the film plays out exactly like you think it’s going to. We get some appearances of the mummy, who crashes through windows and French doors to get at his victims. It all seems terribly inefficient, though. For instance, the mummy goes hunting John’s uncle Joseph and finds him, strangles him (one-handed!) and walks away despite the fact that the man who will be his third victim is literally standing 10 feet away and shooting at him with a pistol.

Still, it’s worth it for the cast and the gorgeous sets. It’s worth it even though Lee is unrecognizable as the mummy when he’s in the full costume. It’s worth it because it’s Hammer from the late 1950s and you deserve some joy in your life.

Why to watch The Mummy (1959): Peter Cushing in his Hammer prime.
Why not to watch: No good reason, save that it’s not the Karloff original.