When you watch films based on the real world, you can’t help but pick something up. For instance, I never knew that there were thousands of Jews living in Ethiopia. These are not displaced Israelis but Africans who are traditionally Jewish. Many of these Jews were moved out of Ethiopia and relocated to Israel by Israel. They were forced to walk, and many died along the way—bandits, disease, starvation, and the like killed them off. 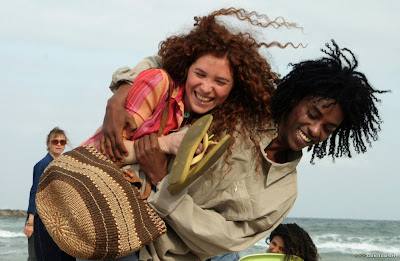 Va, Vis et Deviens (Go, See and Become or more commonly Live and Become) is the story of one boy who was rescued. The boy, however, has a terrible secret. He is not Jewish, but the son of a Christian woman who is one who, because of her religion, cannot go to Israel. She gives her son to a Jewish woman who had lost hers. The boy is renamed Shlomo (Moshe Agazai as a boy, Moshe Abebe as a teen and Sirak M. Sabahat as an adult), learns a false family history, and is brought to Israel and safety. When his mother sends him away, she tells him to live and become, and to never return to Ethiopia.

In Israel, Shlomo has a difficult time adjusting. His adoptive mother dies of disease almost immediately, and the now re-orphaned Shlomo is placed in a school. Here he acts out with violence and attempts to run away. Lost in dealing with him, the school adopts him out to a couple originally from France. Now Yael (Yael Abecassis) and Yoram (Roschdy Zem) are his new parents, and he becomes part of their family, attempting to fit in with their son and daughter.

Of course, it’s not that easy. There is a tremendous amount of racism, and because Judaism is passed through the mother’s line and the Ethiopian Jews are said to be descended from the non-Jewish Sheba, there is also a movement to “convert” them to true Judaism. The more blatant racism affects Shlomo more, as parents at his new school believe he will reduce the overall scores of the students there and also worry that he is a disease carrier. His parents stand with him, particularly his mother, Yael. Around this time, Shlomo also confesses to a fellow Ethiopian, Qes Amhra (Yitzhak Edgar) that his mother is still alive in Ethiopia. Qes, who can write Amharic, agrees to write letters for Shlomo.

The racism doesn’t go away. A young girl named Sarah (Roni Hadar) becomes infatuated with Shlomo, but her father prevents her from seeing him. Over time, we learn that they continue to see each other surreptitiously, but that he is constantly aware that seeing him, even potentially marrying him, will have severe consequences for her. It will cause her family to disown her, and for the rest of the Jewish world, she will become viewed as black. And, of course, there is the continuing problem of Shlomo’s dark secret—that he truly isn’t Jewish, and thus has no real right to be in Israel in the first place.

This is a fascinating story, and a difficult one because it tries to tell several stories at once. A large part of this story is about the racism that exists both within this story and within the world. Israel isn’t immune from this, as Shlomo’s story attests. He, in fact, is doubly an unwanted minority, both Ethiopian and a Christian. While the first makes him a second-class citizen, the second makes him liable to be sent back to the hell of Ethiopia and a refugee camp.

It is also a story of acceptance within the family. We learn about an hour in that Shlomo’s adoptive father continues to have a difficult time with his adoptive son, much as Sarah’s father refuses to accept him despite his attempting (and succeeding) to prove precisely how Jewish he can be. When Shlomo decides to study medicine abroad rather than serve in the Israeli military, things come to a head between him and his father. Shlomo’s secret becomes known to several people during the course of the film, and their reactions to him show the other side of this idea of acceptance.

The genius of the film is that it manages to juggle all of these themes in a single story that takes place over a good amount of time. Despite the number of issues presented here, it’s an easy story to follow, and similarly an easy story in which to become enmeshed. These are real characters, not caricatures produced for a film. This, more than anything is precisely what makes the film work despite its complexity.

This is a beautiful and moving film, and one I am glad to have seen. This is not a film I’d have normally chosen, so I am pleased it was chosen for me.

Why to watch Va, Vis et Deviens: It's a story you didn't know needed to be told.
Why not to watch: It's perhaps longer than it needs to be.