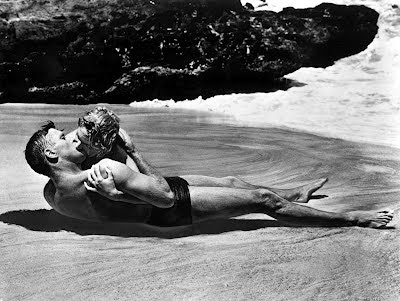 There’s a reason that many films involving the military paint a fairly positive picture. This is particularly true of older films. A positive portrayal of the military means military cooperation—actual soldiers to work as extras, equipment, legitimate uniforms, all the perks. Go off script and paint the military as something less than stellar back in the day, you were on your own. A film like From Here to Eternity? There are a lot of military sins to make up for with this one.

The story takes place in the months leading up to the Japanese surprise attack on Pearl Harbor. We start with Private Robert E. Lee “Prew” Prewitt (Montgomery Clift) being reassigned to the military base at Pearl Harbor. Prewitt is a good soldier and also the top man in the bugle corps, but asked for a transfer when he was replaced as the top bugler by the friend of his commanding officer. Prewitt is also an accomplished boxer, and this will be important as we move along. When he arrives at the base, he encounters his old friend Maggio (Frank Sinatra) and also meets Sergeant Milt Warden (Burt Lancaster), a by-the-book sergeant who essentially runs the company.

We also meet the company commander, Captain Dana Holmes (Philip Ober). Holmes doesn’t do much work, leaving most of his paperwork and decisions to Warden, who frequently forges the Captain’s signature. Holmes is concerned with two things—the regimental boxing title and cheating on his wife, Karen (Deborah Kerr). Holmes is convinced that if his boxing team wins the next title he’ll get a promotion, which is why he arranged for Prewitt to come to his company. Prewitt, though, isn’t interested. He’s given up fighting for personal reasons. What follows, then, is Prewitt being beaten down in every possible way by the sergeants who box, hoping to eventually wear him down and get him to agree to fight.

Meanwhile, we have a couple of romances going on. The neglected Karen Holmes, who has a reputation for running around with non-commissioned officers, takes up with Sergeant Warden, who is immediately taken with her. Also, Prewitt falls for Lorene (Donna Reed), whose real name is Alma. She works at a “social club” that is a step or two away from a brothel (and is a brothel in the original novel). However, Prewitt is unable to visit her often, as he is regularly denied weekend passes by the sergeants who are trying to force him back into the ring.

We also encounter Sergeant “Fatso” Judson (Ernest Borgnine), a heavy and a lout who mixes things up with Maggio. Judson runs the stockade, and when Maggio is denied a pass and goes AWOL, Judson becomes the tormentor of Maggio. It’s around this time that everything begins to fall apart for everyone. Karen Holmes asks Warden to buck for a commission so she can leave her husband and marry him. Prewitt stands firm against returning to boxing, but is so heavily put upon that he comes close to cracking. In the stockade, Maggio endures vicious beatings from the sadistic Judson. When Maggio finally breaks out, everything starts to collapse. It’s almost an afterthought when the Japanese attack Pearl Harbor.

From Here to Eternity garnered a shit-ton of Oscar nods and won a good double-handful of them. I’m going to suggest at this point that I think they were deserved. This is a pretty ballsy film in a lot of ways. In 1953, we were fewer than ten years removed from World War II, a war we won and one that is almost universally accepted as a war we should have been in and had every right to be in. This film is a dressing-down of our military throughout. But it’s also a humanizing of the military. These are real men with real lives, desires, and problems. Of all of them, it is perhaps Maggio who is the least believable. He gets into trouble by walking off a guard post simply because he didn’t get to use his weekend pass, and then breaks out of the stockade. Both events are certainly plausible, but are the most extreme behaviors of the main cast.

Other than that, and keeping in mind that Maggio’s actions are within the realm of believability, the rest of the cast acts precisely in ways we’d expect real people to act. Prewitt is adamant in his desire to give up boxing and is just stubborn enough to not give in. The other sergeants bullying him are the same sorts of bullies we witness in other films—and are notably the same sorts of bullies we see in school and business in the real world. Milt Warden is perfectly conflicted. He’s a top-notch sergeant and cares deeply about his men, even going to the point of getting himself court-martialed by protecting Prewitt, but is also willing to risk the same court-martial and imprisonment for having an affair with Holmes’s wife. It’s all believable, but it seems so shocking and surprising coming in military uniforms in 1953.

It’s also worth mentioning Deborah Kerr’s portrayal of Karen Holmes. Kerr had a reputation of playing ladies, refined women. This role was a huge switch for her, and a great one. I love her in this role. She plays Karen Holmes with a combination of sexuality, rage, and pain that is palpable and visible in every movement and in every line. Karen Holmes is a woman in pain at the world and wanting nothing more than to get back at everyone. Milt Warden is the first tenderness she ever finds, but she never quite gives herself over to trusting it completely.

Suffice to say that this is not the movie I expected. The actual attack on Pearl Harbor takes only a few minutes and is more concerned with what happens to our main cast than with what happens to the rest of the people on the base. There’s almost no war in this war film. Or, rather, there’s not much shooting war. There’s a great deal of cold war going on here between the various personalities. It’s a great one, and a classic for a reason.

Why to watch From Here to Eternity: True drama in military uniforms.
Why not to watch: If you expect a war film, you’re not getting it here.