All the Colors of the Rainbow 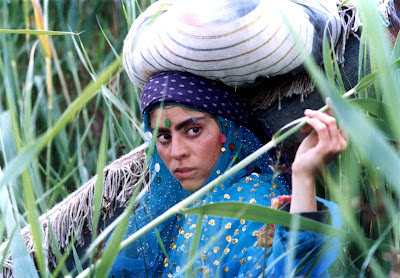 I don’t often watch the same film twice in a row, but there are times when I find it necessary. With Mohsen Makhmalbaf’s Gabbeh, it was necessary, but that’s not a bad thing. I was willing to watch a second time because even though I didn’t completely understand it the first time (or, in the interest of full disclosure, the second time), I enjoyed it very much. Gabbeh is one of the most visually rich films I have ever seen, even if its meaning is pretty opaque. I think there’s also some truth to the idea that I didn’t understand it was well as I could have because I’m not immersed in Iranian film, or Persian myself.

The film is a mixture of fairy tale and magical realism, and it works on many levels at the same time. We start with an old couple (Hossein and Rogheih Moharami) who are walking to a pool of water with the intent of cleaning their rug, called a gabbeh. Before they begin cleaning it, a young woman appears on the rug and claims her name is Gabbeh (Shaghayeh Djodat). And here’s where the multiple levels kick in. She might be the spirit of the rug, since gabbehs traditionally tell stories, and specifically tell stories of the weaver. She might also be the old woman in a younger form. She might also be the sort of idealized version of a woman, or the old woman.

Anyway, she tells her story, which is consistently mixed in with the present. She wishes to marry her suitor, a horseman, but is consistently refused the right by her father. We frequently cut back to the old couple who sometimes take the roles of her father, her suitor, her uncle, her mother, and her, essentially playacting the story along with her. The uncle (Abbas Sayah) is a key figure in the film. In part, this is because initially Gabbeh cannot marry until he does. He is also important because he is not only a secondary father figure, but is also a man who lives in a magically real world.

The most striking sequence of the film comes early as the uncle stands in a classroom discussing various colors with the children. We see him point out to a distant field, his finger coming to rest on a poppy in the perspective we are given. The children shout the color, he makes a grasping motion with his hand, and he pulls in a bouquet of flowers. He does the same with yellow wheat. He points to the sky and pulls back a hand covered in blue; his other hands points at the sun and turns yellow. It’s a striking series of images, all done with simple cuts instead of fancy CGI or camera tricks, and it surprisingly beautiful.

Recently on her site, Jessica at The Velvet Café asked opinions regarding having to watch films a second time. I jumped in almost immediately and said that I don’t mind repeat viewings, but that I like to have something after a first viewing for me to latch onto. Gabbeh almost put a hole in that statement for me, since I did watch it a second time immediately—pretty much as soon as I dropped back to the DVD menu, I pressed “play” again. And I didn’t really get it the first time. That thing that I latched onto, though was just how plainly gorgeous it is. It’s a beautiful film, filled with amazing colors and landscapes and scenery. Everything, from the clothing to the rich flowers and plants is incredibly lush and beautiful. Opaque though the film may be, it is an absolute visual feast, the sort of thing many (including myself) would be happy to watch just for the spectacle it presents on the screen. It doesn’t hurt in the rewatching that the film is also ridiculously short, coming in just a few heartbeats longer than an hour (actually, just under 70 minutes).

Like any good film that attempts to make an artistic statement far more than it attempts to tell a compelling and concise narrative, the ending is one open to a number of interpretations. Makhmalbaf is almost certainly hinting at something going on in Iran with the end of this film, but I’m not nearly aware enough of Iranian politics to know exactly what he’s trying to say. I know enough to know that it’s there, and that’s about it.

So what did I think? I thought it was beautiful. There’s still a mystery here to be unraveled, I think, but it’s a pretty mystery wrapped up in a gorgeous bow. I could watch the uncle talk about color for an hour without being bored. That, in and of itself, is worth something. A little investigation shows that the whole idea of color is itself political in Iran—women in the cities were, at the time of filming, prevented from wearing the colors that women in this film are resplendent in. This knowledge lends a new and interesting twist on the repeated idea that color is life. Perhaps it’s more accurate to suggest that color is freedom, but for those under the heel of an oppressive, dogmatic theocracy, there may well be little difference.

Why to watch Gabbeh: It’s stunningly beautiful.
Why not to watch: You’ll probably need to watch it at least twice.