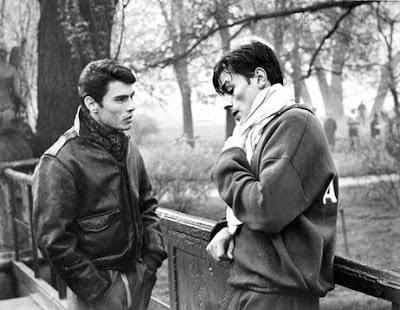 I took a long look at the films still remaining for me today. There are (with today’s film out of the way) 306 films left, and a hefty chunk of those are films that are difficult to find. So after a bit of searching around, I decided it was time to concentrate a little more on these more difficult films, knowing there’s all the time in the world for those films that are easily located. Since I’m also being conscious of film length, I opted for the longest remaining film that was otherwise difficult to locate, and thus I spent close to three hours watching Rocco e i Suoi Fratelli (Rocco and His Brothers), a film straight from the heart of Italian neo-realism.

The Parondi family moves from a little down in the south of Italy to Milan in the hope of making a better life for themselves. The family matriarch, Rosaria (Katina Paxinou) comes with four of her sons: Simone (Renato Salvatori), the eponymous Rocco (Alain Delon), Ciro (Max Cartier), and the young Luca (Rocco Vidolazzi). Her fifth son, Vincenzo (Spiros Focas) is already in Milan, which is why they came there. Vincenzo is currently engaged to Ginetta (Claudia Cardinale), but things immediately go awry at the arrival of his family.

The Parondis eventually wind up in a tenement and struggle to survive. They get work where they can, and eventually things look up slightly for them .Ciro goes to night school and eventually gets a job in an Alfa Romeo factory. Rocco gets drafted and heads off to the army. Simone, it seems, has some talent as a boxer and pursues this path.

But even as things are looking up, dark clouds loom. Simone, of the five brothers, is the one with the most earning potential, but also the one with the worst moral compass. Early in the film, while Rocco is working at a cleaners, Simone steals a shirt and later returns it, and then seduces the woman who runs the place so he can steal her brooch. As the film continues, we learn that this is just the tip of the Simone depravity iceberg, and that said iceberg runs pretty deep. This is in contrast to the other brothers, particularly Rocco, who is almost saintly.

Everything, or almost everything in the film centers around Nadia (Annie Girardot), a prostitute who is initially rescued by Vincenzo, then has an affair with Simone, and finally winds up with Rocco. Simone, being the pig of a person that he is, is unable to accept the fact that she winds up with his younger brother, even though the two of them had been split apart for two years once she falls in with Rocco. This leads to one of the more surprisingly brutal sequences of the film in which Simone forces Rocco to watch while he rapes Nadia, and then proceeds to beat the shit out of Rocco. It’s ugly and pretty awful.

But even while it’s ugly and awful, it also comes across as more real than a lot of what happens. Rocco e i Suoi Fratelli is the sort of film that enforces the stereotype of overly emotional and dramatic Italians. Nothing in this film happens without shouting or a face slap or two. After the rape incident, Nadia and Rocco try to make sense of things. This involves a lot of threats of suicide, running around in a church, and shouting at each other in public. This sort of in-your-face emotionalism smacks not of real drama, but of soap opera. There are a lot of dramatic turns and gasping sighs, and it all comes off as false. Seriously, when Rocco tells Nadia to go back to the guy who just raped her, I just about threw my hands up and quit. And then she does go back to him. Seriously, what the hell?

The other thing going on here is that this film is nearly three hours long, and the story it tells doesn’t specifically warrant this much length. There’s a lot of extra in here that seems to serve as character study or just additional narrative that doesn’t really play into the where the film goes. And, true to neo-realist style, after three hours we still don’t really get anything like a resolution.

The film is broken up into five unequal parts (Luca, the youngest brother, gets about 20 minutes in his story), each one named after one of the brothers. Each story is marginally about the brother in question, although the stories of Simone and Rocco tend to dominate the main narrative. There’s also a lot of boxing, some of which looks pretty good and some of which comes off as merely goofy.

What it comes down to is this—the story is a good one, but the acting is so overly dramatic that it comes across as insincere. I fully expected an organ to start playing intense minor chords as we pulled in to a close-up of one of the characters. Even the characters fall into the same sort of melodrama, with Simone being the purely venal brother capable only of destroying the others and Rocco the saintly one, trying to keep everything from falling apart. I get why this film might be considered important, but I don’t get why it was specifically worth my three hours. And yet, despite this, there are moments that are absolutely worth seeing, as is the resolution, which interestingly gives the summing up not to Rocco, but to Ciro and Luca.

Why to watch Rocco e i Suoi Fratelli: Family relationships are the most interesting.
Why not to watch: There aren’t many ways this story can go, and it takes a long time going there.