Film: Yi Yi (A One and a Two)
Format: DVD from Rockford Public Library on kick-ass portable DVD player. 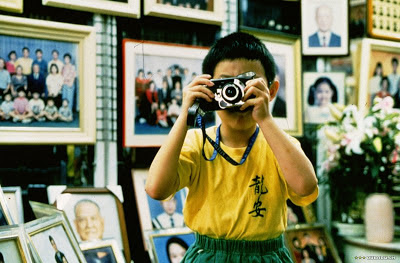 Each new film is its own particular adventure. There are some that I go into with a particular idea in mind, of course, and others that I walk into cold. Edward Yang’s Yi Yi (A One and a Two) is such a film that I watched with little or no expectations. I knew only that it came recommended and that it tipped the scales at close to three hours. Since watching the longest films is always one of my goals in a given month, it seemed time to knock this one off the list.

Now that I’ve watched it, I’m not really sure how to react to it. Yi Yi has moments of beauty, flashes of brilliance, hints of genius. And yet despite this, I feel strangely disconnected from it in a way I didn’t expect. I don’t dislike the characters or the film itself. For whatever reason, though, I never felt compelled by or as invested in the characters as I should have been. Yi Yi is a slice of life, but it’s nothing more than a slice of life. The drama here is real, but the dramas that unfold on the screen are small dramas, important to those who experience them, but ultimately life on a small scale. Perhaps it’s this that left me less than compelled. I’m not sure. Something did, though, because try as I might, I simply couldn’t become as emotionally invested in these characters as I should have been.

The film starts with a wedding, but not of one of the main characters. This is the wedding of A-di (His-Sheng Chen) and his pregnant starlet girlfriend Xiao Yen (Shu-shen Hsaio). A-di has forced the wedding to be delayed so that they could marry on what his horoscope considered as the luckiest day of the year. Luck, however, is not with the family. Two significant events happen at the wedding that change everything. First, family patriarch NJ (Nien-jen Wu) runs into Sherry (Su-yun Ko), the woman he jilted 30 years previously. Second, NJ’s mother (Ru-yun Tang) collapses from a stroke and ends up in a coma.

What follows is a sort of re-evaluation of life from three of the four family members as each comes to something like a point of crisis. For NJ, the meeting with an old flame is merely a part of the issue. His company did not guard well against financial losses and now is in a desperate position. His wife, Min-Min (Elaine Jin) undergoes a sort of existential collapse and runs away to a spiritual retreat. His daughter Ting-Ting (Kelly Lee) finds herself as the pivot of a love triangle between a friend and her boyfriend and has decided that because she may have forgotten to take out the garbage, she is inadvertently responsible for her grandmother’s coma. NJ’s son Yang-Yang (Jonathan Chang) gets in trouble at school and becomes interested in photography, taking pictures of things other people can’t see, like the backs of their heads. On top of this, A-Di’s marriage gets off to a rocky start when his child is born on an unlucky day and his ex-girlfriend Yun-Yun (Hsin-Yi Tseng) starts showing up, wringing her hands about not still being with him. He also owes a staggering amount of money to NJ, and everything he tries to recoup his losses fails spectacularly.

All of these stories are individually interesting, and should be just as interesting as they intermingle and progress together. Regardless of that, I found that I just couldn’t get too interested in much that happened on the screen. It’s certainly not the photography. Yang’s camera is reminiscent of Yasujiro Ozu; it finds a comfortable spot and sits, allowing the action to unfold in front of it. It’s not the characters, either, since these end up being people who are easy to become attached to. But there is a distance here for some reason. I felt constantly at arm’s-length from each character and from all of the stories going on.

What I’m left with is that it’s Yang’s style that bothers me more than anything. I had a similar reaction to Guling Jie Shao Nian Sha Ren Shi Jian in that everything felt detached in some respect, like I’m viewing a family drama as if through a window rather than from inside the house. For all of the humanity of the stories, the film feels entirely impersonal, and that strikes me as a huge failing. I should be more invested here than I am. The failure may well be with me, but if it is, my gut tells me that I’ll react to most of Yang’s catalog the same way.

On an unrelated note, the vast number of names consisting of a duplicated syllable really started to bother me. Did we really need Yang-Yang, Ting-Ting, Yun-Yun, and Min-Min?

Why to watch Yi Yi: A slice of life from modern Taipei.
Why not to watch: It has an odd quality of detachment.

Email ThisBlogThis!Share to TwitterShare to FacebookShare to Pinterest
Labels: A One and a Two, drama, Edward Yang, Yi Yi