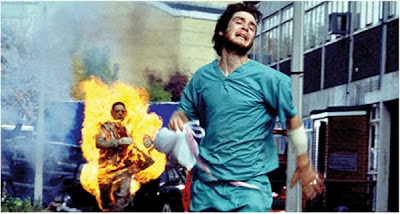 The first time I looked through the 1001 Movies book, I was surprised to see that Danny Boyle’s 28 Days Later didn’t make the cut or had been eliminated in a previous edit. I was slightly more perturbed when I realized it was the former, not the latter. People there are who complain of the third act in this film (not me), but it remains as an innovative and exciting horror film, a possible genre rewrite, and an exercise in truly virtuoso filmmaking.

First, let’s get this out of the way right now: depending on your point of view, 28 Days Later either definably is or is not a zombie movie. I know the arguments on both sides, and I do have an opinion on it, but I’m not going to offer it here. There are solid arguments on both sides. Be warned, gentle reader—any comments below that address this question, either is they is or is they ain’t some zombies, will be deleted. I’m not turning my comments section into a war zone.

We open in an animal research lab where a group of monkeys have been infected with something called rage. We don’t know it yet, but the rage virus will be the main villain in this film in a very real way. A group of activists break in and release the monkeys only to discover that these monkeys are indeed quite contagious and are more than happy to spread the virus to human victims. The rage virus is fast; a human who becomes infected has maybe 20 seconds before becoming one of the infected, so there are no long, drawn-out death scenes here. The infected become entities of pure ferocity and anger, attempting to kill anything they come across. They bite, kick, scratch, and frequently vomit blood. They are also terrifyingly fast. The infection is spread through blood and saliva, and is, as mentioned, virtually instantaneous.

So with the initial infection happening, we fast forward a month (thus the name of the film) and cut to Jim (Cillian Murphy), a former bicycle courier who was clipped by a car and wound up in the hospital. Jim awakens, naked and starving, barricaded into his room. Upon leaving, he discovers not just a deserted and empty hospital, but a deserted London. This sequence of Jim wandering around the deserted London, passing in front of major landmarks with no signs of life around him are some of my favorite film sequences of the last 20 years. They look real because they are real. Boyle and crew cordoned off small sections of road, shot quickly and cleaned up so as not to hold up traffic for too long. There’s a desperation in these shots that wouldn’t have worked with CGI or rear projection.

Eventually, Jim meets up with Mark (Noah Huntley) and Selena (Naomie Harris), who explain to him everything that has happened in the past month. Jim wants to see if his parents are alive, even though he knows they aren’t, so the next day the trio walks to Jim’s parents’ house and finds them dead. They are attacked in the night by a couple of the infected, and Mark is injured. Selena kills him without remorse and without thinking. This is the world they live in. Later, Jim and Selena discover a father and daughter pair, Frank (Brendan Gleeson) and Hannah (Megan Burns). Here, they discover a radio broadcast telling of a military post which holds “the answer to infection.” The quartet heads off, leading to the third act of the film.

A lot of people don’t like Boyle’s third acts. Were this a film like Sunshine that is 2/3 near perfect and 1/3 utter shit, I’d be willing to agree. However, I have always found the third act of 28 Days Later to follow naturally from the first two, and I like where the film goes. The military base, headed by Major Henry West (Christopher Eccleston) is both a place of security and a place of a different sort of danger, and it works perfectly. It’s also a nod to George Romero’s underrated Day of the Dead in the way the last thirty minutes or so of the film play out.

28 Days Later does almost everything right. First, Boyle shot it direct-to-video, which gives the film a visceral feel, at times almost as if we are watching news footage. The warmth that is so evident in actual film is gone here, and instead what we see looks like the 6 o’clock news. That’s very effective. The virus itself is cool, because while there are holes in that part of the plot (why don’t the infected attack each other?), it almost seems like it could really happen. We also get a few good scares early on—the opening scene, the great scene in the church, the attack in Jim’s parents’ house, the scene in the tunnel—broken up with scenes of particular beauty, like the shopping scene and the picnic.

Mostly, though, I love how raw this film feels. I love how throughout there is always a sense of attack coming, that nowhere is safe, but merely safer than somewhere else. For those who call this not a zombie film, it is a throwback to films like The Crazies with the idea of an outbreak causing terrible violence, madness, and societal breakdown. For those who call it a zombie film, it is a complete rewriting of the genre, one that stays true to its roots but blossoms in a completely different way.

I’m not, however, completely sold on the ending. There are several alternate versions. The original script, never shot, was patently stupid and it was a smart move to pitch it. There’s a less happy, more ambiguous ending, a sort of middle ground. There’s also a completely downbeat ending that, for me, bookends the film perfectly and ends the story the way it should be ended.

It’s worth noting that the sequel, 28 Weeks Later is mostly a waste of time. However, the first 10 minutes of that film are as terrifying and as visceral as anything that happens in this one.

Why to watch 28 Days Later: It’s scary as all hell.
Why not to watch: Is it a zombie movie or isn’t it? Remember—keep that out of the comments. I’m not joking.