I get the impression sometimes that I’m really jaded. The List sometimes feels like it consists of about 90% films concerning World War II. I’ve lost count of the number of World War II epics, holocaust documentaries, and other similar films on the list. I suppose it’s only fair—it is one of the most important events of the last 100 years and in many ways one of the two or three most defining moments of the last century. It’s only natural that a lot of our art would concern it. But it’s getting more and more difficult to get me that interested in it any more since I’ve seen so much. So when another film pops through the transom and appears to be about the same thing, I breathe a heavy sigh. 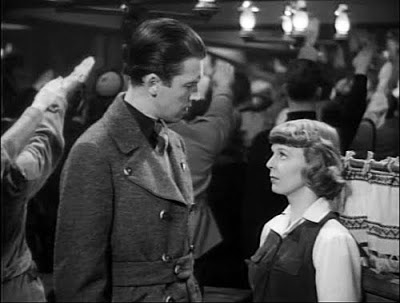 The lesson for the day, though, is that I should learn to trust a little more. All I knew about The Mortal Storm going in is that it took place in Germany during the rise of Hitler, so I fully expected it to be just more of the same. I watched the trailer before starting the film and discovered, no shock here, that it was banned in a number of countries—all Axis powers, I would assume, as it does not paint a very flattering picture of the Austrian corporal and his oppressive social system. Again, this is not too terribly shocking. What I didn’t expect was how fully engaged I would be in this film, and how quickly that happened.

We start in 1933 on the birthday of Professor Roth (Frank Morgan, not as recognizable visually, but with the unmistakable voice of the Wizard of Oz). That day in his class at school, he is awarded a trophy by his many students and admirers. Later that evening, his daughter Freya (Margaret Sullavan) is proposed to by her long-time boyfriend Fritz (Robert Young), and she tentatively accepts. During Professor Roth’s birthday party, we get the news that Hindenburg has appointed Hitler as the new chancellor, and things immediately start to fall apart. Professor Roth, his wife (Irene Rich), and Freya are all pacifists and believe strongly in the human right to free thought. So too does family friend Martin Breitner (James Stewart). Fritz and the Roth boys Otto (Robert Stack) and Erich (William T. Orr) are all followers of Nazi idealism and are thus excited by the news.

The social order quickly changes. Freya and Fritz fall out quickly as he is condescending to her and she is unable to accept his philosophy. It doesn’t help that she and her family are distinctly non-Aryan. Martin gets into trouble defending friends against the Nazis and refusing to sign up with the party. In fact, he essentially divorces himself from the Roth family, not wanting to be around the boys or Fritz. In one of the most intense sequences, Freya convinces him to come with her to an evening out at a bar. Once there, a group of loyal Nazis demand the singing of a fascist hymn, and several patrons refuse. It’s a great moment, with Martin and Freya standing, staring at a horde of people singing and throwing a Nazi salute, unable to bring themselves to join in. Martin becomes persona non grata, and Freya is refused the ability to even associate with him. Eventually, Martin leaves the country guiding an old friend to Austria, and due to his involvement in the escape of this friend, is unable to return to Germany.

Things take a turn for the worse when Professor Roth is arrested for putting forth the scientific fact that the blood of Aryans is indistinguishable from that of non-Aryans. This lands him in a concentration camp, and while his wife and Freya are desperate to flee the country, they will not without him. Eventually, they do leave the country, and Freya is detained for attempting to bring her father’s last manuscript over the border. This necessitates a rescue, with Martin returning to bring her to safety, and the inevitable pursuit by a patrol led by Fritz, aiming to detain or kill his former friends.

What makes The Mortal Storm work so well is that it doesn’t play the drama for anything cheap. These are real people going through these terrible times, and there’s no need to ramp up the drama. Instead, we’re given a good story with the drama that is simply naturally there in the situation. Margaret Sullavan is completely believable in her outrage and Fritz’s insistence that women can’t understand politics and that if she wishes to be with him, she’ll have to accept everything that he believes without question. For his part, James Stewart plays the same character he frequently did at this point in his career—Martin Breitner is little more than a German version of Mr. Smith, a quiet man of idealism filled with righteous anger at what he sees as little more than moral corruption around him.

For as much as The Mortal Storm plays out like we expect, there are a few painful twists, and the ending is something of a surprise. These twists aren’t there to heighten melodrama, but to lend an air of realism to the film that might not otherwise exist. It’s obvious in many ways that this is a propaganda film, looking to incite the American people to at least an empathy with the Allied forces against Germany and the Axis. It’s made all the more effective because it comes across not as Hollywooded up, but as a document depicting a regime of casual cruelty and almost entirely at odds with basic American ideals.

In short, The Mortal Storm was a complete surprise, and a good one at that.

Why to watch The Mortal Storm: Surprising realism from an era not known for it.
Why not to watch: While you might appreciate the story, you won’t like what happens.