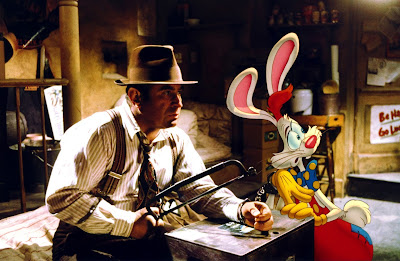 I remember when Who Framed Roger Rabbit? came out. I was probably too old to really be as excited by the idea of it as I was, but I knew it would be something I had to see. The whole sell of this is that all of the great cartoon characters from the past would appear on screen at the same time. We’d see Bugs Bunny and Mickey Mouse on screen at the same time. I mean, if you grew up on classic cartoons, it was something that had to be seen, even if it sucked. Happily, Who Framed Roger Rabbit? doesn’t suck. Instead, it’s both an homage to all of these classic cartoons and an homage to film noir.

The conceit here is that cartoons, or “toons,” are real and actually exist in the real world. In this world, we have Eddie Valiant (Bob Hoskins), a real man who used to work private detective cases for various toons. He’s been on the skids lately because his brother was killed by a toon during an investigation. Since that time, Eddie has avoided toons, Toon Town, and most things that don’t involve a whiskey bottle. However, he’s called in by cartoon maker R.K. Maroon (Alan Tilvern) to perform a job. One of his stars, cartoon Roger Rabbit (voiced by Charles Fleischer) has been unable to concentrate on his work because his wife Jessica (a cartoon human voiced by an uncredited Kathleen Turner) has been seen around town with Marvin Acme (Stubby Kaye), a man who owns a joke factory. Roger is devoted to his wife, and Maroon wants pictures to get him to realize that she is two-timing him by playing patty-cake (yes, literally) with Acme. So Eddie gets the pictures.

But then Acme ends up dead from being directly under a safe, and naturally the entire town thinks that Roger is guilty. Roger isn’t, though, and comes to Eddie for help. Eddie relies on former assistant turned barmaid Dolores (Joanna Cassidy) to protect Roger while he finds out what is going on. What he discovers is that the new judge in Toon Town, Judge Doom (Christopher Lloyd), wants to destroy the toons. There are also some interesting dealings going on between Maroon and Acme. And then there’s the fact that Acme’s will is missing.

I watched this today with my younger daughter. It had been years since I’d seen it and while I remembered the basic story, I had forgotten a great many of the details. For one thing, I’d forgotten how some parts of this film were mildly inappropriate for children. Eddie Valiant, for instance, spends a lot of his time drinking, he gets into a compromising position with Jessica Rabbit, and there’s a good deal of mild swearing—no f-bombs, but a few “damns” and “hells” and “son-of-a-bitches.” There isn’t anything here that I would say a kid couldn’t handle, but I was surprised when it turned up.

The best thing about Who Framed Roger Rabbit? is that it’s incredibly smart. It could have very easily focused on all of those classic cartoon characters. Instead, those characters are relegated to the background, having a line or two and otherwise being a part of the scenery. I’m certain the temptation was absolutely there to put some of these characters front and center. Instead, we focus on the story itself and the new toons—Roger, Jessica, Benny the cab, Baby Herman, and the rest. And watching it, you don’t even realize it. I know when I went to see this in the theater, I went because I wanted to see all of these classic characters on the screen interacting with people. And I got that, but I never realized how little of that is there. I was always happy when it happened, but never cared when it didn’t happen and we were instead focusing on the story being told.

This was also a coming out party for Bob Hoskins in a real way. He gives a tremendous performance here, which is no real surprise, but he also acted in a number of scenes across from nothing, with the toons only being added in later. It’s almost a lost art. With the way that CGI is being used today, actors get to work against actual people who are then digitally changed in production. Hoskins didn’t get that sort of benefit here, instead having to pretend to be holding Roger in key scenes, and he plays it perfectly. It’s perhaps my favorite Hoskins performance, and that’s saying quite a bit based on his career.

Needless to say, I love this film. It’s fun, it’s crazy, it’s innovative, and it’s remarkably whole in terms of world creation when it could be cheap and with plenty of wires showing. It’s also a solid film noir, and it works on that level, too. If you haven’t seen this, gather up a few kids who know who Bugs Bunny and Tweety are and watch it with them. Relive a bit of your cartoon-loving childhood and educate them in terms of classic film noir sensibilities.

Why to watch Who Framed Roger Rabbit?: One of the most innovative films ever made.
Why not to watch: You have a sad existence and can’t be cheered up by pure joy.

Posted by SJHoneywell at 2:29 PM