If you say that you don’t like anime, fans will tell you that it’s an unfair thing to say. Anime, they will tell you, is a style, not a genre. Anime comes in all different stripes and genres, so claiming to dislike it is very much like saying you don’t like movies. Fair enough—it’s a style and not a genre. In general, though, it’s a style I don’t like that much. I never feel centered watching most anime. There never seems to be enough exposition for me to feel like I know what’s going on. Fans of the style typically cite Hayao Miyazaki as the best choice for a hater. 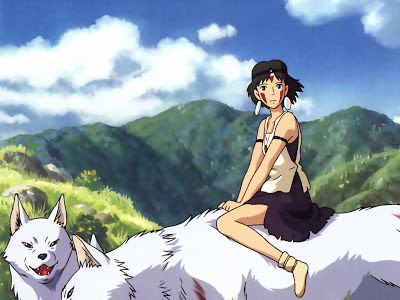 Okay. I’ve seen a few Miyazaki films. This, in fact, is the second time I’ve seen Mononoke Hime (Princess Mononoke). I will admit that there is a particular beauty to this film, and a toughness I didn’t recall. But I still don’t really understand what the hell is going on through a lot of it. Incidentally, I don’t typically watch dubbed versions of films, but with animation, it seems to matter less. Also, the English language version of this film feature some pretty good voice talent, so I went with it.

Anyway, the lack of exposition starts up right away. In a village of the Emishi people (and we’re not told much about them), a giant demon-possessed boar attacks. Ashitaka (Billy Crudup) defends his village and kills the boar-demon, but it wounds him, putting a curse on his right arm. Now, slowly, he’ll start to become possessed by a similar demon. This will give him tremendous strength and abilities until it takes him over and eventually kills him. He leaves his town in search of where the boar came from. On the journey tracking the boar, he meets a monk named Jiro (Billy Bob Thornton) who tells him that a great forest spirit might be able to cure him.

Eventually, Ashitaka reaches a city called Iron Town. The people here smelt iron, and frequently clear large sections of the forest to do so, using the iron to build weapons. In fact, it was a ball from one of their rifles that caused the boar to turn into a demon in the first place. The leader of Iron Town, Lady Eboshi (Minnie Driver), is driven to destroy the forest spirits to make the town safe. While this is the indirect cause of Ashitaka’s curse, he finds it difficult to hate Eboshi completely, since she has a habit of rescuing lepers and prostitutes and giving them meaningful work and a home.

Eboshi is definitely opposed by San (Claire Danes), who the people of Iron Town call Princess Mononoke. San was abandoned by her parents and adopted by Moro (Gillian Anderson), a wolf goddess. Now San assists the wolves in fighting the people of the town in her effort to save the forest. During a raid on Iron Town, San is wounded and Ashitaka rescues her, getting himself shot in the process. This leads to an encounter with the forest spirit itself. It cures the gunshot wound, but leaves Ashitaka cursed.

And then comes the twist. Jiro is no monk, but a bounty hunter of sorts. His goal is to take the head of the forest spirit and bring it to the emperor in the belief that it will grant eternal life. To this end, he enlists Eboshi, promising her that with the forest spirit dead, the entire forest will fall into the human domain, the animal gods will lose their power, and it will become safe for everyone.

All of that is well and good. The story is a decent one, and it was adapted by Neil Gaiman, who is certainly no slouch in the coming-up-with-stories department. But it still feels at least partly unknowable to me. I don’t understand what all of the creatures are, or the Japanese concept of “demon,” which is considerably different from the Western conception. The film, I get the sense, expects me to know all of this going in, and I simply don’t.

So, while Mononoke Hime is certainly beautiful to look at and gloriously animated, I simply feel like there is something that I am missing throughout. There’s something integral here, something cultural, that is just going over my head and that refuses to let me latch onto it. I try, but I fail almost every time. In other words, I feel like I lack the cultural context to truly understand what is going on.

I would be hard-pressed to say I didn’t like this film, but I’d be equally hard-pressed to say that I love it. I respect it for what it is, knowing that there will always be a part of it that is constantly out of my reach. I get that it’s a fable on environmentalism. I get that it’s cool when demon-fueled Ashitaka severs a guy’s arms with an arrow. I get that there are few animated films of this quality in the overall look and design and complete immersion in the imagination of a fabulist. I just wish I understood it more.

Why to watch Mononoke Hime: Breathtaking animation.
Why not to watch: Lack of cultural context.