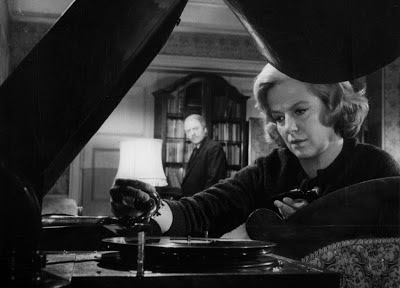 One thing I love about pursuing a list of films is that I frequently encounter films that I’ve never heard of that I really enjoy. I admit that I was predisposed to like Séance on a Wet Afternoon based on the title alone and became far more interested when I learned of the premise. One of the classes I sometimes teach is a class in critical thinking, and I make it a point to spend a portion of the class debunking the sort of thing that the gullible waste their money on, people who speak with the dead being one of those things. Séance takes the sort of attitude I have, thankfully, placing a charlatan front and center and dealing with the consequences of her private madness.

Myra Savage (Kim Stanley) is a medium who communes with her dead son, Arthur. She conducts séances and is assisted by her husband, the sick and weak-willed Billy (Richard Attenborough). Her plan, which she claims comes from Arthur, is to “borrow” a child from a wealthy family and hold the child in seclusion. Then, using her powers as a medium, she will tell the family where the child can be found, rescuing both the child and the ransom, thereby becoming famous as a medium. They put the plan into action immediately. Billy distracts the driver of Amanda Clayton (Judith Donner) and then drives away with the girl.

Once at their house, they put her in a quiet room that has been made up like a hospital room, telling the girl that she has double German measles, hoping that she isn’t bright enough to figure out the ruse. Both only go into the room with surgical masks on to prevent the girl from being able to identify them. Myra and Billy send a carefully crafted ransom note and Myra herself goes to contact the family and offer her services. The father, Charles Clayton (Mark Eden), is skeptical, but it soon becomes evident that his wife (Nanette Newman) wants to believe.

The third act is where the film really becomes something more than just a pseudo-psychic thriller about a deluded mystic. A couple of close calls convince Myra that she has been told by her dead son that Amanda Clayton would be happier on the other side. In short, the plan goes forward, this time with Billy killing the girl and dumping the body and Myra using her “gifts” to locate the body for the police.

Séance on a Wet Afternoon does just about everything right. It’s reminiscent in many ways of a film like The Haunting in its black-and-white cinematography, use of dramatic angles, and most especially in its ability to create an overwhelming mood. The idea here isn’t to scare anyone, but to disturb and make uncomfortable, and it succeeds brilliantly.

There’s a lot going on here. Foremost is the relationship between Myra and Billy. At times, it feels almost like a parent-child relationship, but the brilliance is that these roles switch throughout the film. Initially, Myra is dominant and she maintains a level of control over Billy for the entire film, but Billy asserts himself at several times. Even in these moments, though, the parent/child idea is kept. Myra is smothering and dominating, and Billy is weak and thus goes along with it. However, it becomes quickly evident that Billy often does what he does and says what he says to humor his wife. The best example of this is early on when the two are discussing the kidnapping plans. Myra is listening to music and Billy wants to turn it off, but she won’t let him. At a moment of tension in the conversation, she turns off the Victrola. A minute later, she realizes that the music is off and accuses Billy of doing it because she wanted it on. Billy accepts her accusation meekly, knowing that it was she who did it.

The second moment like this comes at the beginning of the third act when Myra comes up with the idea of killing Amanda. Here, finally, Billy objects to Myra’s idea and tries to break her out of her personal delusion about her psychic abilities. We learn the truth about the son here (I won’t reveal it) and Billy tries to bring his wife back to the real world, claiming that the idea of killing Amanda comes from Myra herself (as does everything else) rather than from the other side. Myra, of course, is steadfast in her belief that what she is doing will help everyone, leading to the absolutely staggering final 10 minutes.

Richard Attenborough’s performance is as good as he ever is, playing a henpecked and browbeaten man unable to get himself away from his wife’s massive ego and personality. It is Kim Stanley, though, who is the real standout in this film. She plays the role of Myra with a combination of sweetness and menace. She is a woman who gets everything she wants from her husband not through anger but through reminding him of his weakness and dependence on her. Everything she does, she does for herself but with the veneer of doing it for someone else.

There is so much going on here that a simple review can’t really do it any justice. It’s the sort of film that needs to be experienced—the individual parts are fantastic, but the end result is so much more than the parts. My only nitpick is that Richard Attenborough was forced to wear a prosthetic nose for the production, and it looks very much like a prosthetic nose. But really, that’s it. Watch this; you won’t be sorry.

Why to watch Séance on a Wet Afternoon: It’s holy-shit creepy.
Why not to watch: Richard Attenborough’s prosthetic nose just doesn’t look right.