Why I Skipped Prom 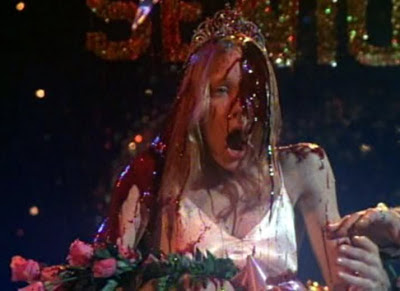 I like a lot of smart horror movies from the 1970s and 1980s. It was sort of a golden period for horror films, and while there’s plenty of dross, there’s also a crap-ton of quality films. Carrie is one that passed over me. In fact, it’s one of the few pre-1990 Stephen King books I haven’t read. I guess I was never interested enough in the story to get through it. Still, eventually I’m going to see everything on the giant List o’ Doom, so the night before Halloween is as good a night as any to finally put it in the spinner and see what I’ve been missing.

Carrie is the story of a shy, awkward high school girl named Carrie White (Sissy Spacek). Essentially friendless and even mocked by her teachers sometimes, Carrie is very much the social outcast through and through. She isn’t helped by her mother, Margaret (Piper Laurie), who is religion-obsessed. Actually, that puts it mildly. Margaret White tends to favor the Old Testament over the New except for the blood of Jesus. Everything in her world is a sin. Our introduction to Carrie comes when she experiences menarche (go look it up) during a shower after gym class. True to her pathological religious roots, her mother claims that this is due to sin. Carrie is frequently punished by being thrown into a closet and forced to pray to a pretty gruesome Christ statue.

This experience is all the more traumatizing because Carrie had never been taught to understand her body or the changes involved in puberty, and because it essentially happened in public. Her gym teacher, Miss Collins (Betty Buckley) attempts to help Carrie, but doesn’t really seem to get anywhere. It also doesn’t help that her principal can’t seem to get her name right, continually calling her Cassie. As Carrie becomes more and more frightened or more and more frustrated, things happen around her specifically, objects appear to move on their own accord. A little research teaches her that she is telekinetic. Her mother, naturally, thinks she is infested by Satan.

Miss Collins, upset by the treatment of Carrie, attempts to have all of the girls from the locker room banned from prom, but is unable to pull this punishment off. Instead, she arranges for a week-long detention with her—basically an hour of hardcore calisthenics—for a week. Chris (Nancy Allen) reacts badly and eventually walks off, earning a ban for herself and her boyfriend Billy (John Travolta). Another student, Sue (Amy Irving), has a change of heart. She convinces her boyfriend Tommy (William Katt) to take Carrie to the prom in an honest attempt to get the girl to come out of her shell.

Even if you’ve never seen Carrie, you know what happens. Righteously pissed off about being banned from prom, Chris decides on her revenge. I won’t go into it, but suffice to say that Carrie doesn’t react well, and her burgeoning telekinetic powers go into hyperdrive. There are moments of pain and horror before this, but once Chris’s revenge is enacted, the movie heads straight down the road of sheer insanity and terror.

What surprised me the most about Carrie is how much a lot of it played like an after school special. I don’t mean this in a bad way, but really, this is very much a film about the dangers of bullying. I was also surprised by a number of the characters. I had been led to believe that everyone was in on the prank pulled on Carrie during the prom, but this is not the case. Sue’s motives, and even Tommy’s motives, are completely honest and decent. What happens is terrible, and no less terrible because the bulk of the people who Carrie eventually takes revenge on don’t deserve it at all.

Sissy Spacek is fantastic here—she’s always been a chameleon, though, and so she slides into this role perfectly. According to the backstory, Brian De Palma wanted her originally for the role of Chris, evidence that Spacek could easily have performed as both the tormentor and the tormented. It is Piper Laurie, though, who is perhaps the most terrifying thing here. In many ways, Carrie herself is like Frankenstein’s monster. She is misunderstood and feared because of what she is, but it is beyond her control. Margaret White is the true monster in the story.

What works here more than anything is the slow burn. We get glimpses of Carrie’s power and her mother’s insanity through the first hour of the film, and then for a bit, everything seems like it might be alright. But when the shit really hits the fan, it hits like nothing else. The last chunk of the movie is an accelerated ride into sheer chaos and insanity, and it’s a fantastic thing to watch. It’s a smart move to settle us and let us think that everything is going to be fine only to pull the rug out from under us. But Carrie goes further. We don’t just get the rug pulled away—the rug is covering up a pit of crocodiles and rusty spikes, and we’ve got nowhere to go but down into the pit.

This is a genuinely disturbing movie that ends with some real scares. And that, more than anything, makes it worth the time and the price of admission. See this—don’t wait as long as I did.

Why to watch Carrie: Holy shit scary.
Why not to watch: Reliving high school.