Watching Oscar: Witness for the Prosecution

I have been having a serious problem lately with spambots. For whatever reason, the original version of this review, posted September 20, has attracted 20-30 spam posts per day. I'm deleting the original post and reposting here in an attempt to fix this issue. On the plus side, Blogger's spam filters are evidently excellent, because not a single spam comment has made it through. Fingers crossed, here we go again. 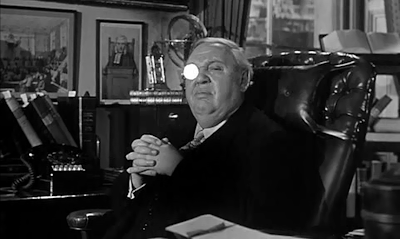 Charles Laughton evidently once said of himself that he had a face that could stop a sundial. Be that as it may, the man could bring it on the big screen. When he bit down into a role, he made it his. He more than anything is the centerpiece of Billy Wilder’s Witness for the Prosecution, and that’s saying a lot. When Laughton is on screen with Wilder directing, in a Wilder script based on a work by Agatha Christie and a cast that features Elsa Lanchester, Marlene Dietrich, and Tyrone Power, you’re saying quite a bit.

Tubby, cigar-smoking, monocle-wearing barrister Sir Wilfrid Robarts (Laughton) has just returned to his law offices after a long stay in the hospital due to a heart attack. He’s returned against the wishes of his doctors and most especially his nurse, Miss Plimsoll (Elsa Lanchester). However, returned he has, and he’s been given a nice load of calm cases to try—nothing exciting and most especially no murders. These plans go immediately awry when we meet Leonard Vole (Tyrone Power), a man who is accused of murdering an old widow for her money.

What ensues is a case with a few very interesting twists. We learn of Vole’s wife Christine (Marlene Dietrich), a German national brought out of the devastation of post-war Germany by Vole. Vole himself is something of a drifter, unable to keep a job. His claim is that he befriended the old lady (Norma Varden) because she seemed lonely and maintains that he didn’t know that she had rewritten her will to name him as the main beneficiary. But there are conflicting stories about this, and most importantly about the real identity of Christine. A surprise witness or two and some shocking testimony later, we’ve got the makings of the sort of case that lives forever in the memory of a populace.

This is absolutely a Billy Wilder film. There are moments of genuine comedy throughout the film, but these moments frequently come with an acidic bite to them. Sir Wilfrid is scathing to anyone who displeases him and pours out the brunt of his anger on Miss Plimsoll, who soaks it up and shrugs it off. Elsa Lanchester as Miss Plimsoll spends the bulk of the film flitting between various states of outrage of Sir Wilfrid’s shocking desire to keep slurping down brandy and sneak cigars. The two constantly get the better of each other and most of the truly comedic moments in the film come from their interplay. It’s no shock that two of the Oscar nominations for this film were for Laughton and Lanchester as Best Actor and Best Supporting Actress respectively.

But while Laughton is the main reason to pursue this film with Lanchester adding the right level of comedic notes, there are plenty of other things here worth seeing. Tyrone Power, for instance, gives a great performance as a man wrongfully accused of a terrible crime and living under the shadow of the gallows. Aside from Lanchester, Marlene Dietrich is the only person on screen with enough gravitas to pull focus away from Laughton for any stretch of time. She is nearly flawless as the icy German refugee, aging but still coldly beautiful. The great Una O’Connor shows up as the murdered woman’s domestic (her final film role), and she’s always a treat when she’s on the screen, never more here than when she sits in the witness box.

There are a few downsides here, one serious and one not so much. We get a couple of flashback sequences when Leonard Vole talks about the past. These are fine, but when he talks about meeting Christine for the first time, we get a sequence straight out of a romantic comedy. More than that, we’re subjected to Marlene Dietrich singing. I have no real issue with Dietrich as an actress—she’s often worth watching. However, a big part of her appeal back in the day was her singing, though, and I don’t get it. She always sounds flat to me and never quite gets her r’s pronounced correctly—the spoof of her in Blazing Saddles is near-perfect, but that is played for laughs. Here it’s not, and it’s a painful couple of minutes.

The much bigger issue is the ending. What happens in the last few minutes strains credibility. Oh, I suppose it’s within the bounds of possibilities, but it’s such an odd turn that I admit my bullshit detector went off. I can accept it, but only grudgingly.

That more than anything pulls the film off the list of my favorite films from Billy Wilder. It doesn’t get to the level of a Sunset Blvd., Double Indemnity, or Lost Weekend. But Laughton here turns in one of my favorite performances in a Wilder film and I have new respect for just how great Elsa Lanchester could be with the right material. This is a fun film and worth watching. Go in knowing that when you’re watching Laughton, you’re watching the prototype for curmudgeonly geniuses in film and television for the next 50 years.

Why to watch Witness for the Prosecution: Charles Laughton and a solid crime plot.
Why not to watch: An ending that doesn’t quite match the quality of the first 90 or so minutes.

Posted by SJHoneywell at 7:02 AM