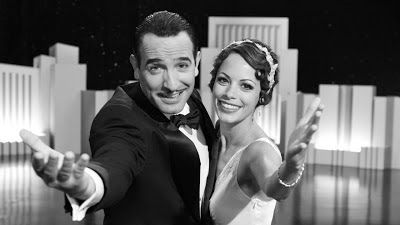 Wow. Really, just wow. I heard all of the hype for The Artist, of course; it would be pretty much impossible not to have heard something of it last year and at the start of this year. It was the darling of film people for a couple of solid months, and even as someone who hadn’t seen it until tonight, it was not a surprise when it walked away from the Oscars with a fistful of statues. According to its IMDB page, in addition to its five Oscars, The Artist has received another 109 awards of various sorts and types. Yeah, that’s a lot.

What I expected, of course, was a silent movie, but it’s not precisely that. Instead, it is a modern film that happens to be silent for the bulk of its running time. The difference here is really all the difference. Except when it actually makes sense within the narrative, there’s no painful mugging to the camera or overacting of the sort common to 100-year-old films. It is a film for now that pays homage to these classics and a few others besides. There are definite shades of Sunset Blvd. here and more than a smattering of Singin’ in the Rain.

George Valentin (Jean Dujardin) is a silent movie star at the top of his career. After the premiere of his latest film he bumps into a young woman named Peppy Miller (Berenice Bejo), who kisses him. The next day, she’s on the front page of the newspaper, which causes a problem for George with his wife, Doris (Penelope Anne Miller). Peppy wants to get into the movies, and she gets a bit part in one of George’s films at his insistence. The two of them have some spark between them, and he tells her that she needs to be different if she’s going to make it. He draws a beauty mark on her just above her lip.

This seems to be a turning point for both characters. Peppy becomes a rising star in films while George more or less holds his place until talkies arrive. When they do, his studio boss (John Goodman) tells him that they will make talkies exclusively. George, convinced that talkies are a fad, goes off to create his own film while Peppy gets a major break as the star of a talking picture. As it turns out, the two are released on the same day, coincidentally around the time of the massive stock market crashed that heralded the Great Depression. George’s film, a silent romantic tragedy, is a huge flop. Peppy’s film is a massive hit. Around this same time, Doris kicks George out of the house.

The two stars—one rising and one falling—continue on this trajectory. George is forced to pawn and auction all of his effects to survive and is eventually forced to fire his servant/chauffeur Clifton (James Cromwell). Eventually, so fed up with what his life has become, he sets fire to all of his celluloid films, only to be rescue, turning up in Peppy’s house. The final act is worth leaving untouched by summary, so I won’t do it here. It’s better to experience where this film goes on its own.

The Artist is, and I say this without hyperbole, a beautifully made and realized film. It would have been easy to create this as something of a spoof or a gimmick. Well, it is sort of gimmicky, but it works perfectly. After a few minutes, I stopped thinking of this as a silent film and saw it instead as just a marvelously made film.

One of the best sequences comes just after George discovers the reality of sound film. We get a sequence where sound suddenly appears in the film. Everything George touches makes noise, and we can tell immediately that this is different for him. It reminded me very much of moments in Pleasantville when people remark that items have color—they always had color to them, but now it’s somehow different. George, though, cannot make any noise. He runs outside and hears laughter—a group of dancers appear and the group continues to grow larger and larger, all laughing at his inability to speak. Then, of course, he wakes up. But, naturally, his dream is prophetic—he refuses to speak in the movies, and it works to his disadvantage. This is followed by a confrontation between George and Doris, with her saying to him “Why won’t you talk?” It’s immediately evident that this question is both about their current argument and his refusal to speak in films. In fact, the first title card is George in one of his films refusing to speak while being tortured.

I should mention Jack the dog, played by a little Jack Russell Terrier named Uggie. He’s George’s dog in the film, and he appears in all of George’s movies with him. Uggie is a treasure, a great addition to the film, mostly because he’s beautifully trained and cute as all hell.

I could, if I wanted to, go on and on about this. I won’t bore you with it, because gushing praise isn’t that much fun to read. But gush I could, and gush I want to. If you’ve seen this, you know what I mean. If you haven’t, you should go watch this, because it’s really just wonderful.

Why to watch The Artist: It’s fantastic!
Why not to watch: You don’t think you can handle a film that has no dialogue for 90 minutes.