Seeing a Man About a Horse

About a year ago, an anonymous commenter told me on this blog that if I couldn’t understand art films and didn’t want to dedicate myself to truly learning about (in the case of The Color of Pomegranates) the Armenian surrealist tradition that I would be better off sticking to Spielberg. That’s an odd quantum level above typical trolling; normally, I’d be told to drool over the latest Michael Bay film. I like Spielberg sometimes. At the very least he has the potential to make a great film whenever he sets out to make one. Sure, sometimes you get 1941, but sometimes you get Raiders of the Lost Ark. I’ll always give him a chance. 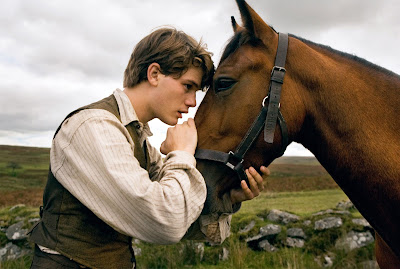 That said, I knew going in to War Horse that I was setting myself up for Spielberg’s favorite movie pastime—black belt-level emotional manipulation. Spielberg has never seen an emotional moment he couldn’t milk nor has he come across an honest moment of real emotion he couldn’t play for that last tug of the heartstrings or slowly falling tear. The problem with being as emotionally manipulative as Spielberg can be is that I’m aware of it, and because of that, I’m on my guard against it. Any time there’s a Dickensian-style coincidence or a particular swelling of music, my heart hardens. I know what’s coming because I know he flat-out can’t resist going there.

So, anyway, War Horse. This is the story of a horse named Joey who starts on a farm. Joey is a thoroughbred and thus not really suited for farm work, but because this is not just a movie but a Spielberg movie, we’re going to discover that Joey can really work the shit outta that farm thanks to his training by Albert Narracott (Jeremy Irvine), who teaches him to come at the sound of an owl hooting. Joey can do what no other horse could do. He can plow up a field full of stones and make it ready for planting. In fact, in one moment of the plowing (with appropriately dramatic thunder, lightning, and downpour), the plow sheers right through a rock. Frankly, I think that says more about the plow than the horse pulling it.

Anyway, tragedy strikes and the family, having spent too much to acquire Joey in the first place, is forced to sell him to a soldier preparing to head off to the first World War. Once again, despite not being the sort of horse that should be rockin’ it out on the battlefield, Joey shows his worth in training. Once we get to the war itself, his new owner James Nicholls (Tom Hiddleston) is quickly killed off, leaving Joey to be captured by the Germans. The Germans in charge of the horses are a pair of brothers who decide to leave the war and hide out in a windmill. They’re eventually discovered and executed (‘cause, y’know, Germans in a Spielberg movie), and Joey and his friend Other Horse (I’m sure it had a name, but I can’t really bother to care) are discovered the next morning by a French orphan named Emilie (Celine Buckens).

Emilie lives with her grandfather (Niels Arestrup). It is revealed that Emilie is fragile and has easily broken bones and thus can’t ride, but naturally, since these are magic horses, her grandfather gives her a saddle and she rides off only to have the horses confiscated by the Germans once again, this time in charge of pulling cannons.

Eventually, Other Horse dies and Joey breaks free, running into no man’s land where he becomes snared on barbed wire. This leads to a combined British/German rescue of the horse, and by coin flip, Joey returns to the British side. Meanwhile, our friend Albert from the beginning (Joey’s original trainer) has entered the war and has been temporarily blinded in a gas attack. When he hears about this miracle horse from no man’s land, he instantly realizes it can only be Joey the Horse and calls to him just as Joey is about to be put down for likely getting tetanus from the barbed wire. So man and horse are reunited, but when the war ends, only the horses of officers will be given transport back to England, leading to the heart-tugging conclusion.

I realize that I’m giving this short shrift, but I feel like it’s all that it’s worth. While certainly a well-made film (Spielberg, after all), it is needlessly maudlin and melodramatic. Spielberg has always been all about this sort of real-world magic, these massive coincidences that lead people to believe in some sort of magic in the world beyond them and guiding those special few touched by this magic to have lives of marvel and great serendipity.

I’m frankly pretty bored by it. Knowing this was Spielberg, I had no doubt that Albert and Joey would be reunited in the end. Spielberg heroes always accomplish everything they set out to do and always beat whatever the longest odds are. Good old Steven is a better filmmaker when he opts more for verisimilitude instead of sentiment. His sentimentality is too blatant, too obvious, and too planned to be anything like a surprise. Even when tackling larger subjects like Saving Private Ryan or Schindler’s List, he still delves into the sentimental and still goes for that melodramatic tug on the heart. Sometimes he does this very, very well. In War Horse, these moments seem so telegraphed that there’s never a surprise.

Final analysis? War Horse is a well-made, large budget fable of soap opera proportions. Anyone who managed to be caught up in its sentimentality ought to be rightfully ashamed of him- or herself.

Why to watch War Horse: Classic Spielberg
Why not to watch: It’s as manipulative emotionally as any Spielberg ever, and more so than most.