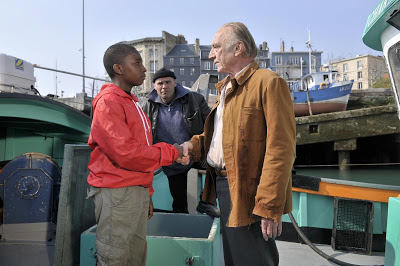 Up to this point, my one and only dealing with director Aki Kaurismaki was the strangely emotionless Ariel a couple of years ago. I didn’t hate that film, but I had a difficult time understanding what it was all about. I mean, I got the plot; I just didn’t understand why no one in the film expressed any emotion. Now with Le Havre, I’m seeing this as indicative of Kaurismaki’s style, because there’s not much in the way of facial expression in this film, either.

This is the story of Marcel Marx (Andre Wilms), a former bohemian author who was mildly successful back in the day. In the present day of the film, he has given up all of his artistic goals and pretensions and now makes a living shining shoes wherever he can—train stations, in front of stores, and down by the docks in the port city of Le Havre. One night a cargo container filled with illegals from somewhere in Africa. While they are being attended by the Red Cross, a young man named Idrissa (Blondin Miguel) walks out of the shipping container and runs away into the city.

Of course, the whole film turns on the fact that the boy ends up with Marcel. It’s a tricky time for Marcel, because just as the boy shows up in his life, Marcel’s wife Arletty (Katy Outinen) collapses from what is evidently a terminal cancer. She spends the bulk of the film in the hospital, slowly withering away and avoiding letting her husband know precisely how sick she is. We cut back and forth between these two stories throughout. In the one, Marcel attempts to keep Idrissa from the prying eyes of immigration, enlisting the support of his neighborhood to keep the boy safe. In the other, he frets over his wife, who is dying by inches.

Idrissa’s goal is to get to London where his mother is. Marcel visits the boy’s grandfather, who has been detained. He also makes plans to get the boy to England across the English Channel. While his acquaintances help out, providing food and an occasional place for Idrissa to stay, they suddenly decide that the boy will be their cause, and that they will help financially. The cost to get Idrissa over the Channel is 3,000 euros, a huge sum for a shoeshiner, and so again, the neighbors jump in to assist as they can. The issue thus is not the boy himself, but raising the cash to get him out of France and to keep him out from detection of a police inspector (Jean-Pierra Darroussin) looking to catch him and have him deported. Eventually the decision is made to hold a charity concert to raise the money, all of this being done under the inspector’s nose.

Le Havre is a film filled with heart, but that should be obvious from the plot. A group of people acting in the best interests of a young refugee could hardly be anything but the sort of thing designed to tug the heartstrings. All of the people in the film are genuinely decent and are very easy to care about and hope to see successful at the end.

However, once again in a Kaurismaki film, facial expressions are a thing as rare as hen’s teeth. Everyone deals with every issue they confront with a sort of bland stoicism that is difficult for me to parse. In fact, most of the facial expressions come from the more secondary characters. Marcel, Arletty, and Idrissa all look as neutral as mug shots for virtually the entire running time. It’s such an odd directorial choice, but having seen this now in two separate films from Kaurismaki, I can’t help but think that this must be something of his defining style—someone with more experience with Kaurismaki, please let me know.

Ultimately, Le Havre is entertaining and uplifting, an enjoyable film that in the past would have been called a triumph of the human spirit. The ending is an interesting one, and can be interpreted in more than one way—a touch of magical realism, a spiritual ending, or a miracle depending on how you decide to view it. In any respect, I enjoyed this film, but am not entirely sure why I couldn’t die until I saw it.

Why to watch Le Havre: An interesting and unusual story.
Why not to watch: Once again, people in Kaurismaki’s films don’t have facial expressions.