Film Within a Film

Just as there are dozens of musicals that are essentially about musicals, there are plenty of films in the world about films, filmmakers, and the filmmaking process. For me, this is a much more interesting topic. I mean, most musicals about musicals are about the necessary pluck and determination needed to put on a show at any cost, and basically indicate that those people who are show people (and who thus smile when they are low) are particularly special and wonderful. Filmmakers might well do this, too, but they don’t seem to do it exclusively. Frequently, films about film are filled not with unashamed promotion of directors as saints, but frequently as people just as confused and lost as anyone else. 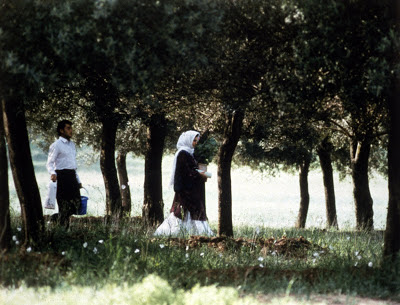 Zire Darakhatan Zeyton (Through the Olive Trees) is a film deeply connected to the idea that life and art blend into each other and overlap, often becoming confused, one for the other. I had thought that Kiarostami’s Close-Up was the most convolutedly meta film I had ever seen, but that’s only because I had not yet seen this one. This is the final film in his “Koker” trilogy. The first film, Where is the Friend’s Home?, is a treatise on civic duty and friendship. The second film, Life, and Nothing More concerns Kiarostami searching for the stars of the first film after a massive, destructive earthquake, putting a layer of meta onto the first film. This one is essentially about the filming of the second film, which is about the first film, making a meta parfait of Iranian film goodness.

What this means is that actors in this film are essentially playing actors in another film. We see the director of the film within the film (Mohamad Ali Keshavarz) interviewing a large group of young women, looking for his star. He eventually decides on one, a young woman named Tahereh (Tahereh Ladanian), who was orphaned by the recent earthquake. Her co-star is Hossein (Hossein Rezai), a former stonemason. In life outside of the film, Hossein has asked Tahereh to marry him. This has offended her family because he is poor and illiterate and does not have his own house. He continues to press his suit, though, hoping to convince her to go against the wishes of her grandmother.

This becomes a standing problem as it appears that both Tehereh and Hossein are having difficulties separating their reality from the film, in which they are a recently-married couple. Both frequently muff lines or slip between the reality of the film and the reality they experienced. Hossein, for instance, is supposed to say that he lost 65 family members, but keeps saying 25 because that is the number he really lost in his family. Initially, Tahereh refuses even to speak with him, and doesn’t speak with him unless the film within the film is being shot.

A great deal of Zire Darakhatan Zeyton concerns the role of the director and his relationships with the actors, his crew, and the interested parties in the town. By far, he and his assistant, Mrs. Shiva ( Zarifeh Shiva) are the most engaging and interesting characters here. The director seems like such a nice guy. He gets involved in the personal lives of his stars and wants nothing more than to successfully bring off the relationship so that his own film can continue.

The biggest issue with this film comes in the role of Tahereh. In the U.S., she doesn’t appear to show any interesting in Hossein, although this is not apparent to American audiences because of cultural differences. Evidently, the interest is there all along, we are simply too culturally blindered to realize it. This knowledge makes the ending, in which Hossein pursues Tahereh through the eponymous grove of trees that much more poignant, particularly because we never hear her answer to his repeated pleas.

Zire Darakhaton Zeyton is frustrating in this respect, not because it is a poorly made film, but because it is one that requires some knowledge of Iranian culture to fully understand. It is also deeply personal and complex because of the relationship between the lives inside the film and the lives inside the film within the film so deeply, essentially comparing both art and life and frequently coming out with the two as equivalent. Thus, it is a film for Western audiences that requires some study to fully comprehend. This makes it a tough sell, but it’s a beautiful and rewarding film worth this extra effort. 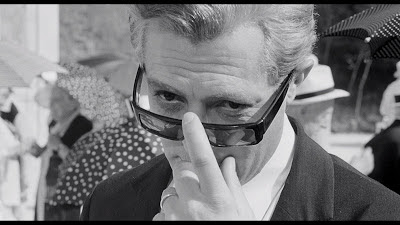 Fellini’s 8 ½ explores this same ground of the connection between life and art, art and life, but comes at it from a completely different perspective. Rather than focusing on the connection between the life and art of the players, it explores the blurring of reality experienced by a director hounded by this life into producing another film. The title comes from Fellini’s own life—up to this point, he had made six features, two shorts, and another half of a film, making this project number 8 ½.

The central problem of the film is that our director within the film, Guido Anselmi (Marcello Mastroianni) doesn’t know what to do. Everyone he needs to help him produce the film he wants is there, a complete cast, his producer, his assistants, and everyone else. All of this is fine and good. The problem is that he has no idea what he wants to say or what he wants to do. The film he is creating is ostensibly science fiction, but he has no central idea, no plot, no theme, no nothing.

While he tries to push everyone back and pretends to manufacture something for the film to be about, he is either cursed or blessed with a series of dreams, visions, and reveries in which he fantasizes about his life, his past, and what seems more or less to be his ideal situation. In the real world, he is plagued by his mistress Carla (Sandra Milo), his wife Luisa (Anouk Aimee), Claudia (Claudia Cardinale) who is his ideal leading woman, and several other women in and around his life. His friend Mezzabotta (Mario Pisu) is in the area with his mistress, soon to be his wife when his annulment goes through, and there is evidently some attraction between Guido and Gloria (Barbara Steele) despite her betrothal to his friend.

Much of 8 ½ deals with his inability to make a decision on what he is doing as well as his frequent failed attempts at relationships with women. In truth, most of the women here are depicted as vacuous and bubble-headed, none less so than Carla, who is little more than a pretty face in mink, concerned mainly with her appearance and nightlife. The notable exception to this rule is Luisa, who seems in many ways like the most real woman in the film, or at least the most fully-developed as a person. However, Guido’s inability to remain faithful or curb his extracurriculars damns this relationship as well.

Like many of Fellini’s other works, 8 ½ is highly autobiographical. One gets the sense that much of what happens on screen is similar to what Fellini may have really be going through. It is most intereting when the blending of film reality and film fantasy become completely blurred, creating a situation in which we are present both in the fantasy and the reality at the same time. This naturally also makes the film difficult to follow at times, because it is impossible for us to get a firm grasp on precisely where we are in terms of the narrative and in terms of what is going on inside Guido’s head.

The result is a film that is simultaneously important and feels like fluff, deep and meaningful and equally impenetrable. It’s a difficult film to completely parse and almost requires repeat viewings to have even a chance at understanding it fully (a situation I find myself in again after watching Gabbeh recently). I am fully confident that I have not grasped anything close to everything there is to see here.

Ultimately, though, I don’t love Fellini. I find him frequently opaque and always far too self-indulgent to really have more to say than, “Look at me!” I liked this better than about half of what I have seen of his filmography and less than the rest. It lands firmly in the middle of Fellini’s oeuvre, which I often find difficult to understand. 8 ½ is evidently his cinematic masterpiece, but I love it less and like it less than I’d hoped.

Bluntly, films like these are difficult for me to review because they always make me feel stupid, like there's more I shoul be getting but am simply not smart enough to really understand.

Why to watch Zire Darakhatan Zeyton: The culmination of Kiarostami’s treatise on the art of film.
Why not to watch: it can get pretty naval-gazing.

Why to watch 8 ½: It is Fellini’s apotheosis.
Why not to watch: It’s not just naval-gazing, it’s Fellini-level self-indulgent.