Since it’s Halloween, I thought it would be a worthwhile exercise to watch a couple of films that I was pretty damn sure would scare me. I like horror movies in general. More accurately, I like smart horror movies, ones that don’t play to the lowest common denominator. Stupid horror movies don’t really do anything for me. I’m not scared when I know what’s going to happen, or when the victim in the film is dumb enough to walk into something obvious. So the films of today are interesting in the sense that in both cases, I know where the film is going. I’ve had access to both films for months. But I haven’t watched them because where they go freaks me out a bit (or a lot). 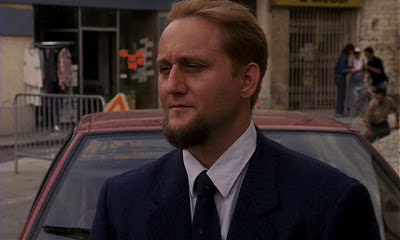 Spoorloos (The Vanishing) is the first of these. I admit right now that I am something of a claustrophobe. I don’t mind small places like elevators, but I have an intense fear of being physically confined or restrained. That comes into play in Spoorloos, and I knew that going in. What I dreaded more than anything was that ending I knew was coming. What I didn’t understand was how what was essentially a simple story could be expanded into something that lasted close to two hours.

Rex Hofman (Gene Bervoets) and his girlfriend Saskia Wagter (Johanna ter Steege) are off on a trip together. After a fight, they stop at a gas station to fill up their car. Saskia goes into the gas station to use the restroom and buy a couple of drinks…and she never returns. She vanishes, as per the title. Rex, naturally, is frantic about what has happened. Three years later, he is still looking for her. His obsession with finding out what has happened to Saskia destroys his new relationship with Lieneke (Gwen Eckhaus). Eventually, he is contacted by a man named Raymond Lemorne (Bernard-Pierre Donnadieu) who tells him that he knows what has happened to Saskia.

The film solves the problem of the audience becoming bored with Rex’s search by instead concentrating in the main on Raymond. We learn very quickly that he has done something terrible to Saskia, because we see him over and over attempting to entice women into his car. As the film progresses, we learn his entire story. He believes there is something lacking within him, some basic resistance to things. As a young man, he leapt off a balcony because he determined that most people don’t jump. We also learn of a time when he rescued a young girl from drowning. This act of heroism caused him to wonder if he could do something truly despicable, which led directly to his refining his ability to get women into his car and thus kidnap them.

Ultimately, Rex demands to find out precisely what happened to Saskia. Raymond obliges him by basically doing the same thing to him. I won’t reveal it here (I had this spoiled for me, which is what led me to be so terrified of this film in the first place). Suffice to say that it is pretty horrifying, a genius moment of crafting a story.

What makes Spoorloos truly terrible is ultimately not the twin fates of Saskia and Rex, but the identity of the man responsible for those fates. It’s repeatedly shown to us that Raymond is essentially a completely normal guy. He has a wife and two kids and a responsible job. He just happens to be a self-admitted sociopath who wants to see if he is capable of doing something truly terrible. It is his essential normality, the fact that you wouldn’t look at him twice (except for his rockin’ Abraham Lincoln-style beard), that makes him so terrifying. It only reinforces the idea that the truly dangerously insane don’t necessarily call attention to themselves.

I won’t kid, though. The ending is tough. I don’t mean that as a complaint or a criticism, but it was very difficult for me to watch. I even knew what was coming, and it didn’t help at all. I say this only to warn other people who might have the same issues I do.

Spoorloos is a film that really does manage to bring the creeps. While not specifically a horror movie, it certainly doesn’t shy away from going to places that are uncomfortable to say the least. The entire story is designed to put the audience in the same position as Rex—we need to know what has happened to Saskia no matter the cost only to discover that the cost is far too high. If anything, George Sluizer should have stopped while he was ahead; he remade this film in the U.S. and changed the ending, which is really the reason this film works as well as it does in the first place. 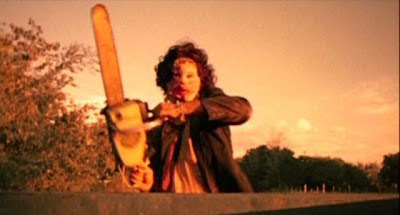 The Texas Chainsaw Massacre is, without question, a horror movie; there’s no dancing around on the genre for this one. The entire point of this movie is to freak out the audience as much as possible for pretty much the entire running time. It was made on a nothing budget—under $100,000—but really has no special effects. What it does is almost everything right from creating an atmosphere of terror to really bringing the scares.

A lot of this film really is effective. First, there’s almost no plot so that we can concentrate on the horrible stuff. Essentially, a group of five kids hear about some grave robbing incidents near where the grandfather of two of them is buried. They go to investigate, pick up a weird hitchhiker, and then go take a look at the grandfather’s old house. What they don’t realize is that a family of halfwit cannibals has taken up in the house, and the teens are killed off one by one until there is just one remaining victim. That’s pretty much it.

So let’s talk about what’s done right here. The fact that a great deal of the film takes place in the daytime seems like something minor, but it’s truly effective. Typically, horror films take place at night when things seem to come out to scare us. With everything happening in the day, we get a good look at what is going on around us. There’s no place to hide, because it’s bright out. There’s a sense in films that the really bad stuff only happens at night, but this film tells us differently, and does so in the most effective way possible—by scaring the crap out of the audience.

Second, the film quality is grainy throughout, which lends not a sense of low budget in this case (although it does lend that, too), but a sense of authenticity. There is something far more real about the cannibal clan on this grainy film stock than they would be in perfect Technicolor. In many ways, it feels almost like a found-footage film, although it most definitely is not one. The performances manage to exploit that gritty feel and similarly feel more authentic as well.

The soundtrack deserves a mention here, too. It is not really music, but instead relies on animal noises and industrial sounds, essentially putting us constantly inside a slaughterhouse for the duration. This is not very subtle, but it is extremely powerful and disturbing. Just as there is no place to hide when horror happens in the middle of the day, there is no relief to be had from the soundtrack or anywhere else.

This isn’t a perfect film by any stretch, of course. One of the major downsides of The Texas Chainsaw Massacre is that the plot unfolds in large part because the five teens in the van are pretty stupid. They basically walk one at a time into the house and are killed off one at a time. I’ll give Kirk (William Vail) a pass on this as the first victim, but after him, they simply wander into the house like brain damaged lemmings and serve themselves up to Leatherface (Gunnar Hansen). It’s also worth mentioning that the character Franklin (Paul A. Partain) is an annoying bastard. He’s in a wheelchair which should give him some sympathy, but he burns through that almost immediately by being incredibly whiny. Suffice it to say that when Leatherface gets Franklin in his sites…you’re not going to be too terribly upset.

What ultimately makes this film work, though, is the brutality of the killings. There is no fanfare for any of them—they simply happen out of nowhere and are completely awful. To coin a phrase, they are the sort of shocking, brutal horror that causes the audience not to turn away, but to cover up its collective mouth to stifle a scream. There’s no artistry, just pure, immediate death in the most unpleasant ways possible.

So yeah, I get it. The Texas Chainsaw Massacre is scary because it taps into that lizard brain part of our psyche that doesn’t think but can only react in fear, pain, and anger. For all its low budget and issues, it hits there, and it hits there hard.

Why to watch Spoorloos: A terrible mystery that requires solving.
Why not to watch: George Sluizer ruined this film’s reputation by remaking it in English and screwing up the ending.

Why to watch The Texas Chainsaw Massacre: It’s a true classic for a reason.
Why not to watch: Eating meat will never be the same again.