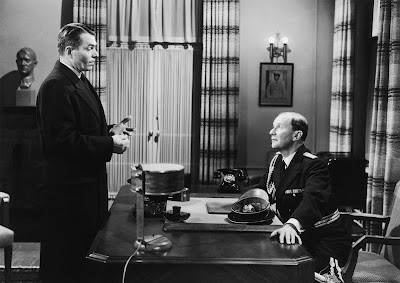 Everyone has an actor or two that he or she loves and will always watch. Barbara Stanwyck is one of mine. James Mason is another. When I saw that Hulu was losing the rights to Mason’s 5 Fingers, I knew it was time to watch. Even if I didn’t love the movie, I knew I’d appreciate Mason, and I was right in that opinion. Of course, it helps that the film was good enough for a couple of Oscar nods, but it’s really all about James Mason for me, with Michael Rennie as an added bonus.

The opening moments of the film suggest that what we are about to see is a true story of espionage from World War II, and as far as I know, this is the truth. Like many a good story of spying during wartime, this film takes place not in one of the belligerent nations, but on neutral territory, Turkey, in this case. Since declaring itself neutral in the conflict, both Axis and Allied powers maintain embassies, and there is a great deal of maneuvering around the idea of getting aid both official and unofficial from the Turkish government.

One of the main figures in this narrative is Countess Anna Staviska (Danielle Darrieux), a Polish expatriate forced into neutral Turkey because of the German invasion. While she has been pro-Allies in no small part because of the destruction wrought on her country by the German invasion, she is also at the end of her financial rope. She indicates to German ambassador Fritz von Papen (John Wengraf) that she might be willing to work for the Axis as a spy since she has connections everywhere. The ambassador demurs.

Around this same time, Ulysses Diello (James Mason), the valet of the British ambassador (Walter Hampden) approaches German attaché Moyzisch (Oskar Karlweis) with two rolls of undeveloped film. He claims that the rolls contain photographs of documents classified as Most Secret, and that he’ll happily sell them for 20,000 pounds. There’s a great deal of hemming and hawing over the price, but eventually the Germans pony up, and thus is born a relationship. Every week, Diello shows up with a roll of film of whatever has passed through the ambassador’s safe and walks away with another pocketful of cash. He is given the code name “Cicero.”

To avoid suspicion, Diello approaches Countess Staviska. He once worked for her husband, so he knows her and knows well what makes her tick. Essentially, he uses part of his growing fortune to put her up in a better class of living arrangements in exchange for the use of her quarters when he needs them to transact business. There is also a great deal of sexual tension between the two of them, and indication that he is very much infatuated with her and that she is willing to give herself to him in exchange for being kept in the style to which she had always been accustomed. Diello’s goal is to amass 200,000 pounds and emigrate to Rio, posing as an Argentine national, and he agrees to take her with him.

But just as his plans seem ready to come to fruition, trouble appears. The British seem suddenly aware that someone is leaking information to the enemy, and Colin Travers (Michael Rennie) arrives in Turkey to see what he can learn. This coincides with the arrival of the plans for Operation Overlord, the Allied invasion of the European mainland. Naturally, German Intelligence wants a close look at those plans, and is willing to pay far more than Diello’s going rate. But with changes in security and problems accessing the ambassador’s safe, it becomes a question of Diello’s future and potentially the future of the war and of Europe.

5 Fingers is one of those films with a sort of guaranteed outcome, but that is able to make this work anyway. The last half hour of the film in particular is surprisingly tense, even when the general tenor of what happens is already known. Diello’s move to open the safe one last time is a tremendous sequence of events, and causes a real conundrum for the viewer. There’s absolutely no question that Diello is a bastard and is happily selling out the Allies; despite his British accent, he is actually Albanian and so has no real loyalties. Despite this, there is a real tension in whether or not he will be successful in photographing the plans. It’s not too much of a stretch to suggest that for many viewers, despite what is at stake, there’s even a small sense of wanting him to succeed.

The first hour or so of the film is a bit slow, though. It’s not quite a drawing room drama, but it moves at an almost tentative pace in places. This may well be the nature of espionage, but not a great deal happens except for the transfer of film and funds and a great deal of posturing on both sides. Additionally, we get a little inconsistently timed voiceover narration, which is there no doubt to move past even slower points in the plot. It works, but still seems out of place.

In the end, though, it’s all worth it. All of the posturing and slow chess moves of the start come together at the end in something that goes through any number of changes and twists in the third act. It’s a great third act, when everyone seems to be constantly one step behind everyone else—everyone (with one or two exceptions) always seems to be on the losing end. By the time the film comes to its excellent conclusion, we see that the reality is not even that; everyone loses to some extent here. There are no real winners in this game, although the British Foreign Office does seem to come out in the best shape. That only makes sense from a film made about this war in the years immediately following by one of the Allied powers.

5 Fingers is in no sense a bad film, but it’s hampered by its slow beginning. The climax is good, as are the smaller climaxes after it, but getting to that point is a little slow. This is not must-viewing for anyone but the most obsessive of James Mason completists or espionage aficionados. Everyone else can skip it with some impunity.

Why to watch 5 Fingers: Cool espionage and the awesomeness that is James Mason
Why not to watch: In the world of espionage films, there might be a reason more people don’t know it.

Posted by SJHoneywell at 8:44 PM