I Get Knocked Down, but I Get Up Again 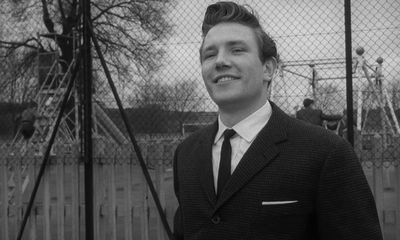 I love going into a film cold. Truth be told here, before I popped in the tape of Saturday Night and Sunday Morning, I couldn’t have told you anything about it. In fact, I was mildly surprised that the film was in English; for whatever reason, I expected it to be German or Scandinavian. That changed the minute I heard a broad East Midlands accent.

There are no surprises as to the type of person Arthur Seaton (Albert Finney) is when we are first introduced to him. We see him working on a factory line counting out his piecework, hoping to get to his quota of 1000 pieces so he can knock off for the weekend. He tells us that he could easily get his work done in half the time allotted to him, but that this would mean his employers could cut his pay, and he refuses to let that happen. Arthur loves a good time more than anything. His days during the week are there to mark the time until Friday night. He gives his mother a bit of his pay as room and board and then spends the rest on booze and women. In particular, he spends money on Brenda (Rachel Roberts), the wife of his co-worker Jack (Bryan Pringle). Arthur has complete contempt for anyone who wants to get ahead, anyone married, anyone who doesn’t spend his time drinking and womanizing, and is in particular disgusted with Robboe (Robert Cawdron), his boss.

This is the life that we are given to watch as the film progresses, and naturally the bulk of the time is spent with Arthur on the weekends. He demonstrates an ability to drink incredible amounts of beer and otherwise acts as rudely as possible to everyone around him. He spills beer on the patrons of the pubs he frequents and sometimes gets too drunk to successfully navigate a staircase. On Sundays, he goes fishing with his friend Bert (Norman Rossington).

Two events change Arthur’s life dramatically. The first is that Brenda becomes pregnant, and she is sure that the child is Arthur’s. They try several different methods of aborting the pregnancy, but eventually, Brenda determines to keep the child and damn the consequences. The other event is the arrival of Doreen (Shirley Anne Field), a pretty young woman who immediately attracts Arthur’s attention. As he splits time between the two women, He starts to find these two worlds of his closing in and threatening to collide.

Essentially, the entire point of the film is that everything Arthur does on Saturday night is something that he is forced to pay for on Sunday morning, at least metaphorically speaking. Everything he does has its cost, and as the film continues to play out, the cost of these Saturday night events goes up and up. The question is never whether or not Arthur will continue to create this sort of metaphysical/existential debt, but whether or not he’ll be able to pay up at the end.

Saturday Night and Sunday Morning is anchored by the performance of Albert Finney, who is simultaneously charming, destructive, and rampantly sexual. We get a little bit of voiceover work from him at the start and some again at the end. The voiceover work is excellent, and the film could have stood more of it. I didn’t miss it when it was gone, but it was so useful and well done when it showed up, that I missed it retroactively. Shirley Anne Field is certainly a pretty face, but that’s about all she is here. She has had a surprisingly long career for someone who is so otherwise bland in this film. Rachel Roberts is not nearly as physically attractive, but is far more compelling a character and far more interesting. It’s also worth noting the presence of Norman Rossington, who I had previously seen only as the manager of The Beatles in A Hard Day’s Night (he’s the one Lennon frequently calls a swine). Rossington works here because he looks like an everyday guy and not someone who specifically belongs in a film. It’s a good performance as a sort of lesser version of Arthur; he’s less attractive, less wild, and less interesting, but still important to the narrative.

The strangest connection I make here is with A Clockwork Orange, and in this case, I’m referring to the book and not Kubrick’s film. Kubrick didn’t include the 21st chapter, but the end of this film strongly resembles it. In fact, Saturday Night and Sunday Morning follows much the same trajectory, with Arthur’s wild days starting to become too high priced for them to continue as they have been. We’re left with either the possibility of him going too far or him settling down. Those who have read the complete version of Burgess’s book will be able to deduce what happens here.

Why to watch Saturday Night and Sunday Morning: Evidence that Albert Finney is better than his reputation
Why not to watch: The ending is strange, and seems a bit tacked on based on the story.

Posted by SJHoneywell at 8:40 PM