He's the Hairy-Handed Gent Who Ran Amok in Kent

Film: An American Werewolf in London
Format: VHS from personal collection on big ol’ television and streaming video from NetFlix on laptop. 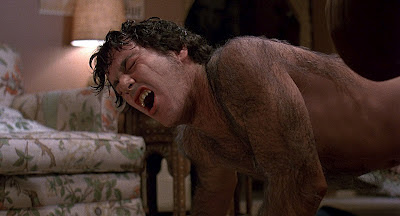 Certain sub-genres of film get tired. The death knell has been signaled for Westerns more than once, and yet they still show up and some of them are still good. Werewolf movies had a bad reputation for years as low-grade b-movies out for cheap shocks and crappy special effects. In fact, I challenge anyone to name a good werewolf film between the release of The Wolf Man in 1941 and 1980. All of that changed in 1981 with the release of two really good werewolf movies: The Howling and today’s cinematic masterpiece (a term I try not to bandy about lightly), An American Werewolf in London.

According to legend, John Landis got the idea for this film while working on the set of Kelly’s Heroes when he witnessed a gypsy burial. The burial involved putting the corpse into a very deep grave feet first and wrapped in garlic. This was intended to prevent the body from rising again. Landis’s essential starting point was, “but what if it did?” Obviously, that basic premise mutated quite a bit to give us a werewolf picture, but there is a sort of genetic connection here between the idea of a risen corpse and the violent and funny werewolf movie that was actually created.

American tourists Jack (Griffin Dunne) and David (David Naughton) are backpacking their way through northern England when they stumble upon a creepy tavern with a pentangle inscribed on the wall. The locals don’t talk about it much and the boys leave after being warned to beware of the moon and stick to the road instead of crossing the moors. Of course, they don’t and of course, they pay the price for this. Jack is killed by what appears to be a wolf and David is injured. He wakes up a few weeks later in a London hospital, trying to piece together what has happened. The official story is that he was attacked by a lunatic, but David is sure it was a wolf. And that’s when the fun starts.

David immediately starts having disturbing dreams of running through the forest, killing animals and eating them, and of violent confrontations. More troubling are the visits from the now-dead Jack, who shows up initially in his just-attacked, gory glory and molders over the course of the film. Jack, with gobbets of flesh hanging from his face, tells David that they were attacked by a werewolf. Since he died unnaturally, he is cursed to exist in Limbo until the werewolf’s line is broken. David, on the other hand, who was merely wounded, is cursed to continue the curse of lycanthropy. Jack tells him that he will become a werewolf at the full moon, which is approaching, considering David’s three-week stay in the hospital. Naturally enough, David thinks he’s having very lucid dreams or going insane. It’s also at this time that David starts a romance with his nurse, Alex Price (Jenny Agutter). When he’s released from the hospital the night before the full moon, she takes him home with her.

This covers essentially the first half of the film. What happens next is one of the best practical special effects transformations filmed up to that time and beyond. Of course David isn’t having lucid dreams or losing his mind—he was attacked by a werewolf and now is one himself. The initial transformation of David into werewolf is one of the great horror sequences filmed in the 1980s, and while there are places now, 30 years later, where the animatronics are evident, it’s still a really good special effect. It’s also evidence of how smart Landis can be as a filmmaker—giving us the werewolf transformation in real time and with us watching it is brutal and painful and more than anything sells us on the idea of the werewolf itself. The animatronic bits at the end with Jack are less convincing, but still fun. I’m a big fan of practical effects in horror films.

An American Werewolf in London is surprisingly gory in places, although nothing really stomach-turning. It does feel initially shocking, though, because John Landis is far better known as a comedy director, which may be a little unfair. However, there is a good amount of comedy here—Landis is again smart enough to milk some situations for as much comedy potential as they contain. David waking up nude in the wolf pen of the zoo, for instance, is a wonderfully funny moment after a night of terrible rampages. Much of the comedy comes from Griffin Dunne, who is disgusting and rotting in his corpse form, but always upbeat and cheerful, telling David to kill himself to stop the curse from continuing. The humor keeps the film from getting too dark and also humanizes the characters. It’s believable that David thinks he’s just going crazy and is pursuing a relationship with the attractive Alex while all of this is happening. Instead of being completely serious, the lightness not only makes the film fun, but more believable.

Another factor that really sells this film is that David Naughton, while having matinee idol good looks, shares a significant quality with the original Wolf Man, Lon Chaney Jr. There’s an everyman quality about him and a natural tendency toward sympathy with him. David isn’t a bad guy and didn’t ask for this curse. He’s just phenomenally unlucky and was in the wrong place at the wrong time. He’s easy to like and easy to root for because he does seem like such a nice, normal guy.

This is also a classic horror movie in the sense that after the initial scare of the werewolf attack, there’s a long section with a few good jumps, but nothing really scary for some time. The transformation sequence, really the central highlight of the film, is a good hour in. But the film is never boring, and the slow progression up to that moment is as good as it gets.

I’d be remiss to not say something about the soundtrack here. All of the familiar music used has the word “moon” in the title—“Blue Moon,” “Bad Moon Rising,” “Moondance,” etc. That’s really clever and entertaining, but it’s a criminal oversight that Warren Zevon’s “Werewolves of London” was somehow excluded from this soundtrack. I mean really, that song seems so tailor-made for this film and had been out for years before the film. Yes, I realize that “moon” isn’t in the title, but that’s a pretty flimsy excuse.

Why to watch An American Werewolf in London: It’s the best werewolf film you’ll find.
Why not to watch: Seriously, no one thought to get the rights for Warren Zevon’s “Werewolves of London”?