Watching Oscar: The Lives of a Bengal Lancer 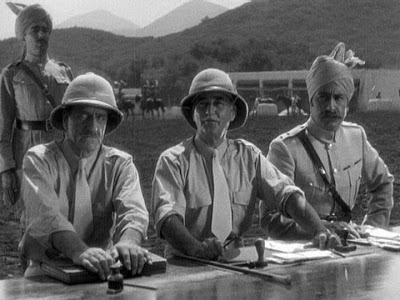 I sometimes wonder about the lives that may have been negatively affected by the Hollywood-ization of stories. Take for instance The Lives of a Bengal Lancer. This is very much in the old school tradition of the action film, featuring a trio of soldiers who take on ridiculous odds and rout the enemy with a single punch. A man doesn’t show emotion in this world, and certainly doesn’t break under pressure. I wonder how many men expected to act this way under pressure and didn’t, and thus had that added layer of guilt thrown on top of them. Of course, there’s also the possibility that several managed to hold out under duress trying to live up to this ridiculous ideal.

As the title implies, we’re deep in the heart of the British Raj for this one. The British are fighting against an insurgent named Mohammed Khan (Douglass Dumbrille, in a case of old school whitewashing), and are trying to get him to make a fatal mistake and thus capture him. The mastermind of this plan is Colonel Tom Stone (Guy Standing), the CO of the 41st Bengal Lancers. A brief skirmish backfires, and Lieutenant Alan McGregor (Gary Cooper) leads an attack against both Khan and his orders, for which he is reprimanded. It also teaches us that McGregor is a man of action.

After this skirmish, the 41st gets a couple of replacement troops. The first is Lieutenant Forsythe (Franchot Tone), who is far less by-the-book than McGregor, but just as cocky. The second is Lieutenant Donald Stone, the son of the commanding officer. Tom Stone, nicknamed “Ramrod” issues an order that there are to be no special privileges for his son, and no special attention. To that end, he basically divorces himself from his Donald, which causes a lot of resentment in the lad and eventually leads to a much larger problem.

Through a series of circumstances, the entire regiment of lancers is invited out to a pig hunt, and as it turns out, nemesis Mohammed Khan is there as well. He uses this opportunity to kidnap Donald stone, where upon Forsythe and McGregor head out to rescue him, going against Colonel Stone’s direct order. And here’s where what I was talking about at the start really comes into focus. Naturally Forsythe and McGregor are captured and naturally they are put into a room with the already captured Stone. We’re given a nice dinner sequence where the three are asked to divulge information regarding the shipment of 2 million rounds of ammunition, and naturally they refuse. Which means that of course Mohammed Khan is going to torture them.

The pre-torture scene is a good one (and this film is also apparently the source of the line “We have ways to make men talk”). The torture is the old classic—slivers of bamboo under the fingernails and then lit on fire. McGregor goes first, and endures his torture in stoic silence. Forsythe endures his torture in stoic silence. And Stone screams like a little girl (like anyone would in real life) and gives up the information. The remainder of the film is all about Stone trying to redeem himself for acting in this unmanly fashion, despite the fact that virtually anyone would have done the same thing, bullshit code of manhood or not.

But, this is the convention of the day. Equally a part of that convention is the idea that everything is played broadly. There’s the sort of overacting that only happened in the pre- and early days of the Hays Code.

Regardless, there are still moments of real genius in this film. One of the more interesting recurring moments in the film regards Colonel Stone trying to connect with his son and being too emotionally distant to do it. There are moments when he breaks away from being the soldier and becomes the father instead, and he immediately corrects himself, almost ashamed that it happened. At one point late in the film, he calls in Forsythe and McGregor to talk to them about his son and simply can’t even get the topic out. It’s obvious what he’s thinking, but too embarrassed and to necessarily emotionless to get the bat off his shoulder. It’s a great scene, and one of the reasons this film is still worth seeing.

Additionally, the battle sequence at the end is pretty good for the era. The Lives of a Bengal Lancer could have used more of it, and could have pretty much pitched the almost non-existent romance angle for a little more action, but the conventions of the day being what they were, it probably occurred to no one to do this.

As a final note, Franchot Tone provides a good deal of the humor here, playing off Gary Cooper. He comes off as annoying initially, but ultimately proves to be one of the better and more entertaining characters in the film. Lieutenant Donald Stone, on the other hand, is a whiny little jerk, even after his redemptive act.