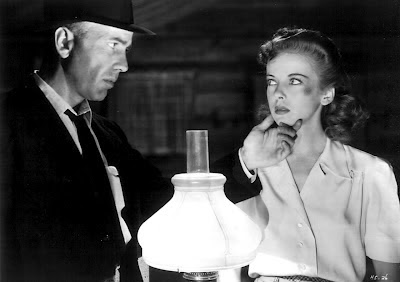 Confession time—until I actually saw the cover of the DVD case, I thought High Sierra was a Western. Really, with that title, who could blame me? It’s not a Western, of course. It’s a film noir starring Humphrey Bogart, who continues to find ways to remind me just how much I like watching him in classic films. That said, I’m not sure just how good High Sierra is when compared with other noirs that seem to have a lot more going for them. I mean, Bogart certainly counts for something, but he can’t count for everything, can he?

Criminal Roy Earle (Bogart) is given a pardon and released from prison for reasons unknown to him at first. As it turns out, a former criminal pal called Big Mac (Donald MacBride) is planning a high-stakes caper at a resort and wants Earle to run the show. The idea is that they will break into the resort and steal everything from the safety deposit boxes—lots of jewelry, mostly. The score should be big, and as an added benefit, there’s a man on the inside helping them out. Should be a cinch. So Earle drives out west from Chicago to get ready to perform the job. On the way, he befriends a family heading west. It’s an older couple (Henry Travers and Elisabeth Risdon) and their granddaughter, the attractive but partly crippled Velma (Joan Leslie). Earle takes a shine to Velma immediately and decides that he’ll do what he can to help the family and to see if he can’t get Velma’s club foot surgically repaired. Yeah, this is actually a pretty major plot point.

Anyway, Earle finally gets to where the gang is holed up, and he meets Red (Arthur Kennedy), Babe (Alan Curtis), and Marie (Ida Lupino). Marie isn’t actually a part of the team—the boys picked her up in a dime-a-dance bar in Los Angeles, and Earle doesn’t want her around. She convinces him that she can be helpful, though, and he agrees to let her stay on a trial basis. It’s evident that she is immediately smitten with Roy Earle, but that he is still mooning over Velma and thus wants nothing to do with Marie. Of course, Babe and Red fight over her constantly, and this becomes a sore spot in the heist as well.

This is film noir, so there’s really only one path that we can take from her to the end. Everyone flakes out on Roy one way or another—the one that hurts the most is Velma, who decides to get engaged to a man back east instead of to Roy. Everyone, that is, except for Marie, who has put her money on Roy Earle and is going to stick with his dance card until the end. But of course everything goes bad—the job gets screwed up, the man on the inside (Cornell Wilde) panics, and everything goes downhill. Hey, it’s film noir, and the bad guys, no matter how much we might root for them, get what society thinks they deserve.

High Sierra is an uneven film at best. It features some great performances from Bogart and Lupino, but otherwise doesn’t have a great deal to set it apart from a lot of other noirs. Actually, that’s not quite true—the entire relationship with Velma and her family is different. It’s almost a redemption for Roy Earle, but not really. He pays for Velma’s surgery out of kindness, but also because he wants to marry her, and he’s rejected. I think a case could be made that he’s not attracted to her despite the club foot but because of it. Her physical deformity makes her vulnerable and weak, something he needs to protect and take care of. When she’s cured, he discovers just how shallow and flighty she is, and he immediately turns to the rougher-edged Marie. This all works well in theory, but not as well on the screen. It plays hollow and false.

I don’t mean to sound like High Sierra is a bad film. It’s not; it’s a decent film and a decent entry into the film noir category, but it’s also not terribly memorable outside of Velma and Pard, the dog who adopts Earle and Marie early in the film. It’s more or less a standard gangster-style picture. It’s real noteworthiness comes from it being the start of Bogart’s career as a leading man instead of as a character actor. For that, it deserves a great deal of credit.

Why to watch High Sierra: Because a film starring Humphrey Bogart can’t be all bad, and this is the one that made him a leading man.
Why not to watch: Roy Earle doing good deeds doesn’t sit right.