Off Script: House on Haunted Hill; Bay of Blood

It might be coming out of an anti-intellectual closet to say this, but I tend to like the films of William Castle because they are so damn silly. Castle was the king of entertaining film promotions, having moviegoers sign waivers against the possibility of having a heart attack from fright while watching his films. It’s ballsy and fun. Seriously, there’s not a person alive today who would be so scared to be in any danger from one of Castle’s films. They’re scary sort of like Chris Kattan is funny, so, y’know, not. They also frequently have plot holes you could drive a truck through. Fortunately, they’re entertaining, and really that’s all I need. Castle’s films are probably an acquired taste, but it’s a taste I acquired pretty quickly. 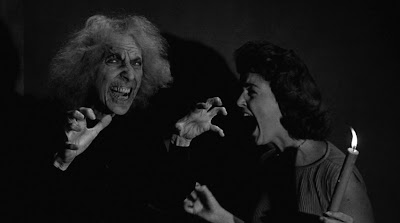 It helps a film like House on Haunted Hill to have a legitimate actor like Vincent Price starring. Price, of course, made his name in cheap, not-very-scary horror movies, but he’s still Vincent Price, and he’s pretty damn awesome. The truth is that he’s really the best thing going in this one, but he’s also more than enough. Even when the movie was stupid, Price was worth watching.

The set-up here is pretty typical. Eccentric millionaire Frederick Loren (Price) decides that his wife’s idea for a party in a haunted house is a good one. Of course, since he and his wife basically want to kill each other, we’re set for a fun party. Frederick invites five people to what is considered a genuine haunted house, promising each $10,000 (roughly $70,000 today) if they can stay there for the night. The five are test pilot Lance Schroeder (Richard Long), psychologist Dr. David Trent (Alan Marshal), reporter Ruth Bridgers (Julie Mitchum), house owner and all-around drunk Watson Pritchard (Elisha Cook, Jr.), and Loren employee Nora Manning (Carolyn Craig). Pritchard is convinced the ghosts are real and that they’re the real cause of a reported seven deaths in the house. As the film goes on, it’s evident that this party is more or less about Frederick Loren and his wife Annabelle (Carol Ohmart) trying to kill each other off.

Mostly, though, the film is about scaring the living hell out of Nora Manning. Everything that happens in the house happens to her. First, Lance tries to corner her and put the moves on her. Then he gets locked in a room. Nora sees what she thinks is a ghost and freaks out. Lance is discovered with a minor head wound. Next, she sees the same apparition up close (as in the picture above) and freaks out again. Later, she finds a head in her suitcase that disappears when she tries to show it to someone else. And eventually, Annabelle is discovered hanged in a hallway. It’s supposed to look like a suicide, but it’s evidently a murder. Pritchard drinks a lot, Dr. Trent talks about hysterical women at great length, and Ruth is pretty much a non-entity throughout.

Of course, it’s all a huge elaborate plot, which I will not spoil. Eventually, bad things happen to some people and Nora gets scared over and over and screams constantly. And then the film ends with something sort of like a resolution, but not a very satisfying one. It doesn’t really matter, though, because this isn’t about plot, but cheap scares.

The truth is that with the lone exception of Frederick Loren, this film really only works if everyone involved in the plot is ridiculously stupid. In addition to watching this in its original black-and-white version on NetFlix, I watched the colorized DVD with the audio track of Mike Nelson from Mystery Science Theater 3000 making fun of it. A lot of what he said through this is pretty accurate. Most of the characters are really dumb. Lance is like the most ineffective hero ever conceived. He repeatedly gets hit in the head or locked in rooms with no way to get out. Nora screams constantly. Rather than running away from things, she just stands and screams at them. I realize this is a cliché of the genre, but she takes it to a ridiculous level. Elisha Cook, Jr. is always a bright spot as an actor, but Pritchard is a drunken sot who thinks that human actions are evidence of ghosts. Dr. Trent is as exciting as a beige room, and Ruth is such a non-player in this that I wonder why the role was cast.

More than this, there are some unexplained plot holes here that defy any sort of cogent analysis. At one point, we witness something that looks purely like evidence of something supernatural. A rope—the one used to hang Annabelle—travels up through a window and winds itself around Nora’s feet. There’s no explanation for this. The ending is similarly bizarre in that it only works if most of the people in question have the survival instincts of brain damaged emo lemmings. The big scare moment (again, the picture above) has no point—the woman is actually the wife of the caretaker, so there’s no reason for her to be where she is or be standing like she is.

You know what? I don’t really care. I love William Castle’s stuff not for the paper-thin characters or stories that don’t really work, but for what they represent. Castle’s films are about having fun and enjoying being at a movie, seeing a few goofy thrills, and laughing along. They’re purely silly entertainment, not meant for anything more serious than just something to have on and enjoy. House on Haunted Hill won’t change your life, but you’ll have 75 minutes of fun. Really, what more could you want? 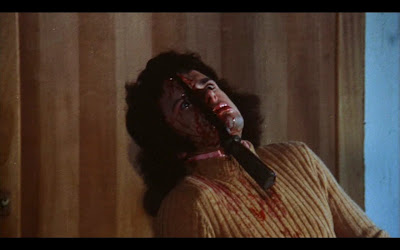 I never know what to expect when I choose a film off the Fangoria list, so when Reazione a Catena (Bay of Blood on NetFlix, also called Twitch of the Death Nerve and a few dozen other things) showed up not available on disc but streaming, I figured I should watch it rather than risk it going away before I saw it. As often happens with films like this one, I’m not entirely sure why I watched it. I’m not saying this is a bad film—it does have a pretty impressive pedigree—but I don’t really know that I followed it completely.

We start with the murder of an old woman named Countess Federica Donati (Isa Miranda). Her killer is her husband Filippo (Giovanni Nuvoletti). He barely has time to enjoy his divorce by strangulation when he is in turn slaughtered by an unknown assailant. Since he left a suicide note for his wife, Federica’s death is considered a suicide and Filippo’s disappearance is merely curious. All of this is relevant because it leaves the Countess’s estate in question, and her estate entails the bay mentioned in one of the American titles of the film.

Now we get a whole cast of players. There’s a real estate developer named Frank Ventura (Chris Avram). He and his girlfriend Laura (Anna Maria Rosati) want the bay for themselves to develop. Frank is plotting with Simon (Claudio Volonte), the Countess’s illegitimate son for possession of the bay. However, there is also the Countess’s daughter Renata (Claudine Auger) and her husband Albert (Luigi Pistilli), who want the bay as well. Entomologist Paulo (Leopoldo Trieste) and his kooky wife Anna (Laura Betti) live at the bay and would prefer it not be developed. With two deaths down, everyone essentially starts hunting each other looking to inherit the land as the ultimate prize.

Really, that’s it. At one point a group of four shows up at the bay and pretty much breaks into the now-abandoned house of Federica and Filippo Donati. Whomever is the mysterious killer (you find out eventually) decides that they have to go. We get some completely gratuitous nudity of one of the women and then four murders right in a row, some of which were duplicated shot-for-shot in one of the Friday the 13th films. This whole section of the film is nothing more than there to provide us with victims. It takes a good 15 minutes for them to show up, strip down, have sex, and get murdered, and they really have nothing to do with the plot.

From what I can tell from watching, this movie exists only as an excuse for a bunch of grisly (for the time) murders including a decapitation and a guy getting something like a boat hook in the middle of his face. There are (I think) 13 deaths in this film and while some are fairly tame, a number of them look like a template for what would become de rigueur in the slasher genre this film helped to start.

There are plenty of weird things to note, too. Luigi Pistilli, who plays Albert, looks almost exactly like James Caan and Vincent Shiavelli had an Italian lovechild. Seriously, every time he showed up, I kept wondering what the hell James Caan was doing in an Italian pseudo-giallo. There is another moment late in the film when Simon decides to go on a killing spree and picks up his weapon of choice. The musical selection at this point is almost romantic, making Simon a contemplative, shy and retiring killer. Later, we get a return of the same (or at least similar) music as one of our bloodthirsty family members, impaled on a spear, slowly expires.

A few extra notes of interest—according to IMDB, this film has the largest number of alternative titles of any film in existence, which is sort of funny. Allegedly, Christopher Lee walked out of the theater in protest of the extreme violence as well. Finally, it has the most what-the-fuck ending I’ve seen in a long time.

This film, by whatever name it goes by, is of interest for fans of the slasher genre, because in many ways, this film invented that genre. If you are a fan of big, scary guys with sharp weaponry chasing teens around the woods, you should really check this one out, because you’ll recognize almost every shot in it from something you’ve seen before, but that came after.

Why to watch House on Haunted Hill: A classic from schlockmeister William Castle.
Why not to watch: It’s goofy, and it works only if all non-Vincent Price characters are rock stupid.

Why to watch Reazione a Catena: It is considered the grandfather of the slasher film.
Why not to watch: For a movie that averages a killing every 6 ½ minutes, the plot is far too convoluted.