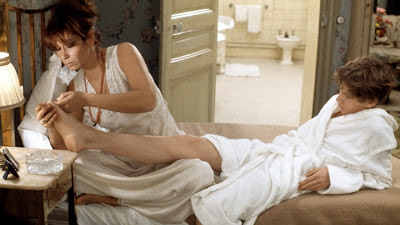 That, honestly, is about the only thing I really liked about Le Souffle au Coeur (Murmur of the Heart), which otherwise plays like “Adventures in Assholery” set to a jazz soundtrack. The people in this film are precisely the sort of people that I don’t like spending film time around. They are rude, arrogant, too rich for their own good, spoiled, entitled, and arrogant (yes, I said "arrogant" twice. They're really arrogant). And it gets worse. My impression is that in many ways, our title character is supposed to be something like a wealthy French version of Holden Caulfield. That might well be the case, because I hate A Catcher in the Rye and I hate that whiny little prick, too.

Our main character is Laurent Chevalier (Benoit Ferreux), a mid-teen and the youngest of three boys. His father is a wealthy gynecologist and his mother is overly protective, overly indulgent, and overly affectionate with all three boys. The family is wealthy enough to have a couple of servants and have the boys go to a private Catholic school. We discover quickly that all three boys are rebellious in that “movie rich kid” way. As mentioned in the paragraph above, they are entitled, badly behaved, and indulged in, which means they are constantly on the edge of control or completely out of control. They drink, destroy things, steal valuables from their own home and sell them, shoplift, and otherwise get into the sort of trouble that would have had me grounded for months but that earns them no punishment at all.

The focus of the first section of the film is on Laurent’s brothers trying to get him past his virginity. These brothers, Thomas (Fabien Ferreux) and Marc (Marc Winocourt) are self-described dummies who do poorly in school and break every rule possible. I can’t tell if we’re supposed to like them or not, but I found it impossible to think anything but ill of them. In the climactic scene of the first act, they take Laurent to a brothel and then walk in on him and watch the first time their brother has sex. So…y’know…ick.

I’d feel bad for Laurent if I didn’t dislike him just as aggressively. Much smarter than his brothers, he’s no better behaved. He’s mannerless, arrogant, and disrespectful to everyone he meets. At one point, one of the servants offers him a treat and he tells her to go to hell. When she complains of his language, he smashes a bottle of milk on the kitchen floor and tells her to clean it up. As a punishment for this, nothing happens. His mother continues to indulge him in anything he wishes, and he and his brothers are actively abusive to the people who serve them. It’s really pretty ugly.

Not, however, as ugly as the conclusion. It is discovered that Laurent has a heart murmur and he is sent to a spa to recuperate. His mother (Lea Massari) goes with him. Laurent aggressively chases a bunch of girls there. By “aggressively,” I mean he basically walks up to them and starts attempting to make out with them.

But here’s the crux of it. He and his mother are sharing a room. There’s one bed in the room. Laurent is pretty much constantly aroused. His mother is extremely touchy-feely, even watching him in the bathtub and washing his hair, which ends with him chasing her around while naked. Mom drinks quite a bit and is dissatisfied with her marriage, as evidenced by her disappearance with a lover for a few days and her welcoming the attentions of much younger men at the spa. Where do you think this is going? Yeah, that’s where it goes. And again…ick.

Every description I have seen of this film includes words like “happy,” “jolly,” and “innocent.” Sure, because those are three words I like to think of when it comes to a tale of incest. Seriously, this is just pretty gross and awful. And even if it ended with Laurent claiming his manhood in a far less Oedipal style, it’s still a story of a mangy little Bourgeoisie bastard, his asshole brothers, his smothering mom, and his distant, prickish father. No sale, ‘cause I ain’t buying. 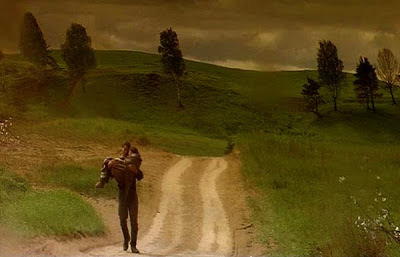 Aleksandr Sokurov’s Mat i Syn (Mother and Son) is a story of a far different, far more pure and much, much more beautiful mother/son relationship. The only two characters in this film are the unnamed title characters, the mother (Gudrun Geyer) and her son (Aleksei Ananishnov). It’s evident right away that the mother is extremely ill and her son is there to take care of her. She says in a pitiful whisper that she would like to go for a walk. However, it’s equally evident that she is bedridden, so this walk means that her son will carry her where she wants to go.

This is the bulk of the film. Mother and son walk, him carrying her as if she were an infant. Periodically they stop to rest. In these moments were are brought into the heart of their devoted relationship. There is a tenderness here and a pure intimacy of love between a parent and child. He sets her down on a bench, for instance, carefully making her comfortable, gently laying her head down and covering her with her coat, then watching over her to make sure she is okay before stepping away for a few moments.

The beauty of the relationship is how rapidly we realize that the roles of mother and son have changed. While she remembers him as a child and taking care of him, he has become the parent in this situation and is now the primary caregiver. In effect, he is the parent tending to her because she is no longer able to care for herself.

For many viewers, Mat i Syn will prove so slow as to be unwatchable. There are frequent long takes in which absolutely nothing happens except for a very slow, deliberate track or pan of the camera. Often, we are given long moments of no dialogue and no real movement. Instead, we are witnessing a series of tableaux. Large portions of the film are not merely slow, but are static.

However, I do not in any respect object to this, because Mat i Syn is one of the most beautifully shot films I have ever had the opportunity to watch. The film is the closest thing I have ever seen to a moving impressionist painting. A great deal of the film is visually skewed, canted at a strange angle and moderately stretched to make it look slightly off. There’s something going on here visually that is mildly disturbing but similarly visually arresting. The colors are mostly earth tones, washed out pale colors, grays, and browns, but are, despite this dun-colored wash over everything, somehow vibrant. We get small flashes of color at times—a distant fire in a hearth through the doorway of a light tan house. At other times, we get a subdued palette of green landscape. Everything appears as if viewed through a filter. It constantly looks like early dusk, or moments before a rainfall.

The end result is a film to experience on two levels. The first is the bring us in to this relationship between old, dying mother and young, devoted son. The strength of this relationship here is overwhelming in the film, and is painfully pure. The second reason to watch is the stunning beauty of what Sokurov does with his camera throughout.

Mat i Syn won’t please the action junkie. It’s very short running time (just over 68 minutes) contains no real action and not really a plot. What it does contain, though is a beauty and poignancy the like of which I have rarely seen. This is a film to watch more than once. I can only imagine that a repeat viewing will only enhance my first impression. It will also offer another chance to stare at the incredible visuals.

Why to watch Le Souffle au Coeur: A basic switch in the typical coming-of-age story.
Why not to watch: Oh…ick!

Why to watch Mat i Syn: It’s painfully beautiful.
Why not to watch: Its only two speeds are really slow and stop.