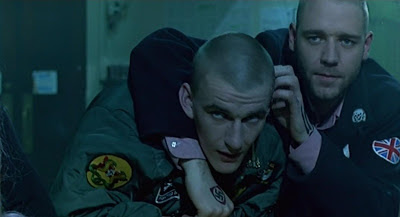 If one assumes that all of the World War II films about the Holocaust are, on a deeper level, about race, then race relations are the most frequently filmed topic on The List. Naturally, when it comes to film, mixing it up with various races isn’t apple pie and ice cream. With a film like Romper Stomper, race is front and center, and what happens is pretty damned ugly.

I’m going to guess that most of the readers here are more familiar with a couple of other films, one older and one newer than Romper Stomper, but it’s the best comparison I can think of. A great deal of this film comes across like A Clockwork Orange had a lovechild with American History X. We have the sort of random gang violence of Kubrick’s film, the thoughtless crime and rampant destruction for no purpose other than to destroy something. All of this is motivated by race, though, since the bulk of our characters are Australian white supremacists. What this means for those of us watching is that there’s plenty of Nazi regalia and lots of swastika tattoos. The violence tends to be perpetrated against the Vietnamese—a bit of a change from what Americans might be used to—but it ultimately results in the same thing.

We start with what looks very much like the attack on the old bum in A Clockwork Orange. A group of neo-Nazi skinheads beats up a pair of Vietnamese-Australians. This group is led by Hando (Russell Crowe), with his friend Davey (Daniel Pollock) as a sort of lieutenant. Around the same time, we are introduced to Gabrielle, or Gabe (Jacqueline McKenzie). Gabe is a drug addict, an epileptic who appears to take everything that isn’t her medication, and the girlfriend of a junkie. She’s “rescued” from this relationship by her father (Alex Scott), who we learn right away is also sexually abusive.

Not long after this, Hando meets Gabe and they become not really an item, but a sexual pairing. Gabe discovers Hando’s fixation with all things Third Reich. In the meantime, the bar that the skinhead gang frequents has been sold to a Vietnamese family. Naturally, this incites a riot. The skinheads beat up the new owners, but attract the attention of the Vietnamese contingent in the area. What results is a brawl in which a number of the skinheads are killed. They are tracked back to the warehouse they live in and are forced to flee while the Vietnamese-Australians break in, ransack the place, and eventually light it on fire.

Seeking revenge, the skinheads decide to purchase guns. To get the money for it, Gabe suggests they raid her father’s house. They try, but get sidetracked and eventually leave with virtually nothing. During this time, it’s revealed that while Gabe is attracted to Hando, she’s also interested in Davey, and the feeling is mutual. When the robbery of Gabe’s father’s house goes poorly, she leaves the group. Before she goes, Davey tells her where she can find him, and he leaves as well. Gabe calls the police, informing them of where the skinheads are now squatting. This results in a death, the bulk of the gang being arrested, and Hando going on the lam, looking to hook back up with Davey and, if possible, get revenge on who turned them in. All of this culminates in a third act that forces Davey to decide what sort of life he wants.

Romper Stomper is a brutal and unrelenting film. It doesn’t shirk from the violence or the brutality of the skinheads. The massive brawl with the Vietnamese is long—almost too long, but I think this is intentional. The fight builds and builds, and throughout, members of the skinhead gang are isolated and beaten before the fight moves on to the next person fallen behind. It’s entirely unpleasant and never seems to end—it’s minute after minute of uncontrolled chaos. A gutsy move from director Geoffrey Wright.

I need to spend some time discussing the soundtrack. While a great deal of what we hear is a traditional soundtrack, much of the film is peppered with hate music, neo-fascist punk with racially repulsive lyrics. I mean it literally when I say that the music in this film consists of people shouting about beating up and killing anything that isn’t white, marching in the army of the Fourth Reich, and other forms of anti-everything racism. Again, this is certainly intentional from director Wright—these choices were specific and designed to make the viewer uncomfortable as well as accurately accompany the various scenes. For my part, I found it difficult to listen to.

Overall, though, Romper Stomper is worth a watch. This is not a film to enjoy, per se, but a film to experience as a view into an ugly part of the world. It’s not as difficult as American History X, but it covers much the same territory. It just did it first.

Why to watch Romper Stomper: It’s American History X meets A Clockwork Orange.
Why not to watch: The soundtrack is hard to listen to.