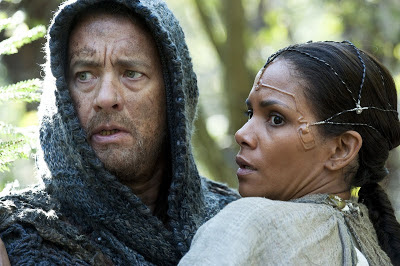 Sometimes I love what I do.

I don’t go to the movies very often. It’s not the expense (I watched today’s film for a paltry $5.00), but the time. I tend to watch films piecemeal because I have to. Twenty minutes here, half an hour there. There are times when it takes me a full day to get through a 90-minute film. When I do have a chunk of time to watch something, it’s usually because I’m doing something else. I’ve paired a lot of socks and done a lot of ironing while watching a movie. Since theaters don’t allow me to come and go as I please or pause when I ask them to, and since they won’t allow me to bring in my ironing board, I find myself without the necessary chunk of consecutive hours most days. But I do make exceptions, and Cloud Atlas is just such an exception.

Before I get too much into the heart of this, let me say this now and like this: I officially forgive the Wachowskis for Matrix: Revolutions.

I’m not going to go too far into detail on the plot of this film. If you’ve seen it, you know exactly why. If you haven’t, believe me—I’m doing you a favor. Cloud Atlas is an interweaving of six stories that are not connected on the surface but that are connected (pardon the pretension) at the soul. Essentially, the characters we see in each story are successive reincarnations of the same souls—fighting, loving, meeting and breaking with each other—constantly in conflict or in concert with each other down through an enormous span of time. In lieu of a plot summary, I’ll instead offer a brief description of the six stories. They are:

A mid-19th century man dying from a strange illness attempts to return home. Along the way, he changes his opinion about the nature of slavery.
A young musician in the 1930s hires himself to an old composer as a scribe. The young musician is working a piece of great significance, but risks exposure if he is revealed as a homosexual.
A journalist in the ‘70s discovers that a nuclear power plant is unsafe thanks to a conversation with the ex-lover of the man in the second story.
The modern-day operator of a vanity press gets into trouble with the family of a client, then gets into further trouble when his brother has him committed to a nursing home.
A cloned worker in a dystopian future rebels against the controls on her.
In a distant future, one of the few remaining technologically-advanced people look for aid from a group that has returned to tribalism.

Since the entire theme of the story is that these lives and unions and connections break apart and reconnect over time, Cloud Atlas succeeds with a surprising economy of actors. Essentially, the same small group of actors returns again and again for each of the different stories and time periods, often with roles of vastly different sizes. Tom Hanks, for instance, is pivotal in the 1850s and the distant future and almost non-existent in many of the other stories. It is often difficult to tell who is who in various stories; another aspect of the film’s genius being that there’s a good deal of gender switching going on here.

If I have a complaint here, though, it comes in this same place. While frequently the makeup and prosthetics are tremendous, even when you can tell the actor below the pounds of movie magic, there are times when it fails rather spectacularly. In the modern day story, for instance, the brother of our publisher is played by Hugh Grant. I had no idea it was Hugh Grant under that vast amount of cosmetics. At the same time, though, I didn’t care because the cosmetic work was so plainly obviously cosmetic work that he didn’t look real. He looked, instead, like a cartoon character, and it was disturbing every time he showed up on screen. Similarly, Doona Bae isn’t going to pass for the daughter of an aristocratic white slave owner in the antebellum South.

However, this is a minor quibble and not one that is worth any serious complaint on my end. Everything else more than atones for bad makeup here and there. Let’s talk first about the staggering beauty of the film regardless of the time period. Each different age is beautifully filmed (although some are naturally more beautiful than others). Better, each period of time has its own internal consistency. The dystopian world of Neo Seoul, for instance, is a fully-realized place that has laws and conventions and a particular structure. This, of course, is easy for the past and the present, but quite difficult when depicting the future. The technology throughout is seamless, as is the world. For instance, how do you solve the problem of flying cars? You create holographic roadways for people to “drive” on, preventing them from crashing into each other from above or below. It’s a smart, real solution that makes immediate sense to the viewer.

Since we are following a single soul through its journeys, essentially, it is also smart enough to not give us the same actor as that travelling soul. Our main protagonist in each story is marked by a comet-shaped birthmark, and this birthmark travels from incarnation to incarnation, switching gender and race as a subtle reminder not only that we are all connected, but that we are, quite literally, all the same.

Similarly, in the post-apocalyptic future, the language has changed dramatically. A brief foray into discussion boards indicates that there are plenty of people who didn’t like this aspect of the film, but it’s one of my favorite parts. Languages do grow and change and alter, and it’s something most futuristic science fiction gets wrong. Five hundred years from now, English is going to sound like a very different language, and thus do our people in this story have a different means of expression. It’s still English, it’s still understandable, but it has changed in many ways, all of which (or at least most of which) make perfect sense.

In other words, Cloud Atlas gets almost everything right. It’s worth the nearly three hours(!) of its running time. It does get confusing—it certainly is not for the weak-minded or weak-willed, but it rewards those with the guts to stick with it by being gorgeous, full of moments of true human beauty and terror (in other words, human moments), and containing, I think, a fanciful nugget of truth.

Why to watch Cloud Atlas: Filmmaking at its grandest.
Why not to watch: Plan for confusion for at least a chunk of the running time.

Posted by SJHoneywell at 3:46 PM