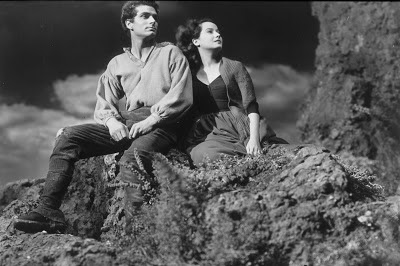 As a member of the community of 1001 Movies bloggers, it’s nice to reach out and help every now and then. Chip Lary over at Tips from Chip generally goes above and beyond in this department, sending me a few films with the promise of more. Yes, I’m sending some back to him. Not a bad deal for the price of postage. Anyway, one of the films he sent along was the difficult-to-locate 1939 version of Wuthering Heights, which also happened to be the only film left in the 1930s for me.

The film is, of course, based on Emily Bronte’s book of the same name. There’s plenty of sighing, requited but unfulfilled love, and the consistent razoring of the thin line between love and hate. The film is bookended by the arrival of a man to the desolate house of Wuthering Heights where he meets the angry and impolite Heathcliff (Laurence Olivier). The newcomer then sees an apparition out on the moors and Heathcliff runs out after it. Not knowing what to think, we’re given the full story of Heathcliff and Cathy (Merle Oberon), his long-dead love.

So back we go, 40 years into the past when Cathy’s father arrives home from Liverpool with a surprise—a young lad he picked up on the streets. Evidently, this was more common a couple of hundred years ago; today, this would get you nabbed for kidnapping with suspicions of pedophilia. Anyway, the boy is dubbed Heathcliff and is immediately taken to by Cathy and disliked intensely by her brother, Hindley.

Eventually, the old man dies and Hindley (played as an adult by Hugh Williams) becomes the man of the house. He immediately falls into a series of vices. At the same time, Cathy and Heathcliff become closer, falling in love with each other even though their love really cannot be. After all, Cathy is a member of the aristocracy and Heathcliff is a mere stable hand. One night, they sneak over to the nearby Linton house and peek in. All is well until the dogs spot them and then all hell breaks loose. Cathy is injured by one of the dogs. She is taken in and cared for, and Heathcliff essentially banished because, y’know, stable hand. While Cathy recuperates, she begins to realize that she really wants the sort of life the Lintons have, something that Heathcliff could never give her. In particular, she finds herself mildly attracted to Edgar Linton (David Niven).

Eventually, Cathy agrees to marry Edgar because he can give her the life she wants despite the fact that she loves Heathcliff. Heathcliff goes off to, well, we’re not sure. Eventually, he comes back. Now he’s wealthy and, as a dig at both Catherine and her drunken brother, buys Wuthering Heights. He also starts to romance Edgar’s sister Isabella (Geraldine Fitzgerald), not because he loves her but because it’s the best way he can think of to get back at Cathy for marrying Edgar instead of him. Eventually, everyone pines away (pretty much literally) and we get back to the bookend.

So let’s talk about what this story and this film are really about, and that’s the fact that Heathcliff is a stone cold pimp. Seriously, he comes back to where he was treated as a servant and degraded by Hindley and to some extent Cathy because he’s made his fortune. Rather than announce his presence publically, he privately pays off all of Hindley’s debts, thereby purchasing the house of his youth, where he fell for Cathy and was abused by her brother. Then, because Cathy is no longer available to him, he straight up marries her sister-in-law just to piss her off. Dude is cold-blooded, but also pretty awesome. Of course, there’s also still plenty of mooning of Cathy, but when she continually denies him, he just gets more and more resolute to make her life hell for denying him. It’s a thing of pure beauty.

It’s also really difficult to like Cathy at all in this film or this story. She’s inconstant to say the least, and she vacillates between a marriage based on “Ooh! Shiny!” and her love of Heathcliff. She tells him right off that she won’t be with him if he doesn’t have the money to keep her in the style in which she wants to become accustomed. It’s entirely possible that she really does love him, but not enough to actually risk anything for him.

The only person here I really feel any sorrow for is Isabella, who gets a raw deal. She falls in love with Heathcliff who essentially marries her for spite, and so she withers away. In fact, she’s not even really a part of the bookends. This is a shortcoming of this version of the story—we don’t really discover what happens to Isabella here, and in many ways, she is the most sympathetic character in the film. At least for me, she’s the one who I actually liked enough to care about, since her only real crime was having shit taste in men.

Wuthering Heights, of course, is straight out of that Victorian idea of romance, with people pining for each other instead of marrying each other. There’s so much social nicety going on that everyone ends up unhappy. Personally, I’m pretty unmoved by it. What I see here isn’t love but obsession, since our two principles go back and forth between love and hate with each other obsessively. As such, I have trouble really believing this is a romance. It reminds me a lot of Dangerous Liaisons, just without the sex, and thus without a lot of the really fun stuff.

Why to watch Wuthering Heights: A classic version of a classic story.
Why not to watch: People metaphorically shooting themselves in the foot doesn’t make for a fun film.