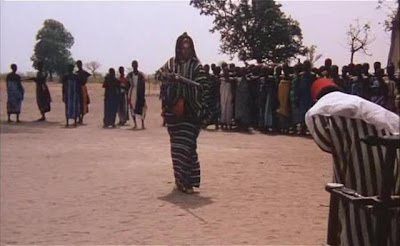 There’s a certain pleasure in seeing a film that you’re pretty sure no one else you know has seen. Such is the case with Ceddo, a Senegalese film that manages to be as obscure as just about anything I’ve sought in the past three years. As often happens with the more obscure films I watch, I went into this completely cold, not knowing the first thing about this film other than its country of origin and that the director is named Ousmane Sembene. I would never have expected what this film is—a slow-paced discussion on religious persecution.

It’s difficult to tell the time period this film takes place in. In a lot of respects, it looks modern. On the other hand, it’s evident that the slave trade is taking place in the world of the film. In fact, at one point a collection of characters discusses the very real possibility of selling their own families into slavery. My guess is that Ceddo takes place during the 18th or early 19th century. I suppose, in all honesty, that I know too little of West Africa to be able to speak more relevantly than that.

Ceddo is about the advance of religion into a traditional, tribal culture. Demba War (Matoura Dia) is the king of his tribal group and has converted to Islam. A number of his followers convert as well, but many do not. This sets up a problem between the two camps, which become divided over the issue of religion and religious freedom. After a great deal of oppression from the Muslims, those who remain faithful to the traditional religion retaliate by kidnapping Demba War’s daughter (Tabata Ndiaye) and holding her for a ransomed peace. The king sends off her various suitors one by one, each of whom is killed by the rebels. Eventually, the war heats up as the two sides murder each other in the name of religious peace.

Through all of this, there is an underpinning of both Christianity (there are a couple of white Europeans in the mix) and slavery. The slavery—the two warring factions threaten each other with it and the group of non-Islamic people have the idea of selling their own families into slavery—is really the only clue of when this film takes place. A good deal of the music in the film is modern Christian spirituals, an anachronism that doesn’t quite fit in with a film that is otherwise taking place in a different century. A lot of the other music is modern jazz, which has the same effect.

The central figure of Ceddo is the imam (Moustapha Yade, I think), who is as much an adjunct for modern Islamic fundamentalists as he is for modern Christian fundamentalists. Anything that criticizes him or Islam is evil and needs to be destroyed. His religious power usurps that of everyone else. He enforces his will completely, essentially forcing the conversion of everyone still left in the tribe at the end. The punishment for disobeying any of his wishes is immediate death or sale into slavery followed by (according to his threat) eternity in Hell. In other words, the Imam in the film of 40 years ago represents the same religious evil of 200 years ago and still present today. In fact, the Imam has the king killed and takes over not simply religious authority but temporal authority as well.

The biggest issue I had with Ceddo is that the bulk of its running time is people sitting in groups talking. No doubt the conversations are critical; after all, they determine the fate of these people and their religious destiny, but very little happens throughout the film. There are a couple of attacks here and there, but the majority is simply conversations. It’s something that requires patience to sit through.

Still, I’m mostly impressed with it. While it’s hardly an exciting film, it can’t help but be an interesting one. Those practices which most belie the beneficent nature of religion were in practice 200 years ago, 2000 years ago, and 2 hours ago. Ceddo is a reminder that enforced morality is no morality and that religious conversion at gunpoint is sadly a real threat in many parts of the world. The ending is one of real symbolic significance, and one that I leave to individual viewers to interpret. Director Ousmane Sembene’s sympathies, though, are pretty obvious.

As a final note, the word “Ceddo” means “outsiders.” It is with those who refuse to convert that our sympathies lie and should lie. It is they who have their culture destroyed and stripped from them. Nowhere is this more evident than when the imam renames every person in the tribe, taking away the last of their original cultural identity. Weighty stuff, that.

Why to watch Ceddo: Religious persecution that still resonates.
Why not to watch: For a film that contains kidnappings and murders, it’s pretty talky.