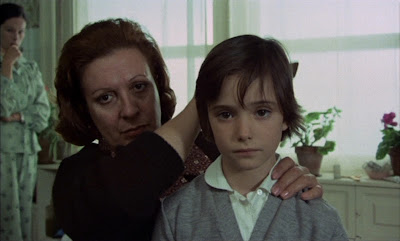 Finishing this list has become something sort of like a chore in the sense that in most cases, the films I have left are the films I simply haven’t cared to watch yet. That’s not true of all of them, but it’s sort of true in general. It was true yesterday and it’s equally true of today’s film, Cria Cuervos (Cria!). This is yet another film I went into with zero expectations and no real desire to watch and found a film very much worth my time and attention.

One of the sells for me is the connection between this film and a more recent film like Pan’s Labyrinth. Guillermo del Toro’s work is far more fanciful and tied to that magical realm than this one, but there is little doubt in my mind that del Toro looked to Cria Cuervos for at least some of his inspiration. The connection to a vivid fantasy world, the death of the mother of the main character, even the time period of fascist Spain connect the two films on a number of points.

Ana (Ana Torrent) is the middle child of three girls. As the film opens, she sees a strange woman leaving the bedroom of her father (Hector Alterio). Upon investigation, Ana discovers her father dead in his bed. She then has a short conversation with her mother. It all seems so completely normal. So it is something of a shock when we discover a few minutes later, at her father’s funeral, that her mother (Geraldine Chaplin) died several years earlier.

The upshot here is that Ana, who is eight or nine, decided that her mother’s illness, despair, and death were caused by her fascist father. As that is the case, she decided to do something about it. Years before, her mother had told her to throw away a small bottle of white powder, claiming that it was a deadly poison. Rather than throwing it away, Ana kept it hidden, and mixed it with her father’s drink the night he died, both for revenge and for freedom from the difficult and limiting house he kept for his children.

This plan backfires completely. First, it wracks young Ana with the guilt of her father’s death at an age where such guilt shouldn’t exist. Second, it causes the arrival of her Aunt Paulina (Monica Randall), who is every bit the stern disciplinarian that her father was. In this new environment, Ana and her older sister Irene (Conchita Perez) and younger sister Maite (Mayte Sanchez) are forced to deal with the same sort of domineering relationships they always have. Their only real refuge is the servant Rosa (Florinda Chico) and their nearly catatonic grandmother (Josefina Diaz). The depression of her situation weighs heavily on Ana to the point that she contemplates suicide and seriously considers using her lethal poison on Aunt Paulina.

We see virtually everything through the eyes of Ana, who relives much of her past for us, with her mother and father appearing as real as if they actually existed. We also get additional commentary from the now-adult Ana (also played by Geraldine Chaplin) as she attempts to make sense of the events of her past.

Much like the first Ana Torren film I saw (El Espiritu de la Colmena), this is a film that moves at a very slow pace, but in the same way, it is not a pace that ever feels like it drags. It simply moves at a rate that allows Ana to reach the conclusions she needs to through her more limited life experience. This is not a dull film by any stretch of the imagination, but it does have a dream-like quality, as did Torrent’s earlier film. What works interestingly here is how subtle the film works in the parents after they have died. It’s not always obvious if we are seeing a flashback or one of Ana’s flights of fancy when her parents appear, because they are always worked into the scene as if they are truly present.

This is also the second film I’ve seen in the last few days that is focused around a child performance that is truly excellent. Torrent’s role as the young Ana is either a case of a child terrified of the camera or of one possessed of such genuine skill that she is completely comfortable in front of it. I prefer the second interpretation. Ana is a character who lives inside her own head, and torrent’s work here allows us to see that thought process going on, even when she is standing still and expressionless. To talk about what I really want to talk about, though, requires a spoiler tag.

The white powder that Ana believes is a terrible poison is nothing more than baking soda. Her father simply happened to die on the same night that Ana placed it in his drink. It brings up interesting ideas of the difference between belief and reality and the nature of guilt. Was Ana truly guilty of her father’s death? She certainly didn’t cause it, but her intent was obviously there. It’s an interesting moral question, and wisely, the film doesn’t choose to answer it but allows us to create our own answer from what we see.

I should add that one of the saddest things I’ve seen this year is this poor kid burying her guinea pig by herself.

This is a surprisingly powerful film. It’s not an easy thing to see an eight-year-old girl wish herself dead. I’m not sure this is one I would say I enjoyed, but it’s a film I’m very much glad to have seen, and would watch again without hesitation. It would make an interesting pairing with Guillermo del Toro’s work, if only for the differences between the mundane magical realism of Carlos Saura’s world and the much more fantastic world of del Toro’s imagination.

Why to watch Cria Cuervos: Magical reality that offers a unique moral tale.
Why not to watch: It can be difficult to follow.