Film: The Hills Have Eyes
Format: DVD from personal collection on laptop. 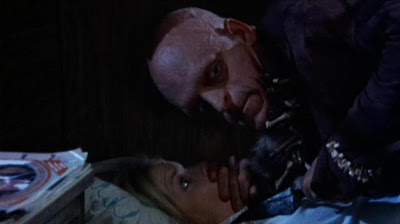 There are times when a horror film director walks the edge between what he can get away with and going just a step too far. It’s a difficult line to walk. A film that takes things too far risks losing the audience completely, but a film that rides that thin edge has the chance of becoming one of the greats of the genre. It’s up to the individual viewer to determine for him- or herself if The Hills Have Eyes steps over that boundary or toes as close to the line as it can. I’m still not 100% sure myself. There are a couple of moments here that put the viewer in the position of watching a film made by someone suddenly capable of doing anything. Wes Craven breaks as many boundaries with this film as he did with The Last House on the Left.

This is also a film that helped create any number of horror film tropes that are still in play today. The Carter family is driving from Ohio to California and stops in the middle of nowhere in the desert at an old gas station. The owner, Fred (John Steadman) warns them that they’re out in the real boonies and that they should stick to the road. Of course, the family does not and eventually their car drives off the road and breaks an axle, leaving them completely stranded and unable to raise help on their radio. That’s bad enough, but it’s certainly not the worst thing that will happen to the Carters.

Stranded, the patriarch, Bob Carter (Russ Grieve) hikes back to Fred’s station while son-in-law Doug Wood (Martin Speer) wanders off in another direction. The rest of the family, mother Ethel Carter (Virginia Vincent), grown children Bobby (Robert Houston) and Brenda (Suze Lanier), married daughter and Doug’s wife Lynne (Dee Wallace) and her infant daughter Katy remain with the vehicles, hoping that the two men will return with help before too long, but knowing that it’s likely that they will be spending the night in the desert.

And, it turns out, they’re not alone. Years earlier, Fred had a wife, a daughter, and a son. Everything was fine until the boy was born. His birth killed Fred’s wife, and the boy was completely possessed by evil. He killed animals on the farm and eventually burned down the family house, killing his sister. Fred tried to kill him, hitting him across the face with a tire iron and then dumping the body out in the desert, but the boy lived and raised his own family out in the wilderness. This family is now six strong and survives by waylaying passers-by, killing and robbing them, and eventually eating them.

This wild child has become Jupiter (James Whitworth). His mate, Mama (Cordy Clark) and he run the family gang. The three boys are Mars (Lance Gordon), Pluto (the awesome Michael Berryman), and Mercury (Peter Locke). The lone daughter is Ruby (Janus Blythe), and it’s evident from the start of the film that she is the low mutant on the totem pole and wants to get away from the clan by any means possible.

What happens is what you probably expect, but it happens in ways you do not. As I said at the top, Craven takes this film places that are unexpected and terrible, crossing lines that hadn’t been crossed before. Oh, we’d seen cannibalism and horrible, senseless murder before, but the assault by the desert mutants on the Carters’ sad little campsite is surprisingly brutal and has surprising casualties. The family’s vengeance is almost as terrible, eventually bringing the survivors down to the sub-human level of their attackers.

For me, that’s the brilliance of a film like The Hills Have Eyes. It’s not the shock value or that careful skirting of the line of appropriateness of what could or should be shown in a film like this. It’s the realization that the only real difference between the Carter family and Jupiter’s collection of feral weirdoes and cannibals is the situation. It takes only one terrible night to turn the Carter family into animals fighting for their own survival, and they commit acts that each would have seemed incapable of doing at the start of the film.

For me, the true measure of a horror film’s value isn’t in the amount of splatter or the body count at the end, but in the overarching idea that the film wants to impart. If that idea is the standard “teen sex is bad sex” or “don’t go in the woods,” the chances are that I won’t be that terribly interested. No, I’m looking for something deeper than this, and that’s what I got from The Hills Have Eyes. That idea—that we’re all just a terrible night away from returning to something terrible and primal—is a message I can respect. I can also respect Craven’s evident belief that violence, while it may end a problem, never undoes anything. It’s the same message in The Last House on the Left. The revenge doesn’t leave anyone fulfilled or happy, but drains them and leaves them empty.

Further, it's worth noting that The Hills Have Eyes either plays with or helps establish some of the main tropes of American horror. There's a reason that this happens in a vast, open landscape. The quintessential American landscape is one of unbroken skies and huge plains trailing off in the distance. It's that open land that took people out to the coast in the first place. Populating that emptiness with something from our nightmares makes good sense.

There’s a reason the film ends as it does. And that reason is what delivers the message that makes this worth seeing. That, and the fact that Michael Berryman can actually act and manages to add depth to the character of Pluto makes this a worthy watch.

Why to watch The Hills Have Eyes: Wes Craven at close to his most dangerous.
Why not to watch: It has the ability to turn you off to the genre as a whole.

Email ThisBlogThis!Share to TwitterShare to FacebookShare to Pinterest
Labels: horror, The Hills Have Eyes, Wes Craven