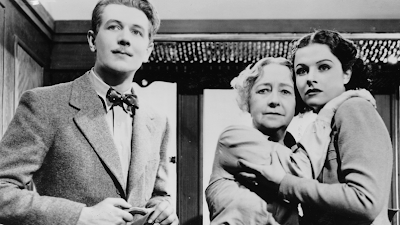 Everything about pursuing this list of films is conditional. I thought I had been done with silent films for some time, but the number of silent film reviews I’ve posted in the last couple of weeks belies that. Additionally, I had been done with the work of Alfred Hitchcock, and yet here we are again with another Hitchcock film. This time it’s The Lady Vanishes, a film from the late 1930s, and one that sees Hitch starting to include the sort of complexity that he eventually became known for. There’s a straight through-line in this film; there’s just a lot of stuff going on on the side and on the fringes of the plot this time.

An avalanche has closed of traffic in a small, fictional European country that is vaguely Switzerlandish, at least based on the languages spoken by the various people who crowd into a guesthouse. Included in this motley collection is Iris Henderson (Margaret Lockwood), a British girl looking to get back home in time for her impending marriage to a man she doesn’t really love or even care for very much. We meet a few more people here, too. The most important of these are Gilbert (Michael Redgrave), who is researching the folk songs and dances of the native population; and Miss Froy (Dame May Whitty), an ex-governess travelling back to England.

Iris and Gilbert meet cute when he has some of the hotel staff performing for him in his room and she gets him kicked out. What follows is a cute scene in which he invades her room until she agrees to get the hotel manager to reinstate him. While funny, this scene is important, because we also see Miss Froy being serenaded outside her window. She’s paying particular attention to the song up until the moment the singer is strangled. Gilbert’s loud guests also introduce Miss Froy and Iris.

The next day, everyone piles onto a train and heads off. Before boarding, Iris encounters Miss Froy a second time. During some confusing, Iris is struck on the head by a falling flower box. Miss Froy puts her on the train with her and looks after her for a bit, taking her for a cup of tea and watching over her to make sure she is okay. Iris takes a nap after tea and when she wakes up, Miss Froy is gone. More concerning, no one on the train will admit to having seen Miss Froy, attributing her presence in Iris’s mind to the blow on the head she took.

Of course it’s all a nefarious plot. And of course the only person who believes Iris is Gilbert, who assists her in trying to piece together the mystery of what happened. We as the audience learn why some of the people refuse to acknowledge the presence of Miss Froy. The Todhunters (Cecil Parker and Linden Travers) are not actually a married couple, but a couple having an illicit affair. They deny Miss Froy’s existence to avoid being connected with anything and starting a scandal. The two Englishmen, Caldicott and Charters (Naunton Wayne and Basil Radford respectively) are cricket-obsessed and think that if the train is stopped for an investigation, they will miss their opportunity to catch the end of the latest test match. But there is no explanation from the other passengers, which naturally means that they are a part of the conspiracy.

What we have in The Lady Vanishes is Hitchcock starting to get more complicated and complex with his plots. This film comes a couple of years after his first great film, The 39 Steps. The issue I had with that film was that it was too simple, too straightforward. The plot is essentially a straight line. The Lady Vanishes is a step away from this sort of plot, but it’s only a step. The plot here is again very straight and direct—Miss Froy vanishes. Iris and Gilbert attempt to find out why. They do so and there’s a confrontation at the end. What this includes over The 39 Steps is a number of side plots that confuse things on the surface, but don’t really do anything to truly affect the actual story.

There’s also a strange tentative quality to The Lady Vanishes. While there are certainly a couple of deaths here, virtually all of them happen to those people we don’t care about. People who, in a modern film would almost certainly die as a consequence of their actions, here get wounded or escape unscathed. It feels as if Hitchcock was scared to kill anyone with whom the audience might sympathize.

Don’t misunderstand me here. The Lady Vanishes is a fine film, and when we get to the actual reason for the story to have happened, it’s a fun one. This is a film that’s worth seeing only because it’s evidence of Hitchcock learning more about the craft of filmmaking and about the skills needed to put together a top-quality thriller. He got better from here, but this is a hell of a starting place.

Why to watch The Lady Vanishes: Hitchcock starts getting complicated.
Why not to watch: A lot of it is telegraphed.

Posted by SJHoneywell at 8:29 PM