Baby, It's Cold Outside 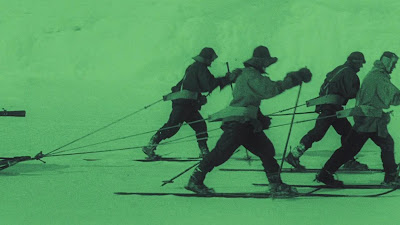 I can’t say I was overwhelmingly excited to spend time with The Great White Silence as a part of this project. I’ve already seen Nanook of the North, a documentary about the Arctic, so a different documentary about the other end of the world didn’t seem that thrilling a prospect. I’m not entirely sure why I held this opinion, because the two parts of the world are very different. The Arctic, for instance, is inhabited (see Nanook) while the Antarctic may well be the most inhospitable place on the planet.

The Great White Silence is the story of the doomed expedition of Robert Falcon Scott to reach the South Pole. Filmmaker Herbert Ponting accompanied the journey at least partway, and should be relatively glad he did not go all the way with Scott, since he and his party never returned from their final journey. That knowledge—the surety that the men we are watching are on their way to their deaths--is sobering.

This is a silent film, and a silent documentary, which means a few important things. First, there truly is no plot, although there is a definite story to follow. The second is that Ponting saw this evidently as a book with film accompaniment. I have rarely encountered this number of intertitles in a film, making this more or less an exercise in reading more than it is one of viewing.

Don’t let this dissuade you, though; the photography here is at times remarkable. While the opening sequences are the sort of silliness that often seemed to go along with the start of a great voyage—men dancing and engaging in mock boxing contests—once we reach the polar ice, it is immensely beautiful. There is a grandeur here that is difficult to express. Ponting’s narration indicates they encountered an iceberg larger than London. He also shows through still photography his method of taking some of his shots—leaning out over the side of the ship on a wooden platform. Other shots could only have been taken by painstakingly carrying his camera up the mast and shooting from the top.

For me, this is when this documentary is at its best. It is the scenery that is the real star of The Great White Silence. It is almost as interesting when he focuses on the local fauna, watching seals jump in and out of the surf or penguins diving and waddling around on the shore. This is the reason to spend time with this film. It’s to look at this vast wasteland, still managing to teem with life. It’s to see these incredible vistas both beautiful and terrible, to gaze at the massive volcano of Mt. Erebus, and to see the prow of the ship plowing through massive ice floes. Ponting wisely has human figures in many of his landscape shots, giving us a good sense of the size of the massive ice formations and glaciers.

Where the film slows down is, ironically enough, the places where it is actually accomplishing its purpose—the filming of the actual expedition. Watching a group of men unload a ship or bring the Siberian ponies ashore is uninteresting, to say the least. Fortunately, Ponting seems to have realized this, and we get only brief moments of such activity before we return to seals and orcas. Even this gets to be too much after some time. Five minutes of penguins in a row is more than enough, but we get well over 15 straight, following a long sequence on skua gulls. It’s all interesting, but there’s a lot of it.

The Great White Silence thus is a film that isn’t sure what it wants to be. Is it a nature documentary? Based on a large part of the middle section, that wouldn’t be an inapt guess. Is it a travelogue of the Antarctic? In part, it’s that, too. Is it a record of Scott’s fatal expedition to reach the pole? It is, but until the very end, it is the other options far more.

If there is an overarching problem with The Great White Silence, it is that while fascinating in parts, it doesn’t have the focus to be consistently worth watching. The music in the recent version of the film is both a benefit and detraction. It’s great, but it’s also very dreamy in many places, causing a serious risk of falling asleep. Fight through it; the final 20-30 minutes are remarkably poignant.

Don’t get me wrong; The Great White Silence is worth watching if only for the historical content and the fascinating nature photography. I can only wish that the art of filmmaking in general and documentary filmmaking in specific had been more advanced before an undertaking like this one.

Why to watch The Great White Silence: A unique record from the tail of the Age of Exploration.
Why not to watch: There’s more reading than even a standard subtitled film.

Posted by SJHoneywell at 8:07 PM