Before I get into this, I need to once again thank Chip Lary over at Tips from Chip. He not only located this film streaming online, he also walked me through the process of getting it to stream. (Note to Chip: The process worked the same way in Chrome). Chip has rapidly become the patron saint of 1001 Movies bloggers as well as our bodhisattva. 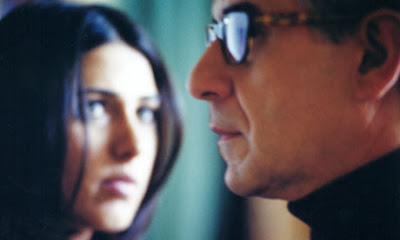 Films like Le Conseguenze dell’Amore (The Consequences of Love) are the reason The List exists in the first place. I mean that positively. This is not a film that I would have picked up on my own, but now, having seen it, I’m happy to evangelize on its behalf. Underseen films like this one, films of particular beauty and power are the reason listmakers make their lists. It’s to get people like me to see something we should, something that will move us or get us to think or show us something that will change us. Le Conseguenze dell’Amore has the potential to be that sort of a film.

We start very slow and become immersed in the sedate life of Titta di Girolamo (Toni Servillo), a man who lives on his own in a posh hotel in Switzerland. We know very little about him for some time. He likes to sit in the bar of his hotel. He walks alone through the streets of his city. He suffers from insomnia. He also avoids almost all physical and indeed human contact.

Over time, we learn a bit more about him. He has an unusual drug habit, for one thing. He is extremely punctual in all things. He sometimes takes delivery of a large suitcase full of money and deposits it in a nearby bank. This happens about once a week. We don’t learn until the film is about 2/3 done where the money comes from or why Titta lives the way he does. We don’t know why he has evidently divorced or separated from his wife and has no real contact with his children. All we really know for the bulk of the running time is that he lives the way he does for a reason, and part of that either requires a lack of human contact or that the lack of human contact is a part of who Titta is.

I’d rather not get into too many details here. It is sufficient to say and not much of a shock to suggest that the suitcase full of money comes from non-legitimate means and that the money isn’t his. When a couple of gun-toting men show up and spend some time in Titta’s room, that conclusion becomes even easier to draw, although we don’t learn the truth until well after this happens.

The event that motivates the actions in Le Conseguenze dell’Amore is the presence of the barmaid in the hotel where Titta lives. Sofia (Olivia Magnani) greets and says goodbye to Titta every day she works and he never responds to her. It’s evident by the way he looks at her that he is attracted to her despite their vast difference in ages. When she confronts him over his apparent rudeness, it begins a very tentative romance. The romance between Titta and Sofia is definitely there despite there being nothing physical between them. It’s almost as if Titta wants to take care of her as a surrogate for the children with whom he has lost contact.

Things change again not when Titta figures out a way to skim money off the top of his bank transactions, but when the two men with guns return and walk away with a week’s shipment. But since this happens around Titta’s 50th birthday and he has made plans with Sofia, he must make a series of choices that will determine his fate, these choices being the consequences of love mentioned in the film’s title.

One of the many things I like about Le Conseguenze dell’Amore is that it gives us the character of Titta to spend time with. I love characters who are truly unique but not in a specifically comic way. Titta isn’t wacky or silly or at all frivolous (a comment he makes early on). He is rather a character unlike any other I have encountered. He is entirely self-contained and acts on his own ideas in full knowledge of but without regard to the consequences. He is singularly fascinating.

I’d love to say more about this film, but I don’t want to because it’s one that people should discover on their own. It’s that sort of experience. It is strangely beautiful, and the slow pace at the beginning especially is never boring, but comes across as, for lack of a better word, lush. It feels bigger than it is, more special and more absorbing than it should be.

I haven’t been overwhelmed by the latest additions from the 10th Edition, but this one is a win all the way through.

Why to watch Le Conseguenze dell’Amore: A strange and strangely beautiful love story.
Why not to watch: The ending is something you won’t like, even though it’s great.

Posted by SJHoneywell at 6:04 PM