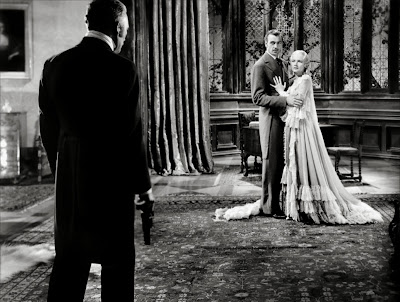 The opening of Peter Ibbetson promises us that this will probably be a glurge-fest. We are introduced to two children in 19th century Paris quarreling over what to do with some boards. Gogo (Dickie Moore) wants to build a wagon; Mimsey (Virginia Weidler) wants to build a baby carriage. We see their argument not with each other, but as they explain their positions to their respective mothers. It’s evident that Gogo’s mom is in poor health since she’s sitting in a wheelchair. The kids argue more, Mimsey’s doll is broken, and then Gogo’s mother dies. Mimsey reacts to this by giving her baby carriage and all the boards to Gogo. Cue the orchestra. Ah, the pathos!

Shortly thereafter, Gogo’s uncle from London shows up to take charge of the boy. Gogo and Mimsey attempt to run away, but it’s all for naught. The uncle (Douglass Dumbrille) immediately changes the boy’s name to the less clown-chic Peter Ibbetson, and thus we have our title. Peter grows up into an architect and also turns in to Gary Cooper. Soon enough, he is working on a restoration project for the Duke of Towers (John Halliday). Once there, he becomes smitten with the Duchess, Mary (Ann Harding), and she with him. And, of course, it turns out that Mary is the grown up version of Mimsey and the two have carried a torch for each other all these years. Cue the orchestra. Ah, the pathos!

But wait! Peter and the Duchess fall for each other before they know each other’s identity because it turns out that they are having shared dreams. See, they are connected at the soul, just as they were connected to each other in childhood. Their identities are revealed only later, after their love has blossomed once again. Cue the pathos. Ah, the orchestra!

The Duke of Towers (and seriously, that is the most badass title ever created in the history of everything) figures out that the two have fallen for each other despite the fact that neither of them have spoken of it, even to each other. He confronts the pair at dinner one night, which forces everyone’s hand. Peter prepares to leave, but goes one last time to see here, whereupon he is confronted by the Duke pulling a stone-cold pimp move and threatening the pair with a gun. Peter manages to avoid being killed and also manages to kill the Duke in self-defense. But of course a Duke is a Duke and Peter is merely an architect, so he’s sentenced to life in prison. Orchestra the pathos. Cue the ah.

If you’ve guess that I was not a fan of this film, you’d be correct. It goes deeper than the fact that the Paris-born and London-bred Peter Ibbetson speaks like a man who grew up in central Kansas. Cooper didn’t attempt to fake a British accent, which is probably for the best. The problem is that the nature of the film is glurgey at best. Peter lives his life almost entirely disconnected from everyone and everything around him, unaware of why he appears to have no joy or feelings in his life. His boss recommends a trip to Paris where Peter reconnects with his past, suddenly reliving his love for Mimsey, and everything is right with him again. It’s just so goofy.

In fact, while he’s in Paris, he meets up with Agnes (Ida Lupino) who tries to get him to show her a good time. Except for her broad Cockney accent, there’s nothing wrong with Agnes, but Peter takes her to his old house and proceeds to ignore her completely for the rest of their time together. It’s kind of dickish, to be honest, but what do I know? I haven’t ever had a psychic dream connection to someone I knew as a child.

The story this most reminds me of is Wuthering Heights, except in this case, the “Heathcliffe” character isn’t a badass pimp. Additionally, while Wuthering Heights gets sappy at the end and is fueled by anger through most of it, Peter Ibbetson is sappy all the way through. The dream connection that Peter and Mary make is something that continues through the rest of the film. In fact, it’s what fuels the end, and it’s why I labeled this film as “fantasy” in part.

Okay, this isn’t a terrible film. It’s really not. It’s just very forced and exists in a world of extreme romanticism. I’d go so far as to suggest that it attempts to be as tragically romantic as anything that came before it. That’s great if that’s what you’re into. I even tend to like romances that end on a downbeat, but this one doesn’t work for me. The downbeat part of it ends up being too tempered by the spiritual nonsense that acts as the film’s upbeat.

In other words, cue the diabetes. Ah, the saccharine!

Why to watch Peter Ibbetson: Early Gary Cooper before he really became Gary Cooper.
Why not to watch: Oh so sappy.