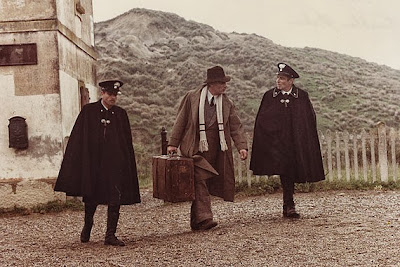 I knew in the first couple of minutes of Cristo si e Fermato a Eboli (Christ Stopped at Eboli) that this was going to be one of those films that I struggled with. It wasn’t specifically going to be an incredibly difficult watch per se, but I knew that when it came to writing about it that I was going to have a very difficult time. This is a film to point to as an example of one in which the majority of the action is internal. It’s a series of conversations more or less, and I’m being generous when I say that the majority of those conversations are dense and pretty turgid.

And that’s the issue with this film. Not much happens. Rather than having a plot summary, it has a plot sentence or two. Carlo Levi (Gian Maria Volonte) is a writer and artist, but also has a medical degree. He is arrested by Mussolini’s forces in the mid-1930s, and is exiled to a remote Italian backwater. He finds the people there to have been overlooked in almost every advance made in the last few centuries and decides to start practicing medicine to help the people as much as he can. That’s pretty much it, and this film runs almost 150 minutes.

What ensues is a great deal of talking. This could be very interesting stuff for someone with a particular interest in the Italian fascist state or someone looking for a high level discussion about art and the nature of art. Anyone willing to have that conversation likely beats me by default, since I know very little of Italian fascism and only a nudge more about art in general. I don’t know squat about the formal stuff. Needless to say, I don’t have a particular overwhelming interest in pursuing anything definite in this realm. I’m not at all concerned about the speeches of fascist mayors, the dispensation of the local priest’s books, or even if Carlo Levi deserved to be send out to this backward hellhole in the middle of nowhere.

This is a film that I simply don’t understand even the moderate hype from The List’s compilers. Watching two people talk about Italian politics from 80 years ago is flatly uninteresting except perhaps to Italians with a penchant for history, political scientists, or anyone desperate for side-by-side comparisons of fascism and communism.

I’ll grant that it’s a well-made film and I’ll also grant that much of what we see is beautiful. The scenery of this ass-end of Italy is something special. But I’m really grasping at straws here looking for something that makes this worth seeing. There’s too much nothing here, and what there is is stuff that I don’t care about at all. It’s also plagued by a strange echo in the soundtrack. The voices don’t seem to echo except in some scenes involving singing, but many of the sounds do and it’s disconcerting throughout. It’s entirely possible that this is just on the copy of the disc that I received. It’s also entirely possible that this was intentional for some reason I cannot fathom.

Thus, this will end up being one of my shortest reviews because there isn’t enough here to write about. After 145 minutes of watching people talk about politics and seeing chickens running around inside people’s houses and watching farmers get rained on in sudden cloudbursts, I ultimately have nothing constructive to say. 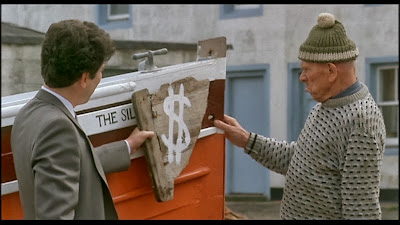 Any Star Wars fan worth his or her salt knows who Denis Lawson is. In the original trilogy, he’s the only guy to survive the attacks on both Death Stars. Like many a Star Wars fan, I was less knowledgeable of the rest of Lawson’s career, so it was a treat to see him not merely as a part of Local Hero, but as one of the main players.

Knox Oil and Gas wants to create a refinery, pipeline, and drilling area in a coastal town in Scotland. In fact, to do things the way they wish, they determine that the only way to do it is to purchase the whole town. To make this work, they send MacIntyre (Peter Riegert) to negotiate the purchase of the sleepy town of Ferness. To assist, the company provides him with Oldsen (a very young Peter Capaldi) as a pseud-local and local representative of the company. The two travel to the town, acquire a wounded rabbit, and take up temporary residence in the local hotel, run by Urquhart (Denis Lawson) and his randy wife Stella (Jennifer Black).

From here, things happen that are both along the lines of a standard comedy and quite different in other ways. Urquhart soon realizes that this deal will be a goldmine for the townspeople and that if Knox Oil is serious about its plans, they’ll be willing to pay through the nose for the rights to the local area. It’s also evident that Urquhart, who is both the local accountant as well as the innkeeper, may live in a tiny little town but is something very different from a rube.

The fun of the film comes in the misdirections that happen. The townspeople, realizing that there will soon be more money than they could have dreamed, decide to milk the company for as much as they can get. They do this by pretending to be heartbroken at the thought of leaving their little village even though virtually all of them want nothing more than to cash in and get out. MacIntyre starts to have second thoughts about the whole thing because he discovers that the little town has far more charm than he’d have guessed. Oldsen finds himself charmed as well, but not by the town. His eyes are fixed on Marina (Jenny Seagrove), a researcher for the company who believes that the hubbub is about her proposed oceanographic facility.

The cast is rounded out by Burt Lancaster who plays the president of Knox Oil and Gas, Felix Happer. Happer is as much a character as everyone else. For starters, he’s obsessed with the night sky and believes that he is on the verge of discovering a new comet. In fact, he charges MacIntyre to keep a watch on the sky every night, focusing on what he can see in and around the constellation Virgo. Second, he has a therapist (Norman Chancer) who he pays to abuse him verbally and mentally as a way to keep a check on his own ego. Eventually, Happer comes to the small town, too, discovering a kindred spirit in the old man who lives on the beach.

The truth of Local Hero is that it’s nothing particularly special or unique. It’s simply very, very good. It’s solidly entertaining all the way through, and it feels much shorter than its running time because it is so much fun to watch unfold. One of the strongest points is the characters themselves. Happer is really the only character who plays like a comedy film character because he’s far more extreme than the others in his oddities. The rest of the characters—MacIntyre, Marina, Oldsen, Urquhart, and the rest—are certainly strange in places, but they are all believably strange. There’s nothing so odd as to be noteworthy. They’re mildly quirky the way real people are. That’s difficult to find in comedies, where type is generally played as broadly as possible, so it’s a real strength here.

While there are some interesting complications here, there aren’t a lot of surprises. It’s not really that kind of a movie. Since it’s a comedy, it’s pretty much a guarantee that things will all work out in some way in the end, and everyone will get something, even if it’s not everything they want. This is the sort of movie to pop into the player when you want to snuggle up with your sweetie and watch something that will put a smile on both of your faces for the duration. It’s sweet and it’s cute and it’s fun.

Is it must-see? Oh, probably not. It’s not going to offend anyone and it’s sweet enough that I can’t imagine someone not enjoying it at least a little. Sometimes, that’s enough.

Why to watch Cristo si e Fermato a Eboli: It’s meditative?
Why not to watch: Not a damn thing happens.

Why to watch Local Hero: More charming than you’d think possible.
Why not to watch: Parts are more predictable than they should be.