No Child Left Behind 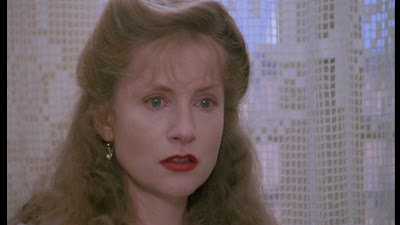 I don’t think I have ever liked a character that Isabelle Huppert plays. This doesn’t mean that I don’t think she’s a good actor or that I don’t like her films. It just seems that she plays either loathsome characters, people with massive personality defects, or people who seem broken by their own personal choice. She’s no different in Une Affaire de Femmes (Story of Women), the best of her films I’ve seen to date. Yeah, I’m tipping my hand.

Marie Latour (Isabelle Huppert) lives with her two children, Pierrot (Guillame Foutrier/Nicolas Foutrier) and Mouche (Aurore Gauvin/Lolita Chammah) in Vichy France (I think—there’s a lot of commentary about Petain, at least) during World War II. Her husband has been sent to Germany as a worker, leaving her to make ends meet as best she can. She hits upon a new moneymaking scheme when her neighbor turns up pregnant. The neighbor’s boyfriend/husband is about to be shipped to Germany himself and doesn’t want any commitments. So Marie assist her in aborting the baby. This happens just as her husband Paul (Francois Cluzet) returns from Germany. As payment for this service, Marie gets a phonograph and a few records, something she prizes since she has aspirations of being a singer.

Her relationship with her husband is a rocky one. He quickly gains and loses a job, forcing her to become the family breadwinner. She encounters a local prostitute named Lulu (Marie Trintignant) and confesses her ability at solving that particular female problem. This soon becomes a cottage industry for Marie, helping women who have become pregnant by the occupying German forces or who have become pregnant while their husbands are away. Soon the family is living well, which doesn’t do much for Paul’s ego.

Eventually, the family has enough money and moves to a large house near the sea. She is eventually followed there by Lulu. For additional money, Marie decides to rent out one of her rooms to Lulu to use with her clients. One of those clients is a young man named Lucien (Nils Tavernier), who quickly develops a crush on Marie, which is returned despite the fact that Lucien has all the earmarks of being kind of a misogynist ass.

And then a couple of events happen that shake up this little world that Marie has created for herself and her family. The first is that one of her clients dies from her procedure, and the woman’s husband is so distraught over the death of his wife that he throws himself under a train, orphaning their six children. Marie discovers this when the children’s aunt pays her a visit and offers her money for the botched procedure, money that Marie happily takes. The second is that Paul discovers her affair with Lucien and decides that his complete emasculation needs to be dealt with in a more permanent manner.

I knew what that was going in because I watched this on Hulu+, and the short synopsis of the film manages to spoil the ending. It would be nice if someone figured out that giving away the last few minutes of the film in the two-sentence write up is a bad idea. My recommendation, therefore, is to get this from another source and to not read anything about it before you watch it, because the end is pretty impressive and also pretty damn disturbing. In point of fact, the write-up in The Book spoils the ending, too. Read the first paragraph and you know precisely what is going to happen. So don’t read it. Go over it after you’ve seen the film and then question the wisdom of spoiling what is actually a pretty good film. Don’t have what happened to me happen to you.

If nothing else, Une Affaire de Femmes gives Isabelle Huppert a character that is consistent with the other films of hers that I have seen. Marie is not a very good person. She doesn’t do anything out of compassion, but strictly for monetary gain. This is evident in no place better than when she pockets 200 francs over the body of a dead patient without a single qualm. It could easily be argued that she loves her children, but she also tends to leave them unattended frequently, doing so at the start of the film simply because she wants to go out and have fun without them.

What is interesting here, though, is the story. While the abortions she provides are certainly a major plot point, the film is smart enough to not focus on them. Instead, it focuses on the failing relationship between Marie and Paul, the two parents’ relationships with their children, and the ill-fated affair between Marie and Lucien.

In her own way, Marie is actually sympathetic, if only because every man in her life is pretty rotten to her. Paul lashes out against her because she refuses him sex and because he is unable to provide for the family. Lucien, though, treats her like dirt, and she evidently loves him for it. That’s a mindset I simply have never understood. What’s so enticing about a guy who treats you like garbage?

Regardless of this, I found Une Affaire de Femmes to be a worthy watch. It’s never a pleasant story, but it does manage to avoid being even remotely sentimental. Instead, it aims for realism and hits it, and backs this up with solid performances all the way around.

Why to watch Une Affaire de Femmes: A brutal story brutally but beautifully told.
Why not to watch: Can Isabelle Huppert ever play a likable character?