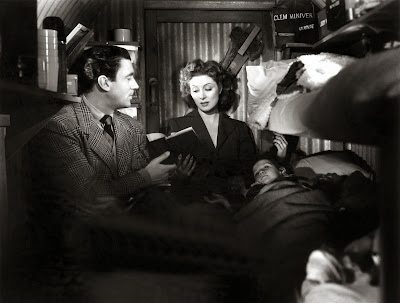 William Wyler, the director of Mrs. Miniver, grew to hate the film that won him a Best Picture Oscar. The reason is because William Wyler was a badass. In 1943, he went to London and worked on films, including documentaries about flight crews. He even flew missions with them and spent time inside a ball turret. The reason he came to disapprove of his most critically-acclaimed film is that he realized exactly how far from reality his film truly was. Seeing just how threadbare and deprived London had become due to the war and the Blitz, Mrs. Miniver simply didn’t go far enough.

Regardless of its detachment from the real horror of wartime England and rationing, Churchill loved Mrs. Miniver and said it was propaganda worth 100 ships. As it happens, I’m reading a book called Citizens of London about Americans in London during the Blitz and after. A day or two ago, I reached the section about Hollywood in London, which is more or less what inspired me to watch Mrs. Miniver now. Having read the first dozen chapters or so and seeing the incredible privation that London and England actually experienced, it’s difficult to rationalize the nice clothing and perfect hair and full refrigerator with what actually happened. Then again, that’s about the only thing with which I have a problem here.

Mrs. Kay Miniver (Greer Garson) is a typical upper-middle class housewife leaving on the outskirts of London with her husband Clem (Walter Pidgeon) and two of her children, young Judy (Clare Sandars) and just-past-toddler Toby (Christopher Severn). The Minivers have an older son, Vin (Richard Ney), currently away at college. The family lives well, complete with servants and free cash to spend on new hats and new cars. As the film starts, the kindly local stationmaster, Mr. Ballard (Henry Travers, immediately recognizable as Clarence the angel from It’s a Wonderful Life), has bred a new rose he dubs the “Mrs. Miniver” because our lead character has always been so nice to him.

In fact, it’s this rose that concerns some of the first conflicts in the film. The local dowager nobility, Lady Beldon (Dame May Whitty) has always been the only entrant in the rose competition of the local flower show. When Ballard plans to enter his rose in the competition, it creates a scandal, one Lady Beldon’s granddaughter Carol (Teresa Wright) hopes to defuse. This brings Carol into contact with Vin, who is righteously indignant about upper class privilege. If you think this means that Vin and Carol are going to fall for each other, you’ve seen more than your share of meet-cutes.

Anyway, the war starts and Vin enlists in the RAF and soon after proposes to Carol. This brings down the wrath of Lady Beldon, who turns out to be decent under her gruff and blustery exterior. Vin starts flying missions and the Minivers get on with their lives. Clem assists in the evacuation of Dunkirk. Through a series of unusual events—one of the better sequences in the film—Mrs. Miniver captures a downed enemy pilot (Helmut Dantine). And life continues. The family spends nights in their bomb shelter, the house is ravaged by enemy bombs, and life goes on, except for those situations in which it doesn’t. There’s a war on, after all.

Despite how much of a deal I made of it at the start of this, it’s not really that important that Mrs. Miniver doesn’t reflect the actual reality of England during the Blitz. It doesn’t truly affect the story one way or the other that Greer Garson’s hair is always perfect or that the local flower show goes on despite the bombing. These are surface trappings for the story that goes on behind it. That story isn’t about privation or suffering, but about the stereotypical British attitude of perseverance and determination, the dogged ability to carry on with what is right and proper no matter the surrounding circumstances. That is the story behind Mrs. Miniver, and that is what made it such effective propaganda.

And really, despite Wyler’s eventual objection to the film, Mrs. Miniver wouldn’t be nearly as effective if it depicted privation and suffering more than simply the problems of dealing with the war itself. People would become so focused on the threadbare clothing that they’d lose track of the actual story here, and it’s the story of people standing up under severe pressure, of people dealing with sudden tragedy in their midst, that is the central point of the film. We don’t want to see a gaunt and ragged Greer Garson being noble. We want to see Greer Garson.

The performances are textbook 1940s. Greer Garson is excellent, and she’s everything you expect from a housewife in a 1940s film—elegant, smart, decisive, and a little too close to perfect. The same can be said of Walter Pidgeon as her husband. It’s nice to see a film where the man (in truth, all the men) are actual characters and still take a backseat to the women. Oh, sure it’s dowdy and fussy at times and still mired in that world of women doing women things, but Kay Miniver is our hero. She is capable, dedicated, a loving wife and mother, and completely unflappable. She’s great, even if everyone seems a little too much out of central casting. This is true in spades for Dame May Whitty as Lady Beldon, and yet she still pulls it off beautifully. It’s impossible to repress a smile most of the time she’s on screen.

So while Mrs. Miniver may well be propaganda designed to help fuel the American desire to support Britain and the war effort, it’s excellently made propaganda that works. These are people we like and with whom we identify, and their struggles and problems become our struggles and problems. It’s not difficult to see why this was such a popular film in the U.S. as well as in the U.K., despite not really depicting reality. Sure, it’s idealized. What propaganda isn’t?

Why to watch Mrs. Miniver: One of the best pieces of propaganda you’re likely to see.
Why not to watch: It hardly reflects reality.